Advocates for the homeless say it is an obvious solution to the threat the new coronavirus poses in crowded shelters: Put the mass of empty hotel rooms left vacant by the sudden collapse of tourism to good use.

Many cities across North America have come to the same conclusion, as experts warn that homeless people are among those most at risk from COVID-19. Not only do they live in cramped shelters, but they often suffer from other health problems and addictions.

On a smaller scale, the use of hotels as an alternative to large and crowded shelters long predates the current crisis, including in Toronto, which has long used such properties to house homeless families. Now, many say ramping it up is a matter of life and death. Hotel rooms can allow the most vulnerable in the homeless population, or those who test positive, to self-isolate, while freeing up space for those left behind in shelters to try to maintain two metres of physical distancing.

But the pace and magnitude of the response varies greatly from city to city.

In New York, hit especially hard by the virus, the city has opened 700 hotel rooms for homeless people, reserved for those who test positive for COVID-19 or who are more than 70 years old. But the city’s total shelter population tops 60,000, and it has already seen 274 homeless people test positive and 14 die.

“We are not seeing the level of response that we want to see,” said Giselle Routhier, the policy director of New York’s Coalition for the Homeless. “We’ve been calling on the city to open up what will probably need to be tens of thousands of hotel rooms.”

In Toronto, where city officials said earlier this week that at least eight homeless people have tested positive, the city has opened about 300 new spaces in disused community centres and leased 1,200 hotel rooms. It also opened a new 200-bed isolation facility in a west-end hotel this week.

But as of Wednesday, officials said only 313 homeless people had been moved out of the city’s network of crowded shelters for single adults, which sleep 4,500 a night, many as little as 75 centimetres apart. Another 100 men were to have been moved out of Seaton House, one of the city’s largest downtown shelters, and into hotels by Friday, after a resident there tested positive.

The city says it has been assessing who is most at risk and ensuring the new hotel spaces are properly staffed with shelter workers. But nurse and long-time homeless advocate Cathy Crowe says Toronto is moving too slowly.

“Why is it not happening in a massive, military-like operation?” Ms. Crowe said. “It needs to be fast. There need to be buses pulling up and staff allocated to take them there.”

Christopher Martin, a legislative advocate with campaign group Housing California, said the state appears to be ahead of other jurisdictions. But it also has the largest homeless population in the United States, estimated at 151,000 – more than 100,000 of whom do not sleep in the warm-weather state’s shelters.

“It is not some small task. Getting that many people into hotels and motels and keeping them is going to be quite the task for the state,” Mr. Martin said.

Montreal, which has already seen a homeless man die of COVID-19, has so far decided not to move its shelter population en masse into hotels, although it has commandeered one to serve as an isolation centre, as well as a former hospital. It did open 350 new beds, separated by dividers, at four recreation centres in order to allow for more space at its other shelters, which typically accommodate about 1,000 homeless people a night.

Matthew Pearce, chief executive officer of the Old Brewery Mission, which operates Montreal’s largest shelter for men, said the moves have allowed his facility and others to create more physical distancing. For now, he said, the city’s homeless appear to be avoiding the worst.

While hotels are better than crowded shelters, he warned they are not without their challenges. Proper staffing, and thorny issues such as how to mitigate the risks of drug use, need to be worked out.

“We shouldn’t look at the idea of accessing hotels through rose-coloured glasses,” Mr. Pearce said, arguing that any plan should include the goal of moving homeless people into permanent housing, not back to shelters, once the danger passes.

In Calgary, the Alberta government overruled Mayor Naheed Nenshi’s plan to house more homeless in hotels in response to COVID-19. Community and Social Services Minister Rajan Sawhney said it would take too long and that rooms needed to be suicide-proofed, with curtains and long cords removed. Instead, spillover shelter space has been opened in a downtown convention centre, with hotel rooms reserved as isolation spaces for homeless people who test positive.

In British Columbia, the government has announced 23 COVID-19 care facilities for the homeless with 900 spaces, including one in a converted hotel in Vancouver’s Downtown Eastside, where living rough and opioid addiction are persistent issues. The CBC reported on Thursday that a shelter in the neighbourhood had reported its first case of the coronavirus. Vancouver has also opened extra conventional shelter space in community centres. 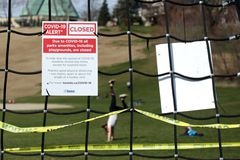