It was two days after the deadliest mass shooting in Canadian history. At the same time, the local effects of the global pandemic were also still coming clear, two separate, but interwoven threats. The news conference that day would volley back and forth between the two, the deadly spread of a virus, the deadly actions of a man.

The death toll of the shootings would swell to 22 victims, plus the shooter himself. The number of dead from the coronavirus, 16 and rising.

Either of these historic events would be, on their own, devastating and paralyzing. But in Nova Scotia, and the country beyond, residents, police and emergency services have had to respond to the trauma of the shooting and the pandemic simultaneously.

Usually, friends and neighbours can help each other through times of tragedy by bringing over a casserole and offering a hug. Communities gather shoulder-to-shoulder for vigils and funerals.

But how do people come together to grieve such profound losses and traumas, at a time when they are required to stay apart?

Misogyny is often behind the acts we deem ‘senseless’

At the blocked-off access point to Portapique Beach Road, about 120 kilometres north of Halifax, where the violence began, some mourners appeared in medical masks as they placed paper hearts, stuffed animals and bouquets of flowers at the scene.

Gabrielle Sullivan-Sparks wore blue plastic gloves as she placed a lantern decorated with white ribbons and a hydrangea on Tuesday, specifically in honour of Constable Heidi Stevenson, who was killed in the attack, and all fallen law enforcement.

“I just wanted to do something,” she said. “I wanted them to know they’re not forgotten.”

Others in the area brought police cases of water and pop, leaving carafes of Tim Hortons coffee and boxes of muffins and doughnuts on the hoods of the RCMP vehicles blocking the road, knowing officers could not approach to accept them.

Many family and friends who would normally have rushed to Nova Scotia after the attacks were instead unable to travel to the province, and would, in any event, face two weeks of isolation before they could circulate in the community if they did get there. Journalists from out of the province and the country who would normally have gone to document and report on the shootings were similarly restricted, and were denied exceptions to the isolation requirement.

Jocelyn Smith, who lives in Calgary, lost her lifelong friend Lisa McCully in the attacks. She says it is particularly painful not to be able to go home to New Brunswick to mourn with the community where they grew up.

“It’s really difficult to not be able to see each other, to hug each other and to share stories about Lisa,” she said, her voice cracking.

While small pockets of people still gathered in the close-knit communities in the days after the attacks, most appeared to be doing their best to adapt to the current restrictions. People hung hearts in windows and driveways, and attended memorial sites in their vehicles.

Websites have been set up for condolences, including a site set up by the RCMP in honour of Constable Stevenson. An obituary for another one of the victims, 36-year-old Joseph (Joe) Webber, said there would be no funeral, but a memorial procession past his home “to show support to his family while adhering to the current COVID-19 restrictions.”

“We gathered online from a safe distance as we fight the other invisible enemy,” Governor-General Julie Payette said on Friday evening as part of the opening of an online vigil to honour the victims of the shooting. “But we are connected as a country, and we are grieving together.”

Nova Scotia Remembers: A Loving Tribute for Those We Lost was streamed and broadcast live, giving people around the world a chance to take part in a virtual memorial, whether joining from down the street or around the world.

The musical portion of the tribute began with footage of the massacre’s youngest victim, 17-year-old Emily Tuck, playing the fiddle while in isolation with her parents during the pandemic. Ms. Tuck’s parents, Jolene Oliver and Aaron (Friar) Tuck, were also victims of the attack.

Patrick Curry, who owns and operates C.L. Curry Funeral Services in Antigonish and is acting president of the Funeral Service Association of Nova Scotia, said last weekend’s events would have been horrible enough, but for people to be denied the ability to have human contact in the midst of such grief is even worse.

Under current public-health rules in Nova Scotia, funerals and memorial services can be held, but are open only to immediate family, with five people or fewer in attendance, including someone from the funeral home, and with everyone observing rules around physical distancing.

While it could be tempting to bend the rules in such exceptional circumstances, the restrictions are vitally important, as outbreaks of the virus in other places – including Newfoundland – have been linked specifically to funerals. Mr. Curry says funeral homes are doing their best to give families an opportunity to hold their remembrances safely, including meeting with families over the telephone, staggering visitation times and holding virtual services.

Michael Ungar, a Canada Research Chair at Dalhousie University who specializes in resilience, says the ways that people typically respond after tragedy – the food and coffee cards, the roadside memorials and candlelight vigils – can be an important part of the healing process, connecting grieving people to their communities and helping them take back their public spaces. He says Nova Scotians in particular are “casserole people,” who show up for each other in difficult times to help.

He says it’s not yet clear whether these acts of communal mourning will have the same effects when they take place without physical contact.

“Will it work? That is going to be an interesting question,” he says. “[Is an online vigil] the same as standing shoulder to shoulder with people with a candle in your hand? I don’t know … we’re in uncharted territory here.”

The role of the pandemic in the violence last weekend – if indeed it played a role at all – remains under investigation. How physical isolation could have affected the scope and trajectory of the violence will likely never be known.

Physical isolation meant most people were home, the streets and highways quieter than they might otherwise have been. Did more people die because of that? Did fewer?

Dr. Ungar says many people’s responses to the killings in Nova Scotia may also be different because of the pandemic, as those already struggling with the stress and trauma of the coronavirus find themselves too overwhelmed to now deal with the scope of the tragedy in Nova Scotia.

Ms. Smith, the friend of Ms. McCully, says she isn’t even thinking about what it would be like to grieve her friend’s death if the pandemic wasn’t occurring.

“There’s so many what-ifs surrounding the whole situation. So many things, it’s futile,” she said. “I ruminate enough about so many of the details that I don’t need to torture myself with what-ifs.”

On Wednesday, Mr. McNeil said he’d heard about people bringing food and wanting to give police officers handshakes and hugs, and again urged people to instead find virtual ways to show support and mourn, at least for now.

“Unfortunately, it’s terrible that I have to say this, but please, we need you to not do those things,” he said. “We will get a time in the future where we can have these more direct contacts. But now, we ask people to respect the rules around physical distancing and around staying apart from each other.”

While small pockets of people gathered in some homes, the effects of the pandemic on the grieving communities were starkly apparent in the empty church halls and shuttered community centres. The places where people would normally have gathered to be together, instead sat closed and dark.

With a report from freelance writer Lindsay Jones 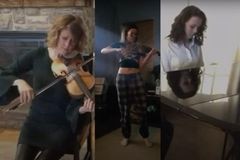