Russell and Elsie Tiljoe have deep roots in the Wet’suwet’en Nation and worry about the growing divisions between hereditary chiefs who oppose Coastal GasLink’s $6.6-billion pipeline project and elected band councillors who support it.

Mr. Tiljoe, 83, and his 82-year-old wife, Elsie, say on-reserve residents stand to benefit from jobs created by construction of the natural-gas pipeline.

But the Indigenous elders also respect the Wet’suwet’en’s hereditary house groups, which claim authority in northern British Columbia over their traditional territory located outside federal reserves.

The couple, who have been married for 65 years and raised 10 children, feel torn between being loyal to hereditary leaders and backing elected councillors promoting economic development to raise the standard of living on reserves.

“I wish our hereditary house groups could work with the elected officials,” Mr. Tiljoe said during an interview on Saturday. “Some people think that anyone who isn’t 100 per cent behind them is against them.”

The Tiljoes live off reserve at their home in Houston, B.C. The community is located near a remote logging road where hereditary leaders authorized chopping down about 100 trees in early January to block Coastal GasLink construction workers from returning to work on a section of the pipeline project.

The blockade of trees came days after a B.C. Supreme Court judge extended an injunction on Dec. 31 to stop Wet’suwet’en members and anti-pipeline supporters from blocking access to work camps.

Art Wilson, a hereditary chief with the Gitxsan Nation, drove three hours in his pickup truck from Kispiox, B.C., to see first-hand what is going on with the blockade. Taped to a fallen tree is a copy of the court’s notice to clear the way for RCMP enforcement of the injunction against protesters.

As Mr. Wilson stood on the logging road blanketed by snow, he said the blockade sends a message about the importance of defending the Wet’suwet’en’s unceded territory. “I think that when it comes down to the crunch, I would do the same and think of ways to slow down the pipeline,” he said.

Mr. Tiljoe’s father served as Namox, hereditary chief of Rafters on Beaver House, which is one of the Wet’suwet’en house groups. Ms. Tiljoe traces her lineage to back to her grandmother, who served as Knedebeas, chief of Dark House.

“My grandma would not have been in favour of what’s going on up on that road,” Ms. Tiljoe said. While she and her husband don’t support the blockade, they take a neutral view on the pipeline project itself.

They say they’re sensitive to the deep divisions within the Wet’suwet’en people when it comes to Coastal GasLink, and they avoid taking hard-line positions on the project.

Mr. Tiljoe has been a fierce critic of the federal Indian Act that imposed the system of elected band councils. But he believes it is long overdue for the Wet’suwet’en people to create an entity that would bridge the wide gap between hereditary chiefs and elected band councillors when it comes to dealing with Coastal GasLink.

One attempt at compromise met rejection, as an entity called the Wet’suwet’en Matrilineal Coalition formed to serve in a mediation role. Hereditary leaders, however, refused to recognize its formation and criticized it for receiving funding in 2017 of $30,000 from Coastal GasLink and $30,000 from the provincial government.

Mr. Tiljoe, a retired heavy-equipment operator and logging truck driver, advocates creating a new independent body, guided by Wet’suwet’en people and not beholden to Coastal GasLink or the B.C. government.

With hereditary chiefs and elected band councillors at the opposite ends of the spectrum in their views toward Coastal GasLink, it will be extremely difficult to find middle ground. “There are a lot of hard feelings out there,” said Mr. Tiljoe, who is a member of a Wet’suwet’en hereditary house group named Where It Lies Blocking the Trail. Ms. Tiljoe is a member of Dark House.

Eight years ago at a regulatory hearing in Smithers, B.C., the Tiljoes spoke out publicly against Enbridge Inc.’s now-defunct plans for the Northern Gateway oil pipeline from Alberta to Kitimat.

John Ridsdale, chief of the Wet’suwet’en’s Rafters on Beaver House, led a rally in support of hereditary leaders on Friday in Smithers.

He played down the importance of Coastal GasLink. “This is one project. That’s it. The sky will not fall without this project,” Mr. Ridsdale, who goes by the hereditary name Na’Moks, said in an interview. “We’re trying to protect environment.”

About 28 per cent of Coastal GasLink’s route across northern B.C. crosses into the Wet’suwet’en’s unceded territory.

“We’re being demonized and we’re being criminalized for upholding our laws,” Molly Wickham, a hereditary wing chief (sub-chief) with the Wet’suwet’en’s Grizzly House, told the rally.

“We’re defending our territory. We are not the aggressors in this situation,” added Ms. Wickham, who goes by Sleydo’ as her hereditary name.​ 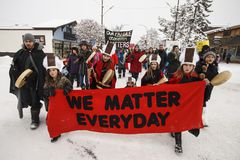 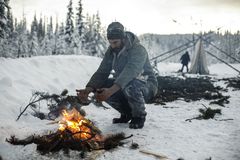