A Toronto police officer convicted of attempted murder in the shooting death of a troubled teen on an empty streetcar is seeking leave to bring his case before Canada’s top court.

Const. James Forcillo fired two separate volleys at 18-year-old Sammy Yatim, who was standing alone and holding a small knife, in an incident that ignited public outrage after a bystander’s video came to light.

Lawyers for Forcillo challenged the ruling but Ontario’s top court dismissed the appeal in April.

In upholding Forcillo’s conviction and sentence, Ontario’s Court of Appeal found Forcillo’s second round of shots was “clearly unnecessary and excessive.”

His legal team is now seeking to challenge the appeal court decision, arguing that the first and second volleys were “artificially” divided into two separate events, leading to the separate charges.

Michael Lacy, Joseph Wilkinson and Bryan Badali are asking the Supreme Court to decide whether prosecutors were required to prove that the first and second rounds of shots were two different “transactions.”

They are also contesting Forcillo’s initial six-year sentence, which was a year longer than the mandatory minimum.

In their application to the court, the lawyers write that mandatory minimum sentences are intended to deter people from committing crimes.

But the lawyers argue that when someone carrying a firearm legally uses it in good faith — as they suggest Forcillo did — that person is not deterred because they believe they’re obeying the law and therefore would not go to prison.

The Crown has 30 days to respond to the application.

The court has said it takes an average of three months to decide on leave applications after they are filed.

Forcillo recently had six months added to his sentence after pleading guilty to perjury. He had also been charged with breaching the conditions of his bail while awaiting the Ontario Court of Appeal decision, along with obstruction of justice, but those charges were dropped after he entered the guilty plea.

James Forcillo has six months added to sentence after pleading guilty to perjury: lawyers
May 31, 2018 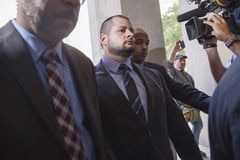