When Julian Herrche walks into his barbershop in Toronto’s Parkdale neighbourhood these days, a thought crosses his mind: zombie apocalypse.

With no customers, and his two employees on temporary layoffs, the Barking Iron Barbershop has an eerie, empty feel. Mr. Herrche checks on the shop and clears the dust that has settled on the untouched surfaces. But most of his time is spent at his second location, just 45 minutes west near Burlington, Ont., which is permitted to operate under Ontario’s regional reopening plan.

“The safety and the health of our population is number one. That said, I really think there’s a lot more the government could have done to prevent small businesses from being hurt,” Mr. Herrche says. “I find it very odd that you can go to Walmart and buy a flat-screen TV surrounded by 100 people, but you can’t sit to get a haircut when both parties are wearing masks.”

As the COVID-19 pandemic stretches on for a year, Toronto has become a flashpoint for the inherent inequities and political consequences that come with difficult public-health decisions.

The city has had some of the strictest, and longest-running, closings in North America – and the harshest on small business. On Monday, when the stay-at-home order in Toronto and neighbouring Peel Region is lifted and they enter the grey “lockdown” zone, retail stores will be able to open at 25-per-cent capacity for the first time in more than 100 days. (Big box and grocery stores have been allowed to operate throughout the pandemic, with certain limits.) But indoor dining, hair salons and barbers, gyms and recreational venues such as pools and cinemas will remain closed.

According to industry groups, the situation has become desperate. Small businesses in Ontario have accumulated $207,000 in COVID-related debt on average, according to the Canadian Federation of Independent Business.

“I’m not suggesting Ontario become Texas, and end mask bylaws and end every restriction. What we’re asking for is some alternatives to a blanket lockdown,” said Dan Kelly, CFIB president and chief executive officer.

“For goodness sake, if business lockdowns were particularly effective policy to stop the spread of COVID-19, would we have needed to maintain them for this long?” Mr. Kelly said.

By contrast, in British Columbia, retail shops, restaurants and pubs have remained open during the second wave with safety protocols in place. Only Montreal’s restaurants have been shuttered longer than Toronto’s – since Oct. 1, compared with Oct. 10 – but retail stores and hair salons have been allowed to reopen in Quebec. Los Angeles has opened stores with limits, salons and outdoor dining; New York’s indoor dining ban lasted from mid-December to Feb. 12.

With stores across the country, Canadian retail chain Mastermind Toys has seen how the different regional approaches affect businesses. It’s a tale of two pandemics.

“The toy industry as a whole was up 10 per cent in 2020,” chief executive Sarah Jordan said. “But three of our top five stores are in Toronto, and they’ve had double-digit [sales] declines – versus everywhere else in the country, it’s a double-digit increase.”

Through the winter in Toronto, Ed Pottinger has watched others in his east-end neighbourhood close up shop for good. His restaurant, The Real Jerk, has seen sales fall by 30 per cent to 40 per cent while it has been restricted to takeout.

“I am blessed by the fact that we are well-supported by the east end and the Caribbean community,” he says. He wants the government to consider allowing physically distanced indoor dining. And he’s yearning for warmer weather and a patio like the one The Real Jerk set up last year. “I’m a fool if I say I’m not worried. I hope we can survive.”

Toronto’s recovery has broader significance: The city represents 18.5 per cent of Canada’s GDP, and 38 per cent of businesses are headquartered there.

“We can’t get the country’s economy back on track, without Toronto getting back on track,” said Goldy Hyder, president and CEO of the Business Council of Canada. “We really need to have a strategy now on how we can co-exist with COVID as we await the full rollout of the vaccines.”

Lockdown measures have been intended to protect Ontario’s fragile health care system, particularly long-term care homes where more than half of the province’s deaths have occurred.

Anthony Dale, president and CEO of the Ontario Hospital Association, said the next month or two will be critical to keep COVID-19 variants at bay while more people get vaccinated.

The month of January was “absolutely punishing” on Toronto hospitals, he said. “Without that [stay-at-home order], I can’t imagine what would have happened.” Late last week, Ontario had 326 patients with COVID-related conditions in critical care, the 69th consecutive day with more than 300 patients, he said. Even at 150 patients, hospitals have to start cancelling non-COVID-related elective surgeries and procedures.

“I don’t like the way this debate in our province has at times boiled down to the binary, between either massive lockdown of the province, or protecting the health care system. When the pandemic’s over, we have to have a very good look at how we can strengthen our capability with other preventative measures such as testing and tracing,” Mr. Dale said.

The debate over the city’s closings has polarized experts and politicians alike, with Toronto’s Medical Officer of Health, Eileen de Villa, often calling for stricter measures than the province.

“It’s been a very difficult year for everyone,” said PC MPP Robin Martin, who represents a midtown Toronto riding. She called lockdowns a “blunt tool,” but a necessary one. Government has tried to be responsive to businesses’ needs, she said. “Nothing makes up for the fact that you need to have your business open and operating, and that’s where we all want to get to as soon as possible.”

But small business owners say Ontario’s restrictions have disproportionately affected them, even though smaller shops argue they are well-positioned to enforce rules such as physical distancing because they let in just a few customers at a time.

“I find it very frustrating when I do go out shopping at a big store,” said Janet Di Bernardo, co-owner of Latitude 44 Gallery Framing Decor in Toronto’s Junction neighbourhood. The artists whose work she sells are also struggling: the gallery has hosted some virtual shows, but made very few sales. “You see all these people not necessarily following the directions. When little businesses are responsible, and they’re not able to function, it’s tough.”

There are more perilous consequences, too: Davina Lopez, owner of Davina’s Swim House, has three swim schools in Toronto that have been closed since November after offering limited lessons this summer. “It’s dangerous. It’s life or death for a lot of children. They need to know how to swim,” Ms. Lopez said.

Mixologist Evelyn Chick has seen how people are missing their local watering holes. She and a partner have sold 1,500 at-home cocktail kits through their web store since November. And Ms. Chick has been busy playing host to online get-togethers.

“You can shift to virtual, but it doesn’t compare to the emotional connectivity that bars and restaurants provide,” she says, adding these businesses help shape the fabric of the city.

Toronto Mayor John Tory said last week he’s “really, really” sympathetic to what businesses have been through, but the worst possible outcome would be to reopen and then quickly close again. His city is taking a much more cautious approach – and politicians will be judged for it.

“You stand or fall on the decisions you make,” Mr. Tory said, “whatever your detractors or supporters have to say.” 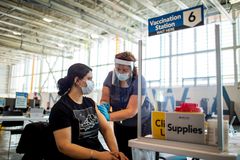 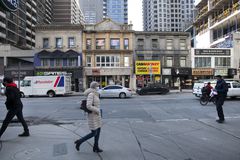 Follow Susan Krashinsky Robertson and Laura Stone on Twitter @susinsky @l_stone
Report an error Editorial code of conduct
Due to technical reasons, we have temporarily removed commenting from our articles. We hope to have this fixed soon. Thank you for your patience. If you are looking to give feedback on our new site, please send it along to feedback@globeandmail.com. If you want to write a letter to the editor, please forward to letters@globeandmail.com.
Comments