Toronto public health officials are asking for federal and provincial funding to set up a voluntary centralized quarantine system for low-income people who live in cramped apartments and cannot afford to self-isolate after testing positive for COVID-19.

The proposal from Medical Officer of Health Eileen de Villa, to be discussed at the Toronto Board of Health’s meeting next week, contains few details and no cost estimates. It points to initiatives in Chicago and New York, where hundreds of hotel rooms have been made available to those who test positive but have limited options for self-isolation.

It’s a response to data released last month that shows the Toronto neighbourhoods hardest hit by COVID-19 are in the city’s northwest and northeast, where large numbers of recent immigrants live, many of them low-income, with extended families living in cramped conditions.

Joe Cressy, the city councillor who chairs Toronto’s Board of Health, said that even as the city reopens, the virus is still hurting the city’s poorest and that action is urgent.

“People who are poor and unable to isolate properly at home are at not only higher risk – but because they can’t isolate at home, their relatives and roommates are at higher risk,” Mr. Cressy said.

He said discussions with federal health officials are already under way and that Ottawa has indicated it is interested in supporting the initiative. But Mr. Cressy said the province has not shown a willingness to help.

However, Premier Doug Ford told reporters on Wednesday that his government was planning to offer a “substantial” amount of additional money to municipalities to help deal with all aspects of COVID-19.

Medical experts say self-isolation is near impossible for many people in Toronto’s poorest neighbourhoods. They may share bedrooms with others and live in apartments with a single washroom used by parents, grandparents or other relatives. And many have jobs – to which they must take public-transit – in hospitals, grocery stores or other essential services that put them at greater risk of contracting the illness.

Lauren Lapointe-Shaw, a scientist with the Toronto General Hospital Research Institute, says crowded households can nurture the virus: “We know that when there are many people sharing a dwelling, that acts as a reservoir for COVID-19, as it cycles through the various family members … and then can infect others.”

According to Toronto Public Health, Chicago’s COVID-19 isolation facility is a hotel, where rooms and meals are offered free of charge to people with mild cases who do not have space to isolate themselves at home. In New York, the city offers what it calls “Take Care Hotels” free of charge and has 1,200 rooms available, with plans to expand to 3,000.

Mayor John Tory said he supports establishing something similar in Toronto, but that the city will need help from at least Ottawa to make it happen. He also said with lower daily tallies of new cases – Toronto counted 73 new cases on Wednesday – and the need to house people for only a 14-day isolation period mean the costs would be “reasonably manageable.”

Toronto has already leased hundreds of hotel rooms to use as homeless shelters and as special isolation centres for homeless people who test positive, and while it has received some federal and provincial money for this effort, it says it will need more to cover just these costs.

The proposal for new quarantine centres comes on top of pleas from Toronto and other cities for provincial and federal money to cover billions of dollars in municipal budget shortfalls resulting from the pandemic. Toronto alone has said it is facing a financial hole of at least $1.5-billion, after public-transit ridership evaporated.

But getting aid to municipalities has been caught up in a jurisdictional back-and-forth between Ottawa and the provinces. A recent offer by the federal government to provide $14-billion to provinces for a long list of priorities, including municipalities, was deemed inadequate by mayors and premiers across the country.

Mr. Ford reiterated Wednesday that Ottawa needs to contribute more for cities. He also said Queen’s Park would be offering municipalities new cash, but did not provide details: “We’re going to make sure we put our money where our mouth is, too, and give the municipalities a substantial amount of money, right up to our capacity.”

Rising rates of COVID-19 in children, adolescents spark concerns about back to school plans
June 23, 2020 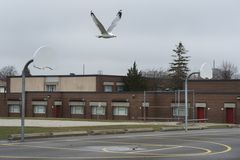 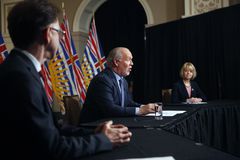 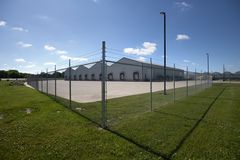