Health and political leaders in Toronto and neighbouring Peel Region want pandemic restrictions eased slightly to allow more in-person shopping and an end to the stay-at-home order put in place seven weeks ago.

They made the call for a less restrictive set of rules on Wednesday amid drops in the overall number of infections, compared to earlier this year, but an increased incidence of COVID-19 variants that are more easily transmitted. Many types of businesses would remain closed, including museums, hair salons, gyms and cinemas. Indoor dining would still be prohibited.

While the decision on whether to change the pandemic rules rests with the province, the top doctors for both Toronto and Peel say the time is right for a modest step in the direction of normal life.

Toronto Mayor John Tory acknowledged the difficulties endured by local businesses but said that moving too quickly and risking a return to severe restrictions was the worst possible scenario.

Their calls were coupled with growing unhappiness about how the province is distributing its vaccines.

Mississauga Mayor Bonnie Crombie, whose city is the most populous in Peel, urged the province to allocate its vaccine supplies “on an ethical basis” based on risk – arguing the region and other hard-hit areas should be vaccinated sooner.

“The province of Ontario needs to prioritize the hot zones,” Ms. Crombie said, alleging that the current per-capita distribution plan was unfair and contrary to the advice of the province’s own COVID-19 special advisory table.

Earlier this week, Toronto said the city was lagging in vaccinating residents over 80 because the province’s distribution of vaccines did not take into account the city’s high number of health care workers and others who must receive their jabs first.

About one in nine Canadians live in Toronto and Peel, which have been particularly hard hit by COVID-19 and were put under escalating restrictions in November and December. A stay-at-home order was imposed on Jan. 14. The order, which had a number of exemptions, was reviewed by the province but maintained in late February. It was lifted for most other regions last month.

On Friday the provincial cabinet is expected to consider whether to remove pandemic rules governing these jurisdictions and shift them into a colour-coded framework of restrictions. The most severe category of restrictions in this framework, the grey level, is what Toronto and Peel are asking for.

Under grey restrictions, retailers that have been relying on curbside pickup would again be able to offer in-store shopping, subject to capacity limits.

“Overall, case counts at present call for a cautious approach that will allow us to reopen and to do so as safely as possible,” Toronto Medical Officer of Health Eileen de Villa said Wednesday, though she added there’s concern about the recent rise in variant cases.

Her calls for restraint were echoed by her counterpart in Peel, Lawrence Loh. “Chasing normal too quickly could mean losing the progress that we’ve made to this point,” he said Wednesday.

Dr. Loh noted that Peel’s overall infection rate – the province’s highest – has increased slightly over the past week. He called for Peel to remain in grey for at least two weeks.

Mississauga’s Ms. Crombie said Wednesday that while she had advocated for a move into the red zone – one looser than grey – after seeing the latest COVID-19 numbers, she understands why Dr. Loh had recommended against it. She called for the restrictions to be reviewed weekly. And she was aggravated by the inconsistency that allows more businesses to open in adjacent Halton Region.

Another neighbour, York Region, was moved last week to red-level restrictions at the request of its local Medical Officer of Health. Karim Kurji believes that his region, despite having an infection rate similar to Toronto and Peel, can avoid a variant-fuelled third wave.

Many Southern Ontario businesses have been chafing under lockdown restrictions that date, in various forms, to November.

Dr. de Villa warned that the reopening process must be slow.

“Reopening widely, such as [moving past grey to] the red category of the provincial framework, is not advisable at this time,” she said.

“Moving out of the stay-at-home order is a reasonable course of action for Toronto, although … moving back into grey status is and will be a delicate balance.”

With a report from Stefanie Marotta 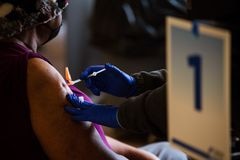