Police have charged a young man in the Easter weekend slaying of a Good Samaritan who took him in.

Makoons Meawasige-Moore, 23, was charged on Monday with second-degree murder in the fatal beating of Paul (Doc) Morgan, a 79-year-old dentist who was found dead in his Toronto home on April 14.

Dr. Morgan had been acting as a surety for Mr. Meawasige-Moore, who was on bail pending trial on other charges, and living in the house with Dr. Morgan, family friend Michael Lavelle said.

In 2017, Mr. Meawasige-Moore was charged in several arsons in West Toronto. At the time, a relative of his prevailed upon Dr. Morgan to take a chance on supervising him so he wouldn’t have to stay in jail.

But the arrangement had been spiraling out of control, Mr. Lavelle said.

“The kid was continually in trouble," he said. “Doc had him out of the house. And then there was more trouble. And Doc got him again. It was this never-ending saga. Doc knew he was in over his head – but he couldn’t say no to his friends.”

Mr. Lavelle said he had tried to raise complaints about the surety situation to police and to the courts this spring, but they went nowhere as distancing measures to fight the coronavirus were beginning.

Toronto homicide Detective-Sergeant Keri Fernandes confirmed Mr. Meawasige-Moore lived with Dr. Morgan as part of the release conditions. She said police would likely investigate any complaints about possible bail breaches if any were formally raised.

Lawyers say the criminal-justice system is extraordinarily difficult to navigate right now. “I can’t imagine how the average member of the public would know how to access these services at this time,” said Daniel Brown, a vice-president of the Criminal Lawyers’ Association. “Not every courthouse has the capabilities of facilitating surety revocations right now.”

Dr. Morgan was known as a friend to many Northern Ontario communities, including several First Nations. Since the 1960s, he had taken trips to the region, cultivating a reputation as a man who could befriend anyone at the drop of a hat.

During the 1990s and 2000s, he ran a rustic fly-in fishing lodge for tourists north of Elliot Lake, but he often invited strangers to it and paid their way.

Yolande Nashkawa of the Sagamok Anishnawbek First Nation knew Dr. Morgan for more than a decade. She said that when she was a struggling single mother, he hosted three of her sons at the lodge. He also paid for braces for one of them.

Now she wonders whether her friend’s generosity was his undoing. “It’s something that a lot of us are going to struggle with for some time,” Ms. Nashkawa said. “Indigenous kids and families [benefited from] his love – and the fact that it may have been one of our own that participated in this [crime] is very tragic.”​ 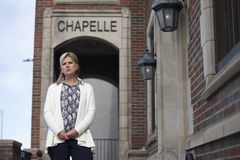 Follow Colin Freeze and Sean Fine on Twitter @colinfreeze @seanfineglobe
Report an error Editorial code of conduct
Due to technical reasons, we have temporarily removed commenting from our articles. We hope to have this fixed soon. Thank you for your patience. If you are looking to give feedback on our new site, please send it along to feedback@globeandmail.com. If you want to write a letter to the editor, please forward to letters@globeandmail.com.
Comments are closed