A Toronto police constable, already charged with corruption in connection with tow truck and rental car businesses he was operating on the side, is now facing a swath of additional fraud charges, as the city’s police force continues an internal investigation into towing-related organized crime.

When he was initially charged last summer as part of an investigation dubbed Project Overhaul, Constable Ronald Joseph was accused of receiving payments and kickbacks and providing a police radio to tow-truck drivers, in order to help them get a heads-up on car crash scenes.

Now he is alleged to have been involved in a series of frauds involving insurance claims and car crashes that were either staged or made up entirely.

A dozen other people (some of whom had similarly been previously charged last summer) are also facing fraud charges.

“Ron [Constable Joseph] is sort of the common denominator,” Toronto Police Service Superintendent Domenic Sinopoli said, saying that he established his contacts through both his policing work on the road and through his rental car business, Renters Everything.

Four other TPS officers have also been investigated as part of Project Overhaul. None of them has been charged criminally, and not all have been charged under the Police Services Act, or even suspended.

One of those officers, Constable Brian Smith, pleaded guilty under the Police Services Act to one count of discreditable conduct, in connection with a false police report and fraudulent insurance claim he filed for $9,421, allegedly at the behest of Constable Joseph.

In his decision in late January, the hearing officer in the case wrote that Constable Smith “should have known that this behaviour has elements of a criminal offence.”

Constable Smith’s penalty was a demotion in rank for a period of 30 months. He will not be charged criminally, TPS said, because the information came to police through a compelled statement. Supt. Sinopoli acknowledged that this could be seen by the public as a double standard.

“Essentially what it comes down to is: Do we have the evidence to pursue Brian Smith criminally? And the answer to that was no,” he said. “So now you take criminal off the table, you’re able to compel a statement and what you’re doing is building a case against him from a Police Services Act perspective, but also building that case against Ron Joseph and/or any other accomplices tied to it.”

Since 2018, tow-truck drivers have been engaged in a deadly turf war, burning trucks and shooting at each other as they fight over slices of the business. At least four men with ties to the industry have been killed.

Three Ontario Provincial Police officers and three Ottawa Police Service officers have also been charged in the past year with towing-related corruption. 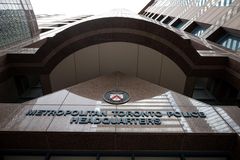