An off-duty Toronto Police officer testified he was trying to disarm Dafonte Miller when he repeatedly punched Mr. Miller “as hard as I could.”

Michael Theriault, who was testifying at his own assault trial on Tuesday, is jointly charged with his brother Christian Theriault with aggravated assault in the December, 2016, beating of Mr. Miller. They are also separately charged with obstruction of justice for misleading the police who investigated the incident. Michael Theriault has been suspended with pay since he was charged in 2017.

Mr. Miller, a 19-year-old black man, was hit in the face with such force that he had to have his eye surgically removed.

In the past two weeks of the judge-only trial at the Superior Court of Justice in Oshawa, the Crown built a case that Mr. Miller and his friends were walking in a residential Whitby neighbourhood in the early hours when the Theriault brothers allegedly confronted them, chased Mr. Miller and severely beat him with their fists and feet as well as with a metre-long pole or pipe. Mr. Miller testified that two blows to his face with that pole, allegedly used by Michael Theriault, caused his eye to “burst.”

Michael Theriault’s lawyer, Michael Lacy, opened his questioning of his client Tuesday by asking specifically who wielded the pole. Michael Theriault replied that it was Mr. Miller.

Michael Theriault told court he and his brother went to their garage to have a cigarette in the early morning of Dec. 28, 2016. While there, they heard the sound of their parents’ pickup truck doors closing.

Michael Theriault recalled he told his brother to open the garage door and he rolled underneath. He spotted two men in the truck, and they fled in two directions.

Michael Theriault said he did not know if they had stolen items from the car or had plans to hot wire it, but believed a crime had been committed so he decided to chase one of them, Mr. Miller, and called out to his brother to follow him.

He told court he was dressed in a T-shirt, jeans and socked feet. He testified he wasn’t armed with any weapons. He said he did not identify himself as a police officer, tell Mr. Miller to stop or ask him what he was doing.

As he ran down the street, Michael Theriault said Mr. Miller veered off the road into a dark space between two houses. In his extensive cross-examination of Michael Theriault, Crown attorney Peter Scrutton repeatedly asked why the off-duty officer pursued Mr. Miller with such perceived recklessness, which seemed to run contrary to his police training.

“You’re so concerned about apprehending one of two people who may have been stealing change or sunglasses from your parents’ car that you’re running into a dangerous area?” Mr. Scrutton asked. “It happened very quickly,” Michael Theriault said.

“Once he pulled out the pole pretty much all hell broke loose and that’s when I was very fearful,” he testified.

The Theriault brothers’ lawyers have suggested Mr. Miller retrieved the pole from one of the houses on the street close to where they fought. Michael Theriault said he started punching Mr. Miller in the face and body to make him drop the pole. Later, he said he punched Mr. Miller in an effort to get him to stop punching his brother.

He testified that at no point did he or his brother strike Mr. Miller with the pole; he only held it up when there was a lull in the fight, the point at which Mr. Miller walked to the front door of a house and banged on it, asking the occupants to call 911.

Christian Theriault also called 911, and told the operator that all three of them were “bloodied” and that Mr. Miller had tried to break into their house. When the tape was played in court, Michael Theriault said he did not know why his brother had said those things. The Theriaults later told police they were sore; only Mr. Miller was bleeding and had major injuries.

"I'm going to suggest you throw away this pole at this juncture because you're trying to disassociate yourself from it," Mr. Scrutton said. "You both know you brought it to the scene that night, and you know how bad it looks."

“That’s not at all true, sir,” Michael Theriault responded.

The trial will resume in January, when Justice Joseph Di Luca will hear closing arguments. 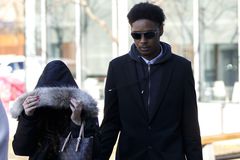 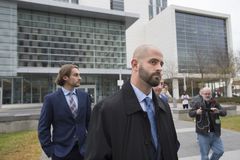 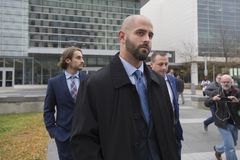