After years of promoting vaccine safety, public-health officials across Canada are now taking a more aggressive approach in combatting false information about vaccines by advocating for a crackdown on those who propagate dangerous messages. The latest move is by Toronto Public Health, which is asking the city’s Board of Health to adopt a series of recommendations to counter anti-vaccine messages.

The recommendations include asking Health Canada to look at ways to reduce the spread of misinformation about vaccines. They will be considered at a Board of Health meeting Monday.

Vinita Dubey, associate medical officer with Toronto Public Health, said the proliferation of misinformation highlights the need to do more to reach those who might be swayed by anti-vaccine messages.

“What’s coming out now is the clearer link to the misinformation on the internet,” Dr. Dubey said. “The timing actually seems really important and right for people to hear this message and for us to be pro-active about it.”

In addition to asking Health Canada to look at ways to reduce misinformation online, Toronto Public Health also wants the Board of Health to ask the World Health Organization to create new rules to prevent anti-vaccine groups from promoting or advertising false messages. Earlier this year, anti-vaccine group Vaccine Choice Canada posted billboards across the Greater Toronto Area questioning the safety of vaccines. And the agency also wants the Board of Health to ask health professional organizations across Canada to talk to their members about how to address vaccine hesitancy.

Other organizations are also responding to the pervasiveness of false anti-vaccine messages as the number of measles cases rises in Canada and around the world. The World Health Organization declared vaccine hesitancy a top global health threat for 2019. Earlier this year, the Public Health Agency of Canada said it would create new social-media campaigns to counter anti-vaccine myths and promote the proven safety of vaccines. The agency is working with social scientists to determine what is driving anti-vaccine beliefs.

Last month, the journal Canadian Family Physician published new clinical guidelines to help doctors talk to patients who may be vaccine hesitant. And last fall, the Canadian Paediatric Society published recommendations aimed at vaccination programs, clinics and health-care practices on how to approach vaccine-hesitant patients and work with those groups to improve vaccination rates. In Britain, Health and Social Care Secretary Matt Hancock recently said he wants to introduce legislation that would force social-media companies to remove anti-vaccination content.

Public-health organizations have long promoted the safety and efficacy of vaccines. But the spread of false information online is making many officials realize that they need to counter anti-vaccine messages with focused, science-based campaigns that can reach people who may be vaccine hesitant, said Tim Caulfield, Canada research chair in health law and policy at the University of Alberta.

“What I think has changed is the idea that we have to be actively engaged in this conversation,” he said. “We can’t be passive.”

Mr. Caulfield said it’s unclear how successful some of those measures will be, but it reflects a growing sense of urgency around the topic. Public health faces a difficult task, as the anti-vaccine community is well-versed in creating convincing narratives and using fear-mongering tactics to get people to doubt the safety of vaccines, he said.

“Fighting this information is not easy,” Mr. Caulfield said. “It’s not just providing accurate information. You’ve got to do it in a way that’s meaningful and engages the right communities."

At Toronto Public Health, Dr. Dubey said they are hoping to reach out to the vaccine hesitant – people who aren’t necessarily anti-vaccination, but could be swayed if they are exposed to false information about vaccines.

According to a survey conducted earlier this year by the Angus Reid Institute, one in four Canadians said they believe vaccines pose a risk of serious side effects. About 30 per cent of respondents said the science on vaccines is not clear. 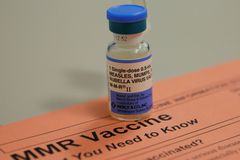