Refusal or reluctance to vaccinate poses a growing threat and the Ontario government should consider eliminating non-medical exemptions to the province’s school vaccination requirements to improve coverage rates, Toronto Public Health says in a new report.

Vinita Dubey, associate medical officer of health with Toronto Public Health, said non-medical exemptions have been creeping up in recent years and this poses a risk.

“At what point is the exemption rate too high?" Dr. Dubey said Monday. “We should think about removing it before we get a big outbreak.”

“We are confident that the current system, which requires that children have proof of immunization against certain diseases to attend school unless there is a valid medical exemption or affidavit of conscience or religious belief, strikes the right balance between mandating immunization for the vast majority of children and respecting parental rights and religious freedoms,” he wrote.

The proposal to look at ending non-medical exemptions is one of a series of recommendations contained in a report Toronto Public Health prepared for the city’s board of health. The report also recommends Health Canada consider creating a national compensation program to help those affected by serious vaccine side effects, which are very rare. Many jurisdictions, including Quebec, have compensation programs that providing funding to people who are affected by rare, serious vaccine side effects. Eileen de Villa, Toronto’s medical officer of health, said a compensation program can help ensure high levels of public trust in the safety of vaccines.

"I think recognizing that such a mechanism exists or such a forum exists actually helps build confidence in the system,” Dr. de Villa said.

Joan Robinson, a pediatric infectious-diseases physician based in Edmonton, questioned the usefulness of such a program and said it could make it appear as though serious side effects from vaccines are more common than they are.

The report also says improvements should be made to digital health records to ensure an individual’s vaccination status is updated when vaccines are administered and to allow health officials to study the records to determine areas where there may be low coverage rates. Toronto Public Health recommends that advertising standards be updated in Canada to prohibit misinformation about vaccines from being promoted and they also suggest social-media companies adopt policies to help limit non-evidence-based information about vaccines.

Religious, philosophical and other non-medical exemptions are increasingly being targeted by health officials who say they are not necessary and put other students at risk. New Brunswick is considering putting an end to non-medical exemptions, following an outbreak of measles in the province earlier this year.

Ontario and British Columbia are the only other provinces that have vaccination requirements for students. In Ontario, students are required to have vaccinations in order to attend school, but parents can obtain non-medical exemptions if they object. Parents must attend an educational session before they can obtain a non-medical exemption. B.C. introduced a new requirement this year for parents to report their child’s vaccination status. Parents who choose not to vaccinate their children will have to speak to public health officials.

The differing approaches highlight the complicated, sensitive nature of discussions around vaccines. Dr. Robinson said ending non-medical exemptions could risk alienating parents and could lead to some choosing to remove their children from the public-school system, she said.

“Making people do something they don’t want to do can really backfire,” Dr. Robinson said.

But there is evidence ending non-medical exemptions can lead to higher vaccine coverage rates. In California, where non-medical exemptions were eliminated in 2015, the number of students without up-to-date vaccinations dropped after the new law was passed. A study published in the Journal of the American Medical Association earlier this year found the number of kindergarten students without up-to-date vaccinations in that state decreased, from about 10 per cent in 2013 to about five per cent in 2017. But in the years since, the number of students receiving medical exemptions started to creep up. In light of this, the state passed two new laws earlier this month designed to crack down on the use of exemptions and ensure they are only going to students with legitimate medical reasons for not being able to be vaccinated.

The Toronto Public Health report will be discussed at the city’s board of health meeting next Monday. 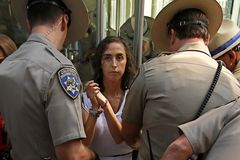 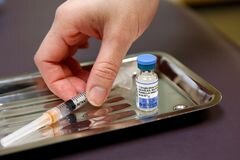 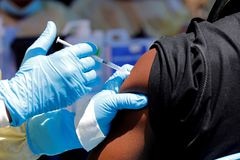