The field of brain-machine interfaces has taken off in recent years, with Silicon Valley leaders joining the fray. Companies such as Facebook and Elon Musk’s Neuralink envision we will one day be able to use this type of technology to control our laptops and smartphones with our thoughts.

In Toronto, Cesar Marquez-Chin has a very different idea for the use of brain-machine interfaces, which use brain signals to communicate with electronic devices. He is among a small number of international researchers using a relatively low-tech form of this technology to help train people paralyzed by stroke or spinal-cord injury to move again.

Functional electrical stimulation (FES) delivers electric impulses to specific muscles, causing them to contract. For individuals who have experienced stroke or spinal-cord injury, therapists apply FES to the paralyzed body part, with the aim of retraining movement over many sessions. But for reasons that are not yet entirely understood, the technique does not work for everyone.

Dr. Marquez-Chin says he believes this is where the brain-machine interface comes in. With a single electrode placed on the skull, the patient’s own brain signals control when the electrical impulse is delivered to the paralyzed body part. This then bridges the patient’s intention to move with the action of moving, he said.

So far he has completed tests of the approach on two research participants, a tiny sample among the roughly 86,000 Canadians living with a spinal-cord injury and around 400,000 others living with long-term disability from stroke. But both participants, who had severe chronic hemiplegia, or paralysis on one side of their body after a stroke six years prior, regained much of the voluntary movement in their hands and arms after 40 and 80 sessions respectively. Neither had improved with earlier attempts using FES therapy alone.

His results mirror those of researchers elsewhere. A small number of studies using similar brain activity-controlled FES by researchers in other parts of the world, including in Switzerland, Japan and the U.S., have also shown participants have regained movement after repeated training.

Milos Popovic, KITE director and collaborator of Dr. Marquez-Chin, calls it an “exciting” approach, and while their research is in its infancy, his team’s initial results suggest they are on the right track. “Patients are doing absolutely outstanding,” he said.

The Toronto researchers published a case study of their first participant in the journal Case Reports in Neurological Medicine in 2016. They published their second case study in the American Journal of Physical Medicine and Rehabilitation in early 2019.

Dr. Marquez-Chin is now conducting a follow-up study, testing the approach on eight individuals with tetraplegia, or paralysis from the neck down, due to spinal-cord injury. In a presentation at the University Health Network’s CRANIA Conference in September, he showed videos of two participants, whose identities are protected, initially unable to make a fist or lift their arm. After 27 sessions, one participant, who had a spinal-cord injury two years prior, was shown lifting a bottle of water to his lips. The other, who had a stroke six years earlier, was able to put on his hat.

Brain-machine interfaces are not without controversy. Some, such as Suzanne Rivera, an associate professor of bioethics at Case Western Reserve University in Cleveland, caution there are numerous ethical considerations for testing this type of technology, including questions about the physical risks involved, as well as risks to participants’ dignity and privacy that might arise, for example, if a device is hacked.

Moreover, she said in an e-mail, “If participants benefit from the experimental device, what are the plans to make it available to them once the trial is over?”

Compared with the brain-machine interfaces proposed by the likes Facebook and Neuralink, those used by Dr. Marquez-Chin and his peers are less sophisticated, and patients are hooked up to the technology for only as long as their rehabilitation sessions. Even so, the researchers still have a lot more work to do before the use of brain-machine interfaces with FES is widely adopted. For example, they have yet to figure out the ideal duration and number of sessions, whether there are side effects, which patients might benefit most and how the intervention compares with current therapies.

“This isn’t something that can go out and be widespread today or tomorrow,” said Patrice Lindsay, Heart & Stroke’s director of systems change and stroke program. “It’s great if we can go there with it, [but] I think there’s a lot we still have to learn about how it works [and] which patients are the right patients.”

Nevertheless, the early results reflect a shift in thinking about rehabilitation for those with chronic paralysis. Previously, it was widely believed recovery was impossible once the initial period after a stroke or spinal-cord injury had passed, Dr. Marquez-Chin said. Now, it appears it’s not too late, even years later, to see improvements. Feeling overwhelmed by a plugged-in lifestyle? Digital minimalism may be the answer
December 7, 2019 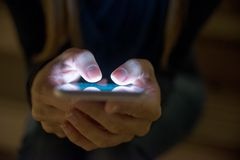