The City of Toronto says the large police operations mounted this summer to clear dozens of homeless people from three downtown parks cost more than $840,000 in staffing alone, for a total bill of $2-million including the costs of landscape restoration and fencing.

The clearing of the encampments in July – which sparked clashes with protestors and homeless people – involved scores of police, hundreds of metres of metal fencing and dozens of private security guards.

In a news release on Friday afternoon, city officials said three operations to enforce trespass notices cost a total of $840,127 in staffing for city workers, police and private security guards: $416,699 for Trinity Bellwoods, $200,049 for Alexandra Park and $223,388 for the lawn outside Lamport Stadium.

The city also said it had spent another $792,668 on “landscape restoration” for all three parks, including removing sand, applying seed and fertilizer, and inspecting and removing trees. An additional $357,000 was spent on fencing that remained up for weeks after the encampments were cleared, the city said, to allow turf to recover. The city also said it removed more than 80 tonnes of debris and contaminated grass, soil and sand from the three parks.

Activists and some on city council’s left have decried what they said was a heavy-handed approach, arguing that the homeless should be offered permanent housing, rather than shelter spots where some say fear catching COVID-19 or facing violence.

City Councillor Josh Matlow, a critic of Mayor John Tory’s who has spoken out against the raids, was among those saying the cash could have been spent more wisely on housing people. He said many of the people moved out of the three parks simply pitched tents elsewhere.

Toronto’s parks are no place to house the homeless

Just the $840,000 in staffing costs for the city’s removals could have paid for a year’s rent for 58 bachelor apartments at the average price in the city, Mr. Matlow said, which is just over $1,200 a month, according to the Canada Mortgage and Housing Corp. figures. That’s not far off the 60-odd people displaced by the raids, he said.

“The same price for the security and the policing and staffing could have actually provided stable housing to virtually everyone in the encampments,” Mr. Matlow said.

Mr. Tory and city officials have defended the raids, saying they came after months of efforts by outreach workers to convince homeless people to move indoors and that the encampments posed fire risks. The city says 1,898 people living in encampments have been “referred to inside safe spaces” during the pandemic.

The city’s statement on Friday said the actions came after “several months of engagement with encampment occupants” but also “followed months of threats and intimidation from protesters directed at city staff working to help homeless residents find safe, indoor shelter.”

The city’s tally of the costs came just a day after advocates for the homeless staged a protest outside Mr. Tory’s downtown condo building. Activists and homeless people criticized what they said was police brutality in the raids and vowed to fight many of the charges laid against them, including trespassing charges, in court.

Police, who say they arrested three people at the Thursday event, issued a press release the same day asking the public to help them identify eight more people wanted for alleged criminal offences – including weapons and assault charges – allegedly committed during the clearing of the Lamport Stadium encampment on July 21, when police and protesters clashed.

Doug Johnson Hatlem, a street pastor with the downtown Christian charity Sanctuary, said the city does not have enough shelter space, meaning many homeless people are forced to sleep on the streets or in parks. He defended staging a protest outside the mayor’s residence.

“If you want to be left alone by people like us, then stop ejecting people from tents all over the city,” Mr. Johnson Hatlem said. 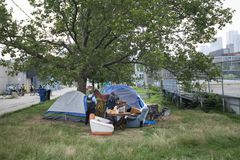 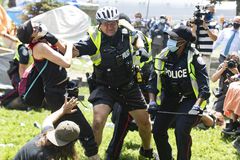 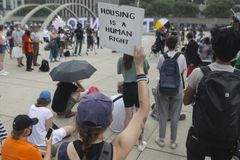