On the evening of May 5, Nelly Wendo called police in London, Ont., to ask for help. Her son, 27-year-old Caleb Tubila Njoko, was “acting crazy" and needed a “mental-health doctor,” she said.

The police operator asked if her son was kicking, punching or acting violently toward her.

“No,” she said, according to a report released in September by the Special Investigations Unit (SIU), Ontario’s police watchdog.. She was scared, but only because he was speaking gibberish and refusing to sleep. She reiterated that she needed mental-health responders.

As police forces across the country face intense scrutiny over a series of deaths that have focused attention on issues of race and mental illness, cities are grasping for ways to prevent tragic interactions with police. In a growing number of U.S. jurisdictions, a 911 operator can offer exactly what Ms. Wendo requested that night: A team of civilian mental-health workers trained to handle the most urgent psychological crises. But like nearly every municipality in Canada, London doesn’t employ such a unit.

Instead, on that May night, the force dispatched six officers and a battering ram.

Mr. Njoko was dead within 50 minutes of their arrival, having fallen while trying to climb down from the apartment’s 15th-floor balcony.

The officers were not at fault, the SIU report determined. They used progressive de-escalation techniques, had a trained crisis negotiator speak with Mr. Njoko and backed away from his apartment door when it became clear their presence was upsetting. The report states Mr. Njoko was clearly “fearful of police.”

Across the country, these kinds of mental-health calls to police are surging. Although a national statistical picture is obscured by varied record-keeping methods in different regions, several police forces have reported a doubling of mental-health calls over the past decade. Canada’s largest municipal force, the Toronto Police Service, deals with about 30,000 a year.

This year, several of those encounters have ended in tragedy. In May, Regis Korchinski-Paquet fell from a high-rise balcony in the presence of Toronto police officers during a mental-health breakdown. Also in spring, Greater Toronto Area police shot and killed two racialized men with mental illness, D’Andre Campbell and Ejaz Choudry. In New Brunswick, the same fate befell two Indigenous people with mental-health challenges, Chantel Moore and Rodney Levi, over an eight-day period in June.

And last Month, the Independent Investigations Office of B.C. released an investigation into the 2019 RCMP shooting death of Kyaw Din, a 54-year-old schizophrenic man whose family, like Mr. Njoko’s, had called 911 in search of mental-health assistance.

“There’s an understanding that what we’re doing now doesn’t work," said David Gratzer, a psychiatrist at the Centre for Addiction and Mental Health (CAMH) in Toronto. “We have reservations about a mental-health crisis being responded to by a person in a uniform with a gun.”

In June, CAMH issued a surprise statement declaring that police should no longer be the first responders “when people are in crisis in the community.”

The statement did not, however, suggest who should take their place.

Many Canadian cities have sought to improve police interactions with mentally ill people by creating hybrid teams of officers and mental-health workers to respond to urgent crises. Vancouver has operated a model along these lines, Car 87, since the late seventies. On the day the SIU released its report into Mr. Njoko’s death, London Police introduced just such a unit, called the Crisis Outreach and Support Team, which will team up four plain-clothes officers with mental-health workers to handle some of the force’s 3,600 annual mental-health calls.

These models require a police officer – either uniformed or plain-clothed depending on the city – to show up for mental-health issues.

"With the co-respondent model, you are expanding the role of the criminal justice system in the lives of people with mental illness,” he said. “People that have severe and persistent mental illness don’t necessarily have great history with law enforcement. If they find out that it is a law enforcement officer they’re talking to, it can raise their level of anxiety and make it more difficult to work with that individual.”

American cities – including Denver, Albuquerque, N.M., San Francisco and Austin – are embracing a new, civilian-led model of crisis response, spurred by the movement to defund police and divert funding to community agencies that erupted in the wake of George Floyd’s death.

Under the civilian model, the mobile crisis teams might consist of a clinician and a social worker. “No law enforcement,” Mr. Bruno said.

Those civilian teams are complemented by teams of officers trained in crisis response who can be called upon when needed. But that should be rare. In Eugene, Ore. where these civilian-led teams have been in place since 1989, staff needed police backup on just 150 of 23,000 calls last year.

Uptake in Canada has been slow. So far, the model is undergoing serious study in Toronto and Victoria, where Chief Constable Del Manak is spearheading the idea. In July, the police board endorsed his plan for a 90-day task force to examine how to establish a civilian-led crisis intervention team that would respond to low-risk mental-health calls.

Though he’s a relentless backer of the idea, Mr. Manak cautions that no jurisdiction should expect to remove law enforcement from mental-health calls entirely.

“Many mental-health calls start as something benign and uneventful before escalating into something violent,” he said.

He estimates that roughly 5 per cent of calls to Victoria police could be diverted to a civilian team, but a more accurate number awaits a thorough analysis of 911 calls.

Some critics insist mental-health workers can take on more risk than police give them credit for. “I worked in the community for many years in the forensic program with people who were charged with very severe crimes and I never needed a gun,” said Idil Abdillahi, assistant professor at the Ryerson School of Social Work. “I never had any of these kinds of things. I had skills and training.”

Earlier this year, Toronto mental-health advocates Rachel Bromberg and Asante Haughton earned a $20,000 grant from the city to consult with Torontonians about what a mental-health crisis response team without police should look like.

Ms. Bromberg says many U.S. cities have estimated that they can divert up to 20 per cent of their police call volume to these teams – saving millions of dollars.

“Police have an extremely important job in society to fight crime,” said Ms. Bromberg. “Mental-health crises are not a crime. Some officers are very good at this work. But when they respond – even if they’re great people – there is still this implication that mental-health crisis is criminal.”

‘It is urgent:’ Commissioner renews calls for Indigenous bodies to oversee police
September 7, 2020 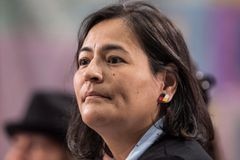 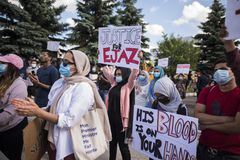 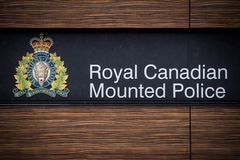