In 1896, Swedish chemist Svante Arrhenius made a prescient calculation that showed the vast quantities of carbon dioxide released into the atmosphere by burning coal and other fossil fuels would eventually cause the planet to get warmer.

Little did he realize that the effect he described was already under way and being dutifully recorded by a ready-made monitoring system distributed around the globe in the form of trees.

Now, scientists have tapped into that record and demonstrated that the human effect on Earth’s climate can be traced back to the turn of the last century, when it began leaving its indelible mark on the growth patterns of tree rings. What the tree rings reveal matches what climate models predict should have happened given the basic properties of greenhouse gases and the amount of energy the sun supplies to the atmosphere.

“The models are saying that we should see the fingerprint of human-forced climate change in the early 20th century, and the tree rings confirm that,” said Kate Marvel, a climate scientist with NASA’s Goddard Institute for Space Studies in New York, and lead author on the analysis, published Wednesday in the journal Nature.

The result is significant for two reasons, Dr. Marvel and her colleagues say. First, because it provides an alternative way to gauge how greenhouse gases and other industrial pollutants have influenced drought patterns over time. And second, because it raises confidence levels in what models are projecting for the future as climate change becomes more pronounced, including extremes of temperature and precipitation that translate into more severe droughts and floods than would otherwise have occurred.

And while the basic fact of climate change is not in doubt among experts, the study offers additional evidence that these effects are primarily the result of human activity.

How much room does nature need? On Earth Day, a new report points to gaps in Canada’s wilderness safety net

This is what a black hole looks like: Researchers photograph an abyss larger than our solar system 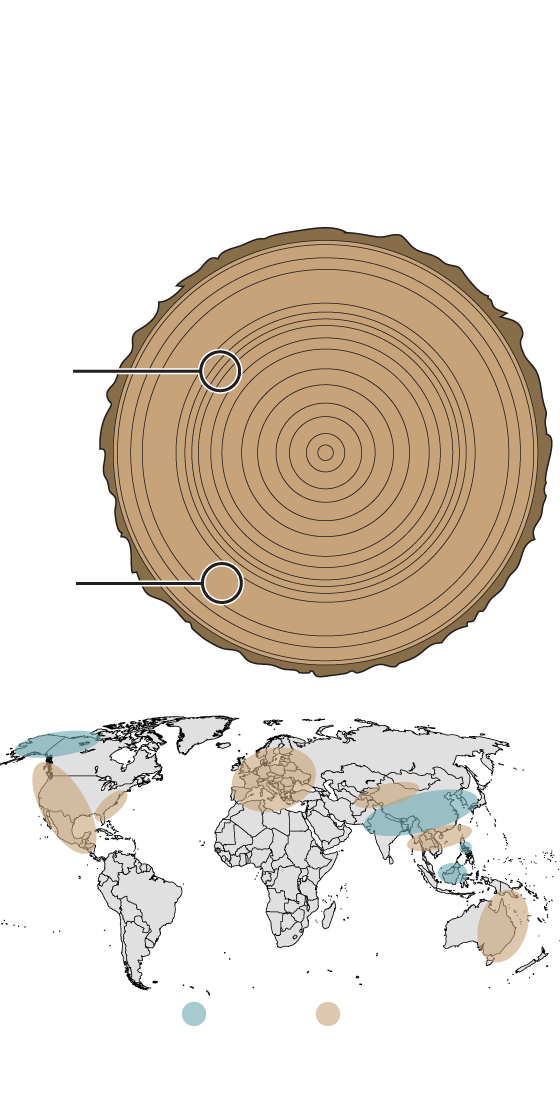 Growth patterns in tree rings record changes in soil moisture over time. A new analysis reveals that moisture levels in many parts of the world have shifted since 1900, due to human influence on global climate. 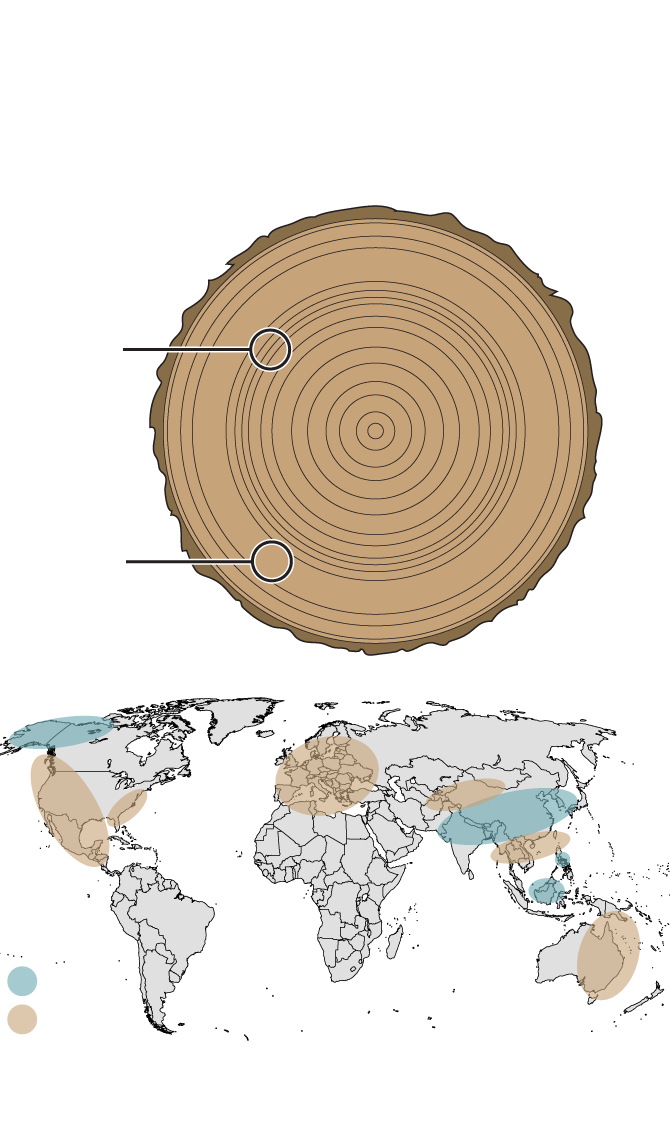 moisture over time. A new analysis reveals that moisture levels in many parts of the world have shifted since 1900, due to human influence on global climate. 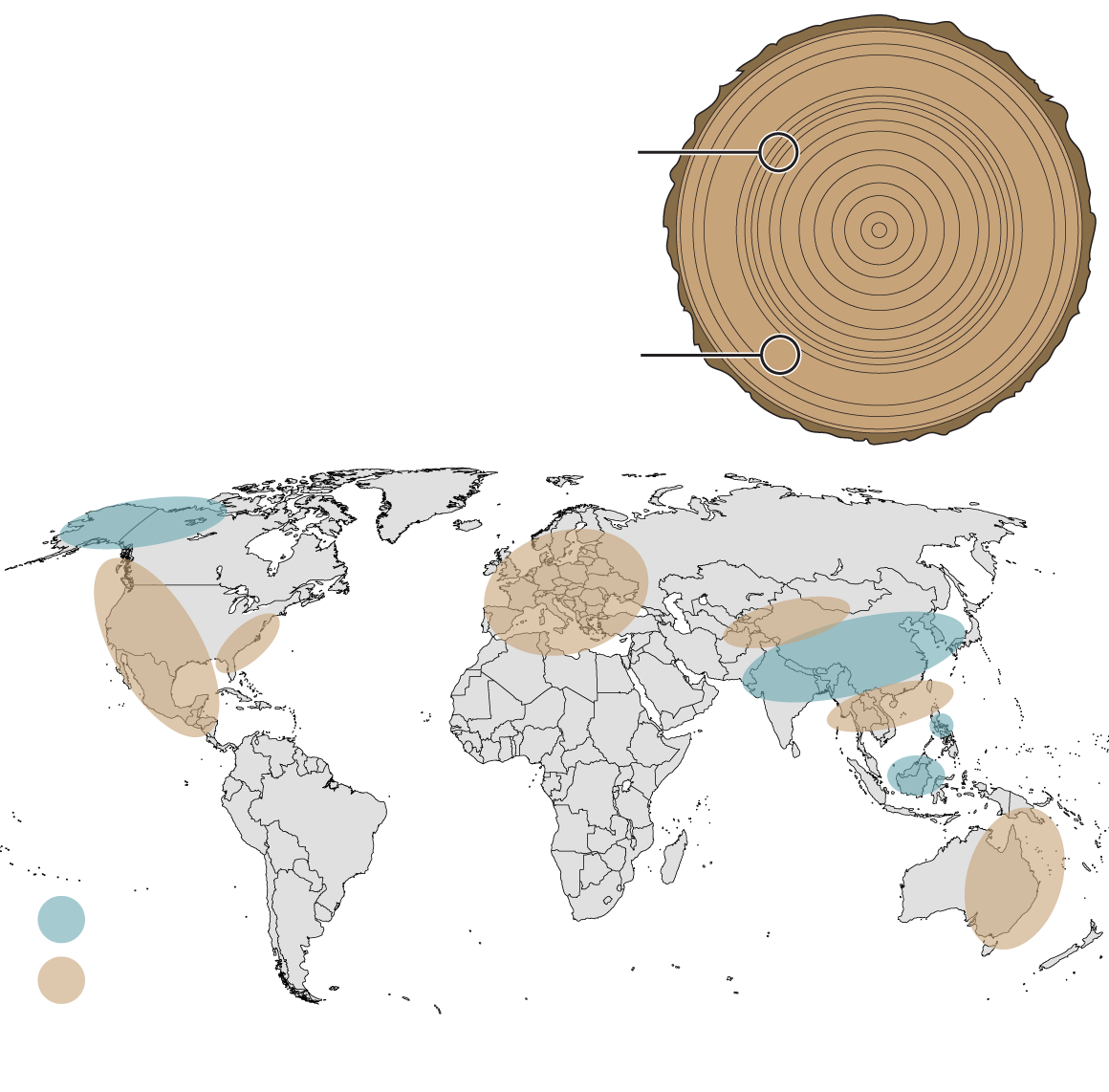 Growth patterns in tree rings record changes in soil moisture over time. A new analysis reveals that moisture levels in many parts of the world have shifted since 1900, due to human influence

“You can put in any natural factor that you want and you will get nothing that looks anything like the recent warming,” said Benjamin Cook, also with NASA, a co-author on the new analysis who specializes in using tree rings to study drought.

Tree rings are among the most direct ways of measuring past climate because trees are sensitive to soil moisture. In drier years, trees grow more slowly and the annual rings that are recorded in their trunks become narrower. By comparing overlapping tree-ring patterns in wood that grew at different times on different continents, scientists have gradually built up “drought atlases” that show changes in moisture distribution dating back to the year 1400 or, in some areas, even earlier.

While drought atlases have previously been used to study regional moisture patterns or specific historical episodes of drought, Dr. Marvel and her colleagues probed the data, based on many thousands of tree-ring measurements, in search of global trends that looked out of the ordinary.

“In order to attribute something to climate change, you have to know if it’s weird or not,” she said.

The scientists found that after centuries of normal variations during which some places alternately became wetter or drier relative to each other, an additional effect on moisture emerged around 1900 that is consistent with climate change. Over all, the data show that much of North America, Australia and the Mediterranean have been getting drier over the past 120 years while parts of Asia, including India and western China, have been getting wetter.

The effect was especially pronounced during the first half of the 20th century, but became more subdued between 1950 and 1975. Since then, it has accelerated. The scientists posit that a huge increase in the release of sulphates and other airborne chemicals in the postwar era served to temporarily counteract the effect of greenhouse gases by deflecting sunlight and promoting cloud formation. This countertrend later subsided after air-quality regulations went into effect in North America and Europe.

John Pomeroy, a University of Saskatchewan hydrologist who directs Canada’s largest research program on water risk and climate change, said the NASA study does a good job of incorporating other climate records together with the tree-ring data and matches the occurrences of drought that were experienced in Western Canada around the time of the First World War and again in the 1930s.

“There weren’t really severe droughts again until the 1980s,” he said.

At a meeting on water security held last month in Ottawa, Dr. Pomeroy stressed the need for Canadians to be prepared for increasing flood and drought conditions, and for governments to accelerate efforts to better forecast changing risk levels.

Not all parts of the world were included in the NASA study. Tree-ring data is still lacking in much of the southern hemisphere, and there are tropical regions where tree rings are not present because growth seasons are less distinct.

In the Far North, the study suggests ways that climate change will accelerate permafrost loss by increasing rainfall in some areas and causing more widespread fires in others. The disappearance of permafrost – permanently frozen soil – in many parts of the Canadian Arctic poses an additional problem for managing climate change because it releases methane, a greenhouse gas, into the atmosphere

In a separate comment piece in Nature, also published on Wednesday, Guelph University ecosystem scientist Merritt Turetsky and colleagues wrote that permafrost loss is a “sleeping giant” with important consequences for global warming.

opinion
Climate change is a major factor in flooding – but it’s not the only one
April 29, 2019
opinion
Extinction Rebellion shut down parts of London – and brought much-needed attention to climate change
April 28, 2019