As Newfoundlanders dig out from a massive blizzard that buried the island’s eastern peninsula, concerns were growing about elderly residents still trapped inside their homes as food supplies were getting low.

A state of emergency continued into a fourth day in St. John’s on Monday, with most stores in the city remaining closed and growing frustration among thousands of residents still housebound by the record snowfall, unable to reach the few stores that were open, or, in some cases, without running water.

Hundreds of soldiers armed with snow blowers and shovels were deployed throughout the Avalon Peninsula, helping residents who had been stuck inside for days, while delivering formula to young families with infants. Some people took to social media, pleading for help to remove snow blocking their exits.

The blizzard, which piled snowdrifts more than two metres high in parts of St. John’s, left many Newfoundlanders facing a wall of snow when they opened their front doors. A few resorted to filling their bathtubs with snow just so they could start to dig their way out.

The City of St. John’s extended its state-of-emergency order – used for the first time in more than 35 years – while allowing only a limited number of pharmacies to open Monday afternoon, and asking gas stations to be used for emergency refuelling only. Some convenience stores flouted orders and remained closed, as Newfoundlanders lined up to stockpile supplies after being stuck inside since Friday. 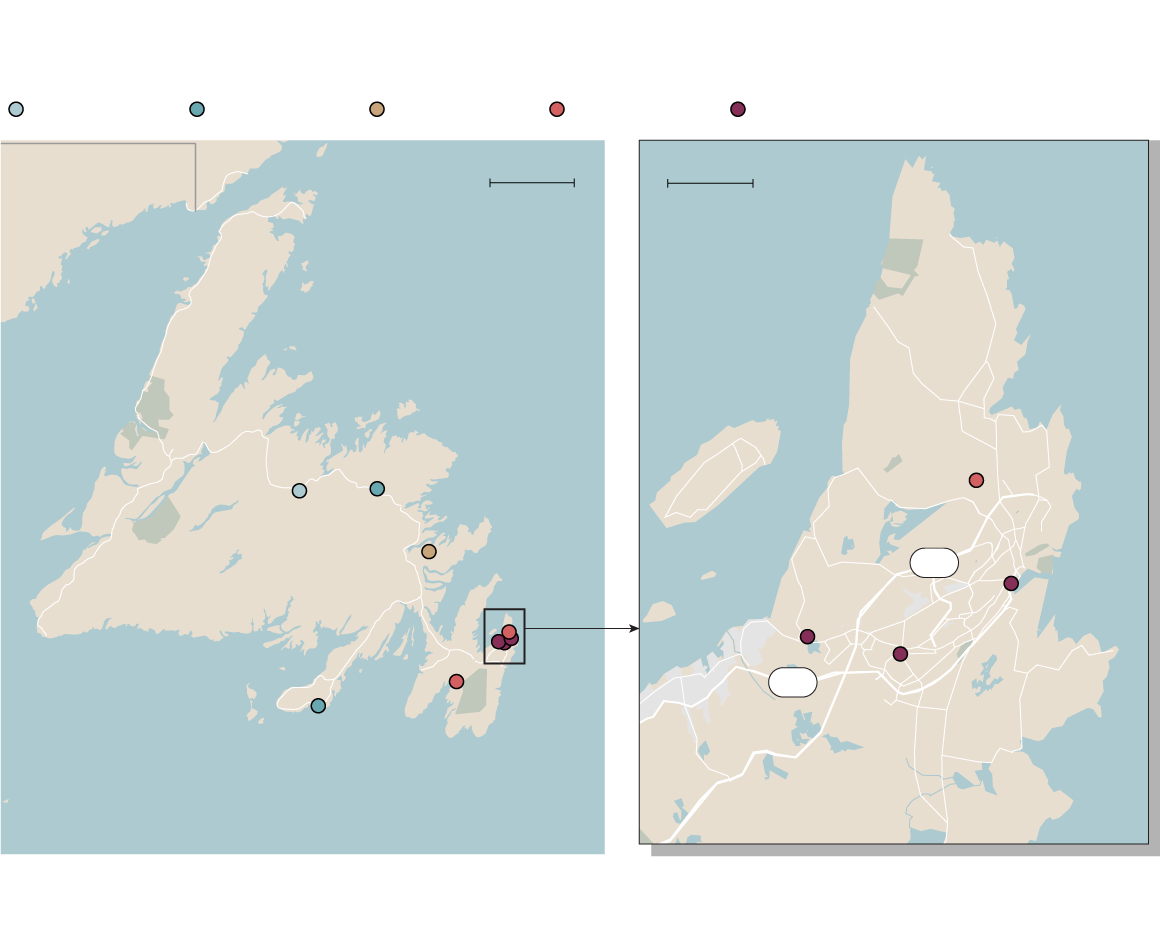 Many residents have tried to make the best of the situation, with street parties breaking out as schools and businesses remained closed, while others went skiing and snowboarding on streets in downtown St. John’s. But there was also some growing frustration as the cleanup drags on longer than expected.

“Some people are keeping a sense of humour about it, but there’s also some people in a bit of panic because they don’t have enough supplies or they have an elderly parent who can’t get out,” said Olivia Snow, a Memorial University student who lives in the city’s east end. “I think we all expected this would be over on Saturday. I know people are getting more and more frustrated.”

Environment Canada reported the 76.2 centimetres that fell in Friday’s storm was the heaviest snowfall in a 24-hour period since the current weather station was set up at St. John’s International Airport in 1942.

“It was pretty terrifying,” Ms. Snow said. “It was overwhelming, just watching the snow piling up against the door. It just kept coming. Going outside to shovel was almost like being in the centre of a tornado.”

Food stores will be allowed to reopen Tuesday, but restaurants, fast-food chains and other outlets will remain closed, the city said. Police warned residents it could be the end of the week before the cleanup from the storm is finished. Many homes remained affected by frozen pipes, power outages and, in St. John’s Battery neighbourhood, an avalanche that forced residents’ evacuation.

The tricky business of snow removal continued around the clock, as crews dumped truck load after truck load into the St. John’s harbour, with no other place to put it. The problem is most pronounced in St. John’s old core, where streets are narrow and many vehicles remain buried under snow.

With many roads yet to be cleared, some officers from the Royal Newfoundland Constabulary, and other emergency staff such as doctors and nurses, had to snowshoe to work. Snowplows were used to lead ambulances on medical calls. In the height of the storm, a pregnant woman took a snowmobile to hospital and gave birth to a healthy baby boy named Levi Jacob Snow. On Sunday, her neighbours dug through 2.5-metre snow drifts so she could bring the baby home.

Police asked pedestrians and all vehicles to stay off the streets, many of which had only one lane cut through the wall of snow that was taller than the front-end loaders trying to clear a path. Other neighbourhoods were still waiting for their first plows.

St. John’s Mayor Danny Breen asked the public for patience and said the city was working to get grocery stores and more drugstores reopened as soon as possible so people could buy food and medicine.

“The problem is our streets can’t handle that amount of traffic right now,” Mr. Breen said.

Despite orders to remain indoors, police said they weren’t ticketing people who ventured outside to find food or other supplies. They asked for people’s co-operation to get streets cleared.

“This is unprecedented. This is unlike anything I’ve ever seen,” said Constable James Cadigan, a spokesperson for the Royal Newfoundland Constabulary. “We understand the level of desperation and the challenges that are being felt in the community.”

The storm also brought tragedy. Two elderly men died in Harbour Grace, Nfld., in the wake of Friday’s blizzard, reportedly after trying to shovel out their homes. The search also continues for a 26-year-old man who went missing during the storm from a village in Conception Bay North.

Police said they would continue to deliver supplies to people who were unable to leave their homes. Constable Cadigan, meanwhile, praised Newfoundlanders for their response to the historic blizzard, for helping with snow removal and assisting neighbours however they can.

“I’ve been struck by the solidarity we’ve seen. This community really came together in the conditions we were handed,” he said. “We’ve seen a strong response from the communities that have been most impacted by this. People are really taking care of each other.”