Federated Co-operatives Ltd. says it is using “alternative channels” to make sure priority customers get the fuel they need as a labour dispute at its Regina refinery drags on.

Executive vice-president Vic Huard said Thursday that the refinery has been operating normally with replacement workers, but Unifor blockades there and at other Western Canadian operations are making it tough to move supply around.

“It’s not a fuel shortage. It’s a fuel blockage. We have the fuel,” Mr. Huard said. “Unifor won’t let us distribute it – that’s the issue.”

He declined to specify the alternate means by which the company is supplying priority customers because he doesn’t want Unifor to block those, too.

Police, ambulance and fire fleets are the top priority, followed by home heating customers and communities where Federated Co-op is the only retail fuel supplier.

Mr. Huard said stations are seeing supply shortages across Western Canada, including in Calgary and Winnipeg. Cardlock systems for commercial truckers are allocating 300 litres of diesel and 100 litres of gasoline a day.

Earlier in the day, dozens of truckers with horns blaring drove their semis into downtown Regina to protest the blockades.

About 90 independent lease operators who transport fuel for the refinery demanded Unifor remove its barricades.

“It’s been a very frustrating, stressful situation for the business owners and for our drivers,” spokeswoman Heather Day said. “It’s really concerning that they’re basically holding the Prairie provinces, especially, but all of Western Canada hostage by choking off the fuel supply.”

Also Thursday, the Alberta Court of Queen’s Bench in Calgary granted Federated Co-op’s request for an injunction against a blockade at a distribution terminal in Carseland, Alta., southeast of Calgary.

Unifor was ordered not to impede traffic, obstruct or harass customers, tresspass, picket or congregate within five metres of any access, watch employees or contractors or intimidate.

Mr. Huard said as of Thursday afternoon the Carseland blockade was still up and that the company intends to go back to court for an enforcement order.

Independent truckers went into the Regina refinery complex overnight to fill up and seven got locked inside when Unifor re-established its barricade in the morning, Mr. Huard said. Regina police said the situation was resolved peacefully and the truckers were eventually able to leave.

More than 700 refinery workers were locked out on Dec. 5 after the union issued strike notice.

Negotiations between the company and the union had resumed last week, but broke down Friday and Unifor re-erected its barricades.

Unifor said the company isn’t bargaining in good faith and rejected a recent proposal that included $20-million in pension savings for the company. Pensions are one of the key issues in the dispute.

Saskatchewan Premier Scott Moe has said he’s prepared to appoint a special mediator and that a negotiated settlement is the best option to end the lock out.

Unifor Local 594 dismissed that idea in an open letter posted to Twitter on Thursday. It accused the company of moving the goalposts during negotiations.

“It has become clear that the only way to bring an end to this lockout is binding arbitration,” the union said.

“A significant source of Western Canada’s fuel supply now relies on [Moe] to get both parties to the table through an arbitration process to finally end this dispute. The community and the economy are waiting.” 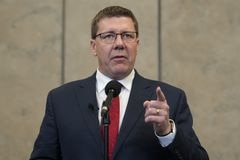 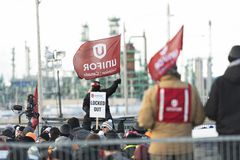 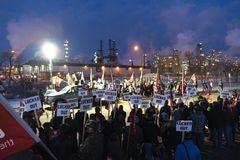