Long-haul truckers are playing an important role in bringing supplies into Canada, but some people are concerned not enough is being done to ensure they aren’t transporting COVID-19 with them.

“They get the four-question screening … There’s no actual physical scan. There’s not a temperature scan,” said Jim Willett, mayor of Coutts, Alta.

His village sits next to one of the busiest United States border crossings in Western Canada, and Mr. Willett said he sees semi-trailers going back and forth all day.

While he has a lot of respect for the drivers, Mr. Willett said he fears they may not be reporting symptoms or may not be aware they have the virus, especially if they are coming from hard-hit areas in the U.S.

“My problem is with the screening that goes on with those truckers, they are basically on an honour system. Even though 95 per cent of them are honourable, there’s always those that aren’t,” the mayor said. “So, I am worried that that is going to be a continual source of infection.”

There have been over a half-million confirmed cases of COVID-19 in the U.S. and more than 20,000 deaths. Canada has over 23,000 reported cases and more than 650 fatalities.

The border between the two countries closed to most travellers last month, the first such closure since Confederation in 1867. It is still open to people and businesses providing essential services.

When crossing the border, drivers are asked the purpose of their travel and if they are feeling unwell. Ms. Purdy said border agents are also trained to observe any signs of illness. If it’s deemed drivers can pass, they are given a public health handout with information about the virus.

Truckers, and others who are exempt from the border closure and the mandatory 14-day isolation period for returning travellers, are still required to continually self-monitor for symptoms and practise proper self-isolation measures.

The Public Health Agency of Canada is responsible for bringing in measures like thermal screening, Ms. Purdy said. During the SARS outbreak in 2003, Ms. Purdy said those checks were done at airports but weren’t effective in stopping the infectious disease from crossing borders.

She could not say if or how many long-haul trucks have not been allowed into Canada due to COVID-19.

“The border has gone through a major transformation unlike anything we have seen before,” said Stephen Laskowski, president of the Canadian Trucking Alliance.

It took monumental planning and co-operation between governments in both countries and the trucking industry, he added in an interview from Toronto.

As people see the world slow down around them, it is necessary to have long-haul truckers still out on the road delivering essential supplies, Mr. Laskowski said. Precautions are being taken to ensure drivers and inspectors are safe.

Everyone is practising social distancing, hand sanitizer and washing is being promoted and more inspector booths have been opened. Most locations have gone to a cashless system as well, Mr. Laskowski said. Documents on best practices may also be given to drivers and inspectors.

Washing hands and grabbing a meal – things that seemed easy a few months ago – have been challenging for drivers, said Mr. Laskowski. But there has been a lot of encouragement from the public.

When drivers aren’t on the clock, they are following the same rules as everyone else, said Mr. Laskowsi.

“These are very challenging times for everyone, not just the trucking industry.” 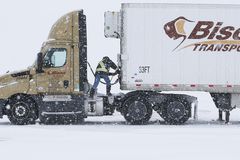 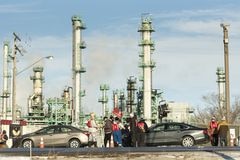 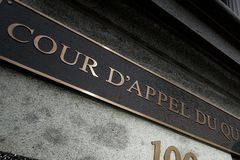