Prime Minister Justin Trudeau isn’t saying what he is willing to do to keep a provision protecting labour rights for lesbian, gay, bisexual and queer workers inside a renewed North American free trade pact.

More than 40 Republican lawmakers wrote U.S. President Donald Trump on Friday demanding the removal of language in the agreement pledging all three countries to support “policies that protect workers against employment discrimination on the basis of sex, including with regard to pregnancy, sexual harassment, sexual orientation, gender identity.”

The legislators urged Mr. Trump not to sign the agreement unless the language was removed.

The three countries are expected to sign the deal, known as the United States-Mexico-Canada Agreement (USMCA) at the G20 meeting in Argentina at the end of the month.

Mr. Trudeau says the deal Canada negotiated has some of the strongest labour and environmental provisions of any trade deal the country has signed.

He also says he is not going to negotiate in public when asked how far he would go to keep the provision in the agreement.

“We got to a good agreement that I think represents Canadian values, Canadian approach, but also values that are broadly shared amongst citizens of our three countries,” Mr. Trudeau said on Sunday at the end of a summit of Asia-Pacific leaders.

“In any trade deal, there are going to be people who would like this or like that or not want this or not want that,” he said, adding that moving forward with a strong agreement is in the interest of all three countries.

In a letter to the White House flagged on Friday by the U.S. website Politico, the coalition of 40 members of Congress said the United States “has the right to decide when, whether and how to tackle issues of civil rights, protected classes and workplace rights” as a sovereign nation.

“A trade agreement is no place for the adoption of social policy. It is especially inappropriate and insulting to our sovereignty to needlessly submit to social policies which the United States Congress has so far explicitly refused to accept,” reads the letter, released on Friday.

Signatories to the letter include Iowa Republican Steve King, who made headlines in Canada last month when he tweeted his support for the controversial Toronto mayoral campaign of alt-right anti-immigration champion Faith Goldy.

Another signatory, Republican Doug Lamborn, has expressed concern that congressional approval for USMCA could set a precedent “for activist courts”, and said in a statement on Friday that Mr. Trump needed to remove the “troubling language ... adopted behind the scenes.”

The deal must make its way through Congress, and the letter sent on Friday to Mr. Trump suggests he could lose some Republican support for the agreement unless changes are made.

Mr. Trudeau said on Sunday that every country will go through its own ratification process.

“Canada will, the United States will,” he said. “But we’re going to let the American officials and administration focus on their ratification process while we focus on ours.”

Mr. Trudeau was attending a major economic summit meeting with two key trading allies across the Pacific in the shadow of an ongoing trade war between the world’s two biggest economies.

Mr. Trudeau is meeting with Japanese Prime Minister Shinzo Abe and Australian Prime Minister Scott Morrison where talk will focus on the future of a trade deal among 11 Pacific Rim countries, including Canada.

The deal, known as the Comprehensive and Progressive Agreement for Trans-Pacific Partnership (CPTPP), has been a repeated topic of conversation for Mr. Trudeau during his time in the capital of this island nation.

The agreement came up during Mr. Trudeau’s meeting with Malaysian Prime Minister Mahathir bin Mohamad, and again on Sunday in meetings with Mr. Abe and Mr. Morrison.

Speaking through a translator, Mr. Abe said he is ready to work with Mr. Trudeau “to expand this trade area which will have the free and fair rules” and forge a closer relationship “to address various global challenges.”

Canada became one of the first six signatories to ratify the CPTPP, bringing it into force in December.

Observers say there is chatter about admitting the United States and China into the CPTPP to create a further-reaching regional trade pact. Mr. Morrison noted that the countries who ratified the agreement were “leaving the door open for others to come join, which we would welcome.”

Having either the U.S. or China in the deal would help small- and medium-sized economies counteract the influence of either country, said Sen. Yuen Pau Woo, an expert on the issues facing the Asia-Pacific region.

“If you’re a big economy and you can bully your way around to get preferences for your industries only, then there is a logic to negotiating, bilaterally but that does not benefit the region as a whole,” Mr. Woo said.

“It creates rivalry and tension and is generally not favourable to the promotion of economic growth, peace and security in the Asia-Pacific, which is still a very volatile part of the world.”

The volatility of the relationship between China and the United States was on full display at this summit of leaders from the 21 member countries of the Asia-Pacific Economic Co-operation group, who combined represent about 60 per cent of the global economy and half of global trade.

Chinese President Xi Jinping and U.S. Vice-President Mike Pence traded barbs on Saturday and laid out competing visions for trade and investment in a battle for global influence.

Mr. Pence and Mr. Xi left the summit by early Sunday afternoon amid what reports described as tense backroom negotiations on the wording of the final communique from the summit.

In his meeting with Mr. Morrison, Mr. Trudeau said Canada and Australia have been “aligned over these past couple of days on big issues of trade and the rules-based order,” but noted that “conversations are going on to the last minute.”

A statement on Sunday from the host country said Mr. Trudeau and other leaders worked to use APEC “as a driver of economic integration and growth, at a time of heightened risks.” 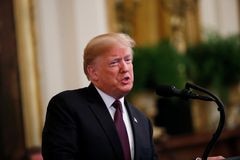 Trudeau intends to work toward free-trade deal with China, despite clause in USMCA
November 15, 2018 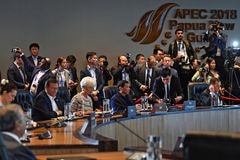