Prime Minister Justin Trudeau denounced Islamophobia and right-wing extremism on Tuesday following reports of threats to a Toronto mosque, saying Canadians needed to stand against hate of any kind.

But the National Council of Canadian Muslims, which sounded the alarm over the threats on the weekend, said Ottawa needed a plan to counter hatred that goes beyond decrying the problem.

Trudeau tweeted on Monday night that he was “deeply disturbed” by the reported threats, which are being investigated by police, and pledged to do more to fight hatred.

On Tuesday, he said the reported threats were “unacceptable.”

“Islamophobia and right-wing extremism have no place in our country or our communities,” he said. “We must always stand united against hate or intolerance of any kind.”

When asked for details of a plan to address such incidents, the Prime Minister’s Office did not immediately respond to requests for comment.

Mustafa Farooq, the president of the National Council of Canadian Muslims, said a national strategy was needed.

“Commitments are good, but we need action now,” he said.

The organization said the Toronto mosque, which it did not name for fear of further threats or violence, received several emails around 3 a.m. Saturday.

The messages threatened to kill every Muslim and referenced two mosques in Christchurch, New Zealand, where a gunman killed 51 people in 2019, Farooq said.

“We have the guns to do a Christ church all over again in our office,” the message read in part, Farooq said.

On Monday, the Liberal Muslim Parliamentary Caucus, which is composed of Muslim members of parliament, said it will be meeting with Trudeau and Public Safety Minister Bill Blair in the coming days to discuss the matter.

“However, incidents of hate, violence and murder continue to occur and far-right hate groups fester on dark corners of the web and in person,” it wrote. “We recognize much more needs to be done.”

Farooq said the threats reported over the weekend have shaken the Muslim community across the Toronto area.

“There’s a lot trepidation at the mosque and we were getting calls from a number of the leading mosques about whether any mosque should be open,” he said. “We’re not going to allow ourselves to be bent or broken by these threats.”

The downtown mosque has been closed since the incident occurred, but Farooq said it will reopen in the coming days.

The reported threats come about a month after Mohamed-Aslim Zafis, 58, was stabbed to death while volunteering outside a mosque in northwest Toronto.

Guilherme “William” Von Neutegem has been charged with first-degree murder in Zafis' death and is set to return to court on Nov. 5. Investigators said last month there was no known motive in the case.

The Canadian Anti-Hate Network alleges that social media accounts under the name William Von Neutegem show a chant and symbol on YouTube associated with a neo-Nazi group that encourages killings. It also alleges an account with the same name follows a white supremacist on Twitter. The Canadian Press has not verified that the accounts belong to the accused. 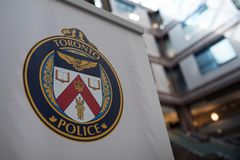