Liberal Leader Justin Trudeau proposed extending COVID-19 business supports on Monday and Conservative Leader Erin O’Toole released his party’s platform, which would scrap the Liberals’ child-care plan in exchange for a tax credit, and vowed to bring back one million lost jobs.

NDP Leader Jagmeet Singh, meanwhile, said his party would ensure that companies that accepted the federal government wage subsidy during the pandemic and used it for bonuses for “ultrarich” executives pay back the money.

The party leaders made their pitches for Canada’s economic recovery from the pandemic as the federal election campaign entered its second day.

At an announcement in Longueuil, Que., Mr. Trudeau said a re-elected Liberal government would extend some emergency supports and create new ones tailored to the hardest-hit industries. The Liberals did not release the price tag for the planned new spending. The party said it would be provided later in the campaign when the Liberals publish the overall costs of their platform.

“For hard-hit businesses who get the workers they need, to workers who get the jobs they need to support their families, this is a win-win,” Mr. Trudeau said.

The Liberals are proposing to extend the Canada Recovery Hiring Program, which is set to expire in November, until March. The program allows employers to offset a portion of the costs of reopening from pandemic lockdowns by increasing wages and hours or hiring more staff.

The party said it would also provide the tourism industry with up to 75 per cent of expenses for wages and rent through the winter; match ticket sales in the arts and culture sector to compensate for reduced capacity limits; extend pandemic-related insurance coverage for media production; and create a $50-million fund through the Canada Council for the Arts to provide emergency relief to artists who are primarily self-employed or independent contractors.

On his second day in a virtual studio in Ottawa, Mr. O’Toole released his party’s 160-page platform, titled “Canada’s economic recovery plan.” It includes sections about jobs, anti-corruption, mental health, the economy and domestic vaccine production. Mr. O’Toole pledged to bring back one million jobs lost during the pandemic and stuck by his promise to balance the budget in 10 years.

“This election is about who you think can get us out of the recession and rebuild the economy,” Mr. O’Toole said.

The Conservatives did not publicly release the overall costs of their plan, but the party said it has sent its platform to the Parliamentary Budget Officer for review, with a response expected in one or two weeks.

The party said that if it were to form government, the Liberals’ $10-a-day child-care plan would effectively be scrapped. Instead, the Conservatives vowed to offer a refundable tax credit, which would cover as much as 75 per cent of the cost of child care for lower-income families.

Ottawa has already signed child-care deals with seven provinces and one territory.

He added that Ottawa has inked deals with several provinces led by conservatives, including Saskatchewan and Manitoba.

Quebec Premier François Legault has been enthusiastic about the child-care deal with the federal government. Mr. O’Toole was asked on Monday about the risks of scrapping a deal that has been embraced by the government in a province where the Tories are looking to make electoral gains.

Mr. O’Toole said he has a lot of respect for Mr. Legault and that Conservatives “will always respect provincial jurisdiction.”

“Our approach will also help all families across the country, including in Quebec,” he said.

Jennifer Robson, an associate professor at Carleton University who specializes in social policy, said she would be upset if she was part of the governments that signed deals with Ottawa and now had public, multiyear commitments and plans for expanded child-care spaces.

“This is exactly the scenario that I think has been a challenge for getting agreements because if the agreements can so easily be cancelled, why would any province be willing to come to the table?” Prof. Robson said.

The Conservative Party’s jobs plan would involve paying 50 per cent of the salaries of net new hires for six months after the Canada Emergency Wage Subsidy expires in October. It also proposes loans of as much as $200,000 to help small- and medium-sized businesses in hospitality, retail and tourism, with 25 per cent forgivable, as well as a 15-per-cent tax credit for vacation expenses of as much as $1,000 per person for Canadians to vacation in Canada in 2022.

Dan Kelly, the president and chief executive officer at the Canadian Federation of Independent Business, said it was “good news” that both the Liberals and Conservatives shared commitments to small business on the first full day of the campaign and he was impressed both appear to understand the economic effects of the pandemic are not over.

Opinion
Here are the issues that should be debated this federal election, but probably won’t
Subscriber content
August 13, 2021
Opinion
Canadians didn’t ask for an election. But like the pandemic, here it is
August 15, 2021 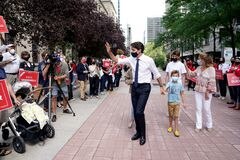 Opinion
Get ready for an unnecessary snooze of a Canadian election
Subscriber content
August 12, 2021 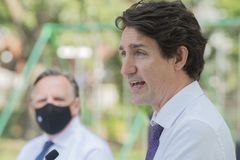 Follow Laura Stone, Marieke Walsh, Ian Bailey and Kristy Kirkup on Twitter @l_stone @mariekewalsh @ianabailey @kkirkup
Report an error Editorial code of conduct
Due to technical reasons, we have temporarily removed commenting from our articles. We hope to have this fixed soon. Thank you for your patience. If you are looking to give feedback on our new site, please send it along to feedback@globeandmail.com. If you want to write a letter to the editor, please forward to letters@globeandmail.com.
Comments