Readers respond: The virus of Trumpism and his infectious moral failings

Best thesis of Trumpism I’ve read. Trump is many things – libertine, demigod, grifter, blowhard – but one thing he absolutely isn’t, is a conservative. Clearly he and his followers are like the ancient king who could only feel tall by cutting off the heads of those around them. Trump has given licence to the grifters and graspers and little people among us. They feel tall now. –crazy old cat lady

What should a Canadian make of Donald Trump?

His policies have not been good for Canada, particularly on the economic front.

As well, his disregard for truth in politics and open contempt for divergent opinions has encouraged similar tactics in our own political culture. However, our political culture and “fault lines” are significantly different than those of the United States. As a result, the same tactics applied here may produce different and more serious consequences.

His legacy in the U.S. will be a highly divided political culture that risks disrupting politics for the next decade or so at least. As Canadians we should be worried about that. We may be collateral damage in ways we cannot yet foresee.

We are a small country living next to a big and, increasingly, unpredictable neighbour in an increasingly volatile world. I hope Canadians will remember we have to stick together if we are to maintain our expectations for peace, order and good government. –Milkman7

This article is an unbiased recital of the facts. These facts are incontrovertible, no reasonable person can disagree with them. And so when everybody knows the facts, how can it be that Trump has 40-per-cent support? I believe Andrew Coyne has hit on the answer. Trump supporters think like he does and they always have. Trump has simply legitimized the nasty side of some people who are now free to voice their true beliefs. The scary question that remains after the “acquittal” is what is next? We live next door to an unbridled president who now believes he can do anything without consequence. If the next election is a close loss for Trump, which is a real possibility, I fear he won’t leave. “President 4evr”. –farkie1

‘Supporting Donald Trump should not be viewed as a character flaw.’ Readers forecast more years of Trump, plus other letters to the editor

‘That sound of silence you hear is U.S. democracy being squandered.’ Readers react to Donald Trump’s acquittal, plus other letters to the editor

‘Trump’s fate should be decided by the American public.’ The impeachment trial, racism and the coronavirus, Bombardier, plus other letters to the editor

Sadly, I agree that he is looking more and more like the leader of a political cult movement. I don’t disagree with all his policies, but the way he speaks of others and treats them seems so contrary to the spirit and I believe intent of the U.S. Constitution and the values upon which it was based.

He may well be re-elected. At this point, I have to wonder if the only candidate able to beat him may be Mike Bloomberg – though I realize he isn’t yet the nominee and may not be. He may have the confidence, resources and business abilities to take Trump on, and offer a competent, centrist alternative. I just can’t see the other candidates doing it.

I truly hope we can retain and encourage civil political discourse in this country. There can be loads of room for a wide swath of ideas, if there is a basic human respect for each person. Gracious winning – and losing – are critical to stable democracies. May we pass on to the next generation the blessings of living under such a system. Compromise and basic courtesy aren’t weaknesses – they’re strengths. –Gary W Moore

An excellent and overdue article. Andrew Coyne represents the lament of many of the decent, reasonable conservatives. Conservative in the United States have lost credibility and honesty in exchange for hate, cynicism and lies masquerading as “good” or some unhinged fight against elites. As a working-class kid from a working-class family, it is disgusting to watch. All Canadians have an interest in seeing this thinking and these people exposed for what they are: foolish, spiteful and irrational. –The jolly hangman

A great article which, in detail, accurately sums up the situation in the United States. As I have many relatives who live there, I hope that once Donald Trump is gone, his supporters, both the electorate and the politicians, will somehow recover their integrity. Although, I do believe that the underlying cause for the support from his base is their increasing dissatisfaction and lack of confidence in politics in general. This will also have to be addressed someday. –Anxious2017

The federal government of the United States was set up in a time of different morals and code of conduct. It is essentially obsolete compared to today’s modern political systems of Europe and Asia. Since 1776, the political system in every other country has changed from external and internal pressure.

I’ve read every Sherlock Holmes short story and book. What strikes me is the code of conduct of people who lived in the Victorian age and how much honour meant to them. In The Adventure of Charles Augustus Milverton, the blackmailer is killed by the wife of the man who died of a broken heart. In A Scandal in Bohemia, a royal wedding will be called off if the knowledge that the king had a former girlfriend five years ago came out.

The Founding Fathers never expected that a liar and scoundrel such as Donald Trump would become president. They always expected a gentleman with discipline and a sense of duty. This is why they never setup a mechanism to easily remove a president. I think everybody can agree that Trump has no honour and will happily blackmail others for his own personal gain. –wkl

I recently finished reading Robert Caro’s brilliant, four volume biography of Lyndon Baines Johnson. LBJ was an egotist, philanderer, racist bully and two-faced boor. But he was a saint compared to the current occupant of the White House. –Wilkins Micawber

Donald Trump is no monarch. He is not any of the various British kings of the last 300 years, ready to let their responsible ministers govern, nor is he any of the Russian czars, who for all their instability and tendencies to misrule on a whim or on a misunderstanding, had a fatalistic sense of responsibility given only to those put in place not by ambition, but by birth and obligation.

Power corrupts, but ambition corrupts more. It’s impossible to look at Trump and disagree. And ambition creates despots, not kings, and before they become despots, they are demagogues.

But they are not kings, not in their fondest dreams.

A republic fears a monarch – unnecessarily. It should fear more its inevitable end when demagogues’ power is left unchecked. –Alex Shetsen

Feb. 12: ‘Supporting Donald Trump should not be viewed as a character flaw.’ Readers forecast more years of Trump, plus other letters to the editor
February 12, 2020 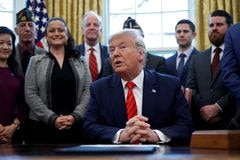