The dogs in the dog park near my home were running especially crazy because their owners weren’t paying any attention to them. The owners were all talking to each other, and they were all talking about the same thing – the demonstration in Washington, as a mob incited by Donald Trump stormed the U.S. Capitol building. It was 4 o’clock in the afternoon. “I had to get outside, I had to stop watching it for a while,” one of the owners (Playdough, a cockapoo) said. She was a transplanted American with a kid in Atlanta. “My husband made me take my cellphone, in case.”

It was a day of vast emotional amplitude. It began with the bracing news of not one but two upset Democratic Senate wins in the Georgia runoff votes. It was ending with evidence that the world’s longest-standing democracy was melting before our very eyes.

What made it admittedly gripping but also exhausting was that the events kept escalating, each development more shocking than the last. There was no letup. Unprecedented followed unprecedented. The President incited the mob, both on Twitter and at his rally on the Ellipse, at the foot of the White House: “You’ll never take back our country with weakness,” he declared. “You have to show strength and you have to be strong.” He sounded more and more disconnected as the day went on. Rudy Giuliani called for “trial by combat.” Donald Trump Jr. declared to the congressmen and women who had accepted the election results, “We’re coming for you.” The soon-to-be-retired (and possibly removed) President said he’d walk with the mob down the mall to the Capitol building. He did not, in fact. Standing safely behind a wall of uninterrupted bulletproof glass, he looked like a carved plastic figurine in a snow dome.

The death of a woman who was shot in the chest in the shadow of the Capitol was a terrible development, but there was no time to get upset about that. She was instantly replaced by the next spectacle – a rabble of white male protesters in MAGA caps (in all the photographs I have seen of the day, I counted a total of three Black people) storming the doors of the Capitol.

But there was no time to be disturbed for long by the breaching of one of the world’s most visible symbols of democracy, because then the protesters began roaming the rooms inside. They did not present the image of a committed group of devastated and outraged patriots articulately defending the electoral process. (In one of the many ironies of the astonishing day, Mr. Trump said they were protesting against the stealing of an election that they were, in truth, themselves trying to steal.) TV reporters on the scene began referring to them as terrorists, but they behaved like adolescent idiots. The rhetorical high point occurred when one of the protesters scratched “Murder the Media” into a door in the Capitol. Things went downhill from there. One marauder stole a podium and tweeted a photo of himself smiling as he did so. Another sat in Nancy Pelosi’s office, ditto the photo. Yet another, in an ugly tuque, sat in the Senate Speaker’s chair, raising his fat arm, photographing himself. Many of them had the same thin, trucker’s beard. “In the end, their stupidity remained intact,” my wife said during one of the relatively few quiet moments when I wasn’t telling a smug-looking protester on the TV to perform an anatomical embarrassment on himself. They barged in, they made a mess, they stole an envelope, they left. They changed nothing.

The idiots were strangely upsetting anyway. It wasn’t that they were desecrating important symbols (the politicians themselves do that with regularity). It was that they were so literally mindless, and had so little to say. What was infuriating was that they were wasting the goodwill of America for a cause whose importance they didn’t seem to grasp. They needed democracy, but were too empty to understand the threat they posed to it by following the self-regarding whims of their Dear Leader.

Then things calmed down a bit outside, and deeper details seeped through. Unlike many peaceful Black Lives Matter protests over the summer, at the Washington mob insurrection no fire hoses were in evidence, no rubber bullets, no police shields being smashed over peoples’ heads, not even any tear gas. Then again, very few black people were in the crowd. This is the rump that supported Donald Trump, the President who repeatedly warned them that they were going to be replaced by people not like them.

But even that outrage didn’t last long, because then Joe Biden gave a surprisingly moving speech, a response to the mob’s insurrection. He had meant to talk about the economy, but instead he reached further out, and spoke of democracy’s optimism. It always hopes for the best. But this day was a display of how low it can go as well. Biden challenged the President to call off his dogs.

The President didn’t. His official response, taped beforehand and aired shortly after Mr. Biden spoke, was to say again, falsely, that his supporters had been cheated of a landslide victory in the election, but that now they had to go home. “We love you,” he said, by way of signing off, which seemed like a pretty gormless thing to say in itself.

I had to tend to some business then, and leave the TV spectacle. By the time I got back, the Senate was in session again, and Mitch McConnell – one of the President’s biggest enablers – was on his feet, shamelessly distancing himself from the uprising. But at least they were back at work. The delicate clockwork of democracy was at least in motion again. I felt a little bit better. 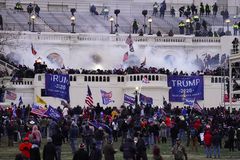 Analysis
Trump supporters engage in historic attacks on U.S. democracy on a day reserved to celebrate it
Subscriber content
January 7, 2021 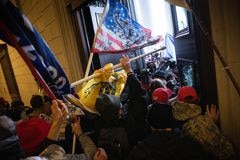 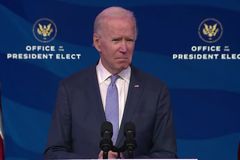