Visitors to Tuktoyaktuk don’t require geology degrees to see the community has a serious problem. Along the peninsula at its northern edge, known as the Point, a line of homes just feet from the carved-up shoreline, one bad storm away from toppling into the Beaufort Sea. If you look more closely, you can find the shredded remains of various initiatives over the years to slow erosion, which has greatly accelerated thanks to rising temperatures and sea levels – and, as is the case in many Northern communities, melting permafrost.

Big problems often require big solutions. Mayor Merven Gruben envisions a barricade of locally built concrete slabs running along almost a kilometre of the peninsula’s western shore – by far the most ambitious proposal the hamlet has ever seriously considered.

It’s one of several options in a report from W.F. Baird & Associates Coastal Engineers, which the hamlet recently hired to study possible solutions. Now, Mr. Gruben is seeking tens of millions of dollars from the federal government to finance its construction.

“That’s going to be our main priority right now – to build that up,” he said. “Because we’re losing infrastructure and lands inside the harbour already.”

As Canada’s North warms at one of the fastest rates on Earth, Tuktoyaktuk is among the first communities in the country to face an existential threat from climate change.

From above, Tuk – as it is commonly known – already resembles a half-eaten block of Swiss cheese. And it’s not just homes that are at risk: The cemetery is also on the Point. Nearby Tuktoyaktuk Island, which shelters the harbour, is wasting away even more quickly; if nothing is done, projections show much of it could be destroyed by 2050. 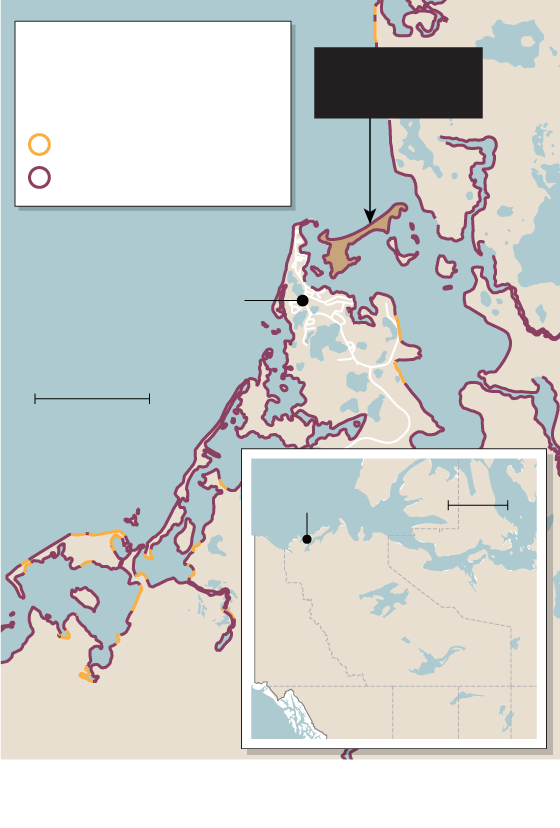 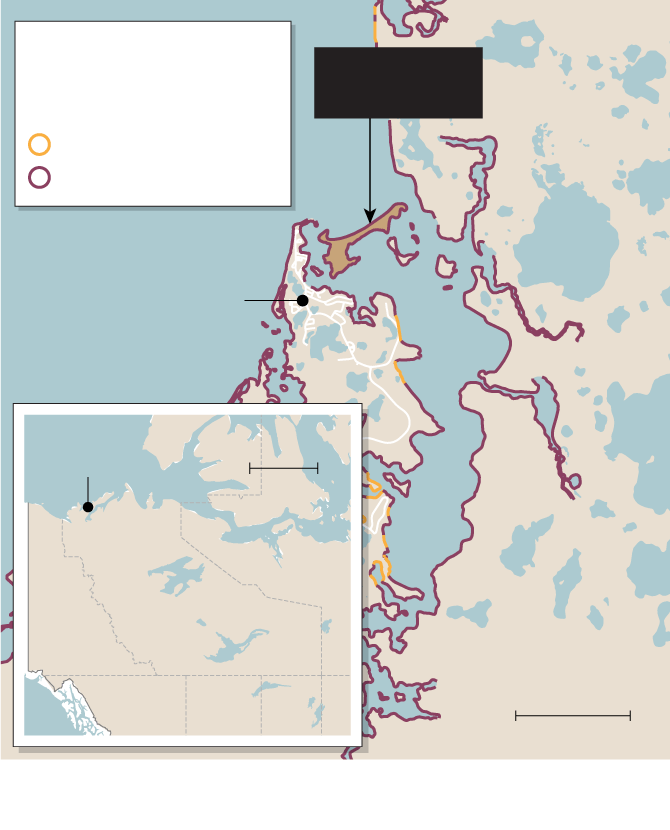 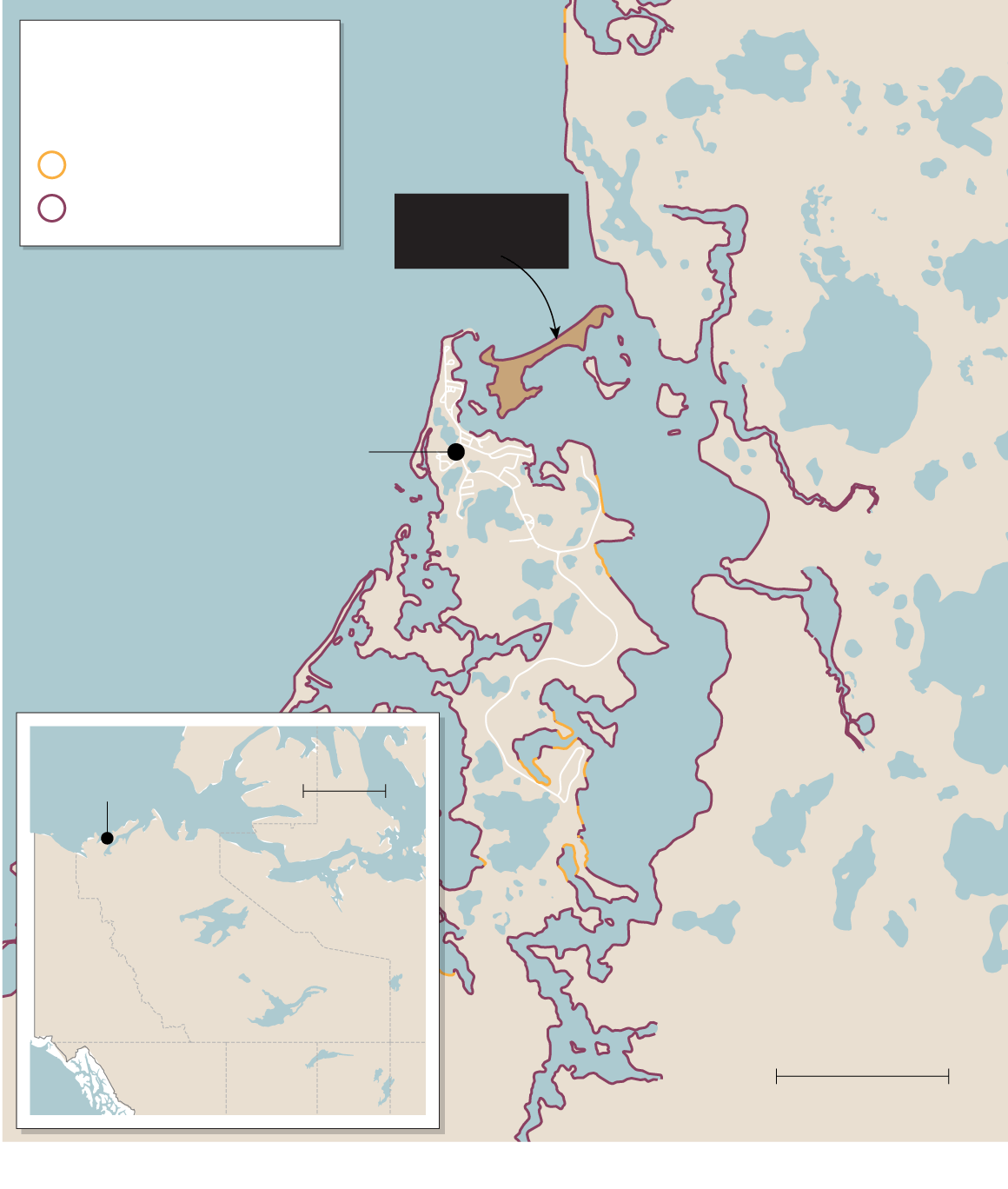 Tuk’s experience serves as a distant early warning to other communities that may face similar threats in the decades ahead. Even when all levels of government understand what’s at stake, finding workable, affordable solutions can be painfully slow and devilishly challenging.

Mr. Gruben’s preferred solution – the slabs – is informed at least partly by experience. Since the 1970s, the hamlet has tried everything from sandbags to boulders to concrete slabs. It’s generally agreed that a segment of slabs installed along the Point’s shoreline in the 1990s has performed the best. But Baird’s preferred solution is to protect both the Point and Tuktoyaktuk Island with large beaches, piling sand at strategic points and allowing currents to distribute it over time – a technique known as beach nourishment. Baird predicts the slabs would be less effective and would not address rising sea levels.

Dustin Whalen, a physical scientist with Natural Resources Canada who has worked in the community for a decade, said the beaches seemed to be the most attractive options among those weighed in the Baird report. But he warned that new beaches would likely accelerate the degradation of the permafrost, which might ultimately render them useless. Battered by storm surges, waves and ice, Baird suggests the beaches would have a design life of just 30 years and would require constant maintenance. And there’s a significant risk that powerful storms or other factors could ruin them well before that.

“History has said that long-term shore protection in Tuktoyaktuk is not working,” Mr. Whalen observed. “So in 20 years, are we just going to add this one to the list? Or is this the plan that the community has been waiting for?”

Whatever option the hamlet selects, the cost will greatly exceed local budgets. Tuk’s total revenue from all sources amounted to less than $2.4-million in 2017, and the territorial government lacks any sizable infrastructure funding.

“Anything we would have currently would be fairly small in size and scope,” said Eleanor Young, deputy minister of the territory’s Municipal and Community Affairs Department. But once the hamlet selects its preferred solution, Ms. Young said, her department would help it apply for federal funding.

Ottawa has several programs aimed at helping communities adapt to climate change, one of which paid for most of the Baird study. But how much is the federal government prepared to spend on what can only be regarded as temporary measures to protect this tiny Northern hamlet of roughly 1,000 souls?

Mr. Gruben admitted the preferred project’s cost was “a big ask” and doubted the bid for federal funding will see much progress before the federal election in October. But he predicted the next government would be receptive.

“Tuk is really on the map and a focus of a lot of things that are happening in the North in Canada," he said.

Major infrastructure projects in the North can take decades to complete, even when multiple levels of government broadly agree on their necessity. For example, Tuk residents first began campaigning for an all-weather road joining their community with Inuvik, to the south, back in the 1960s. The territorial and federal governments finally agreed to build it because they wanted a highway to the Arctic Ocean. But the 138-kilometre road wasn’t opened until Nov. 15, 2017.

Right now, there’s little consensus, even locally, on how to proceed. While the hamlet governs the peninsula, for instance, the island is owned by the Inuvialuit Regional Corp. There’s considerable tension between the two organizations, which have barely begun co-ordinating a strategy to save the community.

“If we lose that island, we’re screwed,” Mr. Gruben said. “But it’s been really hard dealing with the [IRC].”

Other Northern communities are grappling with thawing permafrost, which can wreak havoc on roads, schools, homes and hunting trails. But few have yet been forced to consider the radical options Tuk must now contemplate.

Brian Horton, manager of Yukon College’s Northern Climate ExChange in Whitehorse, studies adaptation across the North. He says most communities he’s familiar with are in the early stages of responding. “Communities are gathering the information that they need to be able to start taking measures now, in most cases, in the Yukon,” he said. “They have been taking small steps.”

Much of the emerging literature on climate-change adaptation favours moving people out of harm’s way rather than erecting defensive structures. But when Baird held community meetings, few Tuk residents seemed eager to relocate. Its report briefly considered the logistical challenges of moving the community – the roads, water and power infrastructure, cemetery and reservoir aren’t exactly portable. “It was generally agreed that relocation is not a solution that could be developed in the short term," Baird noted. “Protecting the shoreline will allow the community time to consider this option further."

Mr. Gruben said the community has been gradually moving inland for at least a decade and expected that to continue. “A lot of people don’t like it, but you know, it’s something that we have to do.”

Tuk’s experience with relocation thus far hasn’t been encouraging. Vulnerable homes have been removed from the peninsula, and the hamlet encouraged owners to relocate to an inland neighbourhood known as Reindeer Point. When Globe and Mail journalists visited the community in 2017, four more homes appeared to be just one bad storm away from destruction; the hamlet announced that those, too, would move.

Two years later, they still haven’t budged. Eddie Dillon, a former mayor who is now chair of the Tuktoyaktuk Community Corp., a local arm of the Inuvialuit Regional Corp., said a July storm with winds reaching 100 kilometres an hour crumbled more of the surrounding shoreline.

“One of my issues with the hamlet is that that they were given $800,000 to address the moving of those houses,” he said. “And yet, there’s no plan in place … at the end it’s going to be an emergency situation.”

Mr. Gruben agreed that the houses should have been relocated last winter, but he blamed the territorial government, which he said requested engineering studies that have caused delays. “They’ve been really screwing us up here."

Ms. Young said funding has now been secured and suitable land has been found for the houses. The territorial government is looking for gravel to prepare the new lots to receive the homes. Next, structural experts must estimate the cost; if it’s too high, building new homes might be required instead.

“Something I heard, even in the early conversations with Tuk, was that we probably didn’t spend enough time planning 20 years ago,” Ms. Young reflected. "The more lead time you have, the better you can plan so that you’re not making these decisions at the last minute. That has been one of the things that’s become really apparent to me.”

In 2018, Tuktoyaktuk was one of five Canadian coastal communities featured in a series by Matthew McClearn looking at the frontiers of the climate crisis. You can get caught up on the full series below, and take a deeper look at the underlying science here.

In Tuktoyaktuk, residents take a stand on shaky ground against the Beaufort Sea’s advance

Halifax’s battle of the rising sea: Will the city be ready for future floods and storms?

For Port of Vancouver, underestimating Pacific sea-level rises could come at a high price