Nunavut is reporting two COVID-19 cases in Kinngait, Nunavut, but the territory’s chief public health officer says they’re not related to the ongoing outbreak in Iqaluit.

Until now, Iqaluit was the only one of Nunavut’s 25 communities with active cases of COVID-19.

Starting Tuesday, all travel to and from Kinngait, a community of about 1,400 on the southern tip of Baffin Island, is restricted.

Kinngait will also see the same lock down measures as Iqaluit, with indoor public gatherings banned and schools shut.

With the new cases reported in Kinngait, all communities in the Baffin region will face increased restrictions, with gatherings restricted to a household plus five people and schools moving to a blend of in-class and remote learning.

Earlier Monday, the territory confirmed six more cases in Iqaluit where an outbreak has shut down all schools, non-essential businesses and workplaces.

Nunavut’s chief public health officer said all those currently infected with COVID-19 in Iqaluit, a city of about 8,000, were adults mostly in their 20s and 30s.

Patterson declared an outbreak in the capital on Friday, two days after Iqaluit’s first case in the pandemic was reported.

Anyone who left the city on or after April 7 was asked to isolate in his or her home community for 14 days.

“Mandated isolation is also an important measure to reduce the risk of spreading the virus to other communities,” Patterson said.

He said that, as of Sunday, 130 contacts involving the Iqaluit cases had been identified.

He also said cases will continue to rise for the next few days as contact tracing continues in Iqaluit. Between five and 10 per cent of high-risk contacts will usually test positive for COVID-19.

But Patterson also said the number of high-risk contacts has already started to drop.

Patterson said he didn’t know if the 28 people infected in Iqaluit had been vaccinated, but added there is “no evidence of vaccine failure.”

The source of Iqaluit’s first COVID-19 case is also still unknown. The first case was a Canadian North airline worker who had been in the territory for over two weeks before showing symptoms. It’s possible the person contracted the virus in Iqaluit, Patterson said.

Since that first case was reported April 14, there have been 263 COVID-19 tests in Iqaluit, 235 of which were negative.

Iqaluit’s lab can process about 200 COVID tests a day, but Patterson said it’s only needing to run 70 to 80 tests right now.

To date, 14,255 people in Nunavut have received one dose of the Moderna vaccine and 10,933 are fully vaccinated. The territory is home to about 40,000 people.

Health Minister Lorne Kusugak urged Nunavut residents not to travel in or out of the territory unless it’s needed.

“Cases in many parts of the country are rising rapidly. The variants are a huge concern and question mark. Please don’t take chances unless it is necessary,” Kusugak said.

Samples of the positive tests have been sent to a southern lab to test for variants of concern, but results won’t be back until the end of the week.

Who can expect to receive COVID-19 vaccines in Canada’s provinces and territories in coming weeks? Plans as of April 18
April 19, 2021 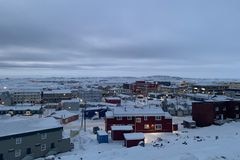 Iqaluit locks down after reporting its first case of COVID-19
April 15, 2021 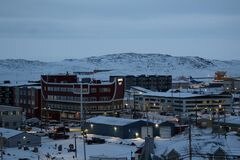