The Ontario Provincial Police cleared the blockade set by Tyendinaga Mohawk protesters that cut a main eastern Canadian railway link for 18 days, but the raid quickly fed new protests across the country, including transportation blockades.

Gitxsan Nation leaders in northern British Columbia returned to a Canadian National Railway Co. mainline near New Hazelton to erect a barricade Monday while protesters disrupted and blocked traffic in two Mohawk territories near Montreal. Other protesters marched in downtown Ottawa and Vancouver.

Earlier Monday, dozens of OPP officers arrested Tyendinaga Mohawk protesters, clearing the way for workers to dismantle their camp, including the snowplow that became familiar along the CN right-of-way near Belleville, Ont. Ten people were arrested and released on a promise to appear in court later to face unspecified charges. No one was injured.

The red-and-black snowplow signed by Wet’suwet’en chiefs, an emblem of solidarity, was removed from the blockade at Tyendinaga Mohawk Territory in two pieces, each atop the flatbed of a tow truck. Protesters warned their action was not over. “We have a replacement truck,” said Andrew Brant, a Mohawk protester and high school teacher.

The Tyendinaga protest began on Feb. 6 in support of Wet’suwet’en hereditary chiefs who oppose the passage of the $6.6-billion Coastal GasLink natural gas pipeline through their traditional territory in northern B.C.

The protesters had demanded the RCMP leave Wet’suwet’en territory. The OPP demanded Sunday that the Tyendinaga protesters leave their camp. Monday morning the OPP arrived in force to break up the encampment that had disrupted CN freight service long enough that businesses laid off workers and authorities warned about supply shortages.

Rather than quell unrest, the OPP operation sparked new blockades and protests.

Members of the Gitxsan First Nation who had taken down their blockade Feb. 13 returned to the New Halzelton CN tracks. Gitxsan Chief Spookwx, who also goes by Norm Stephens, said one person had been arrested. He accused the RCMP of “dragging their feet” on leaving Wet’suwet’en territory and said there are 30 to 40 people at the blockade who are willing to stay until the Mounties leave.

The Kahnawake blockade, which has gone on for nearly three weeks with a handful of people maintaining it at any given time, suddenly had dozens of people demonstrating.

The Mohawk Council of Kahnawake sent a statement expressing “outrage and disgust” about the Tyendinaga raid, pointing to a meeting between the Wet’suwet’en hereditary chiefs and the RCMP as evidence that a peaceful solution may have been reached. They also held a community meeting Monday evening.

“We are really upset the OPP acted this way at this time,” said Kenneth Deer, secretary of the Mohawk Nation at Kahnawake. “They could have waited 12 hours and it could have been avoided. The people are upset.”

Other protests were also continuing in Eastern Quebec on a small Gaspé railway line and along a highway near Rimouski. Commuter train services were also disrupted in Hamilton and Maple Ridge, B.C.

In Ottawa, several streets were closed and there was a strong police presence for the demonstration. Gabrielle Fayant, an Indigenous youth, said she stands in solidarity with the Wet’suwet’en hereditary chiefs. The RCMP must also leave Wet’suwet’en territory, she said. “It’s so simple,” Ms. Fayant said. “I don’t understand why it has gotten to this point.”

The raid took place three days after Prime Minister Justin Trudeau called for an immediate end of the blockades, saying his government had made “every attempt” at dialogue. After the raid, Mr. Trudeau said he expects people to follow the law. “After it became clear Indigenous communities were not prepared to negotiate in good faith with us, we changed positions,” Mr. Trudeau told the House of Commons. “But police decisions were independent decisions.”

Mr. Trudeau highlighted that the police response is a provincial department. Quebec Premier François Legault decried the absence of co-ordinated, national response to protests but also said local and provincial police forces in Quebec will decide whether to proceed in dismantling barricades.

“It’s time it stops,” Mr. Legault said. “I have confidence in the police to act in the right place at the right time. But it’s time.”

The dismantling of the protest on Wyman Road near Belleville started Monday at 8:15 a.m. when OPP liaison officers made a scheduled visit to the protesters, but this time delivered a warning that arrests were coming. Behind them, dozens of officers wearing baseball caps emerged from police vehicles.

The officers pushed the protesters away from their camp and off CN-owned land, wrestling with some protesters and making the 10 arrests. A standoff ensued between the officers and about a dozen protesters, which was broadcast on a Mohawk Facebook page called Real Peoples Media. The protesters accused the officers of reinforcing centuries of colonial rule. “This is Mohawk territory … you guys are trespassing,” one of the demonstrators could be heard shouting to the officers.

The officers were silent. After about an hour, the demonstrators retreated and work began on tearing down the camp and inspecting rails and signals. An OPP prisoner transport van drove off Wyman Road around 10:30 a.m. Protesters inside the van were yelling and banging on the walls.

By late afternoon, protesters regrouped near the scene of the morning’s skirmishes, keeping a safe distance from police flanking the tracks. Supporters joined protesters, many bringing food, firewood and cases of pop. “I’m just here to support my people,” said Len Maracle, a 63-year-old resident of Tyendinaga.

Born and raised in the First Nations community, he said this month’s rail standoff is the most significant protest he has witnessed in his long history there. He suspects the OPP arrests may galvanize more resistance.

“They might stop one blockade, but then more will pop up across the country,” Mr. Maracle said. Asked whether he thought the worst tensions were over, he replied “not by a long shot.”

With reports from Justine Hunter in Victoria, Wendy Stueck in Vancouver, Kristy Kirkup and Bill Curry in Ottawa, Karen Howlett in Tyendinaga Mohawk Territory, and The Canadian Press.

Arrested pipeline protesters yell from within police transport van
0:48
May 7, 2020 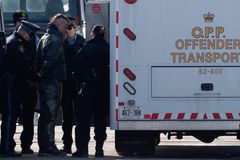 Follow Les Perreaux, Karen Howlett, Colin Freeze, Kristy Kirkup and Bill Curry, Andrea Woo on Twitter @Perreaux @kahowlett @colinfreeze @kkirkup @curryb @andreawoo
Report an error Editorial code of conduct
Due to technical reasons, we have temporarily removed commenting from our articles. We hope to have this fixed soon. Thank you for your patience. If you are looking to give feedback on our new site, please send it along to feedback@globeandmail.com. If you want to write a letter to the editor, please forward to letters@globeandmail.com.
Comments