A United Conservative Party nomination candidate has been turfed after he and his fellow challengers were photographed with an anti-immigration group linked to neo-Nazis in Europe.

The other two candidates said they didn’t realize they were meeting with the Soldiers of Odin. But Lance Coulter said he was aware of who they were and was OK with it, because he believes in free speech and felt obliged to respond to their polite conversation.

UCP executive director Janice Harrington disagreed in a letter Thursday to Coulter that advised him of his disqualification.

“A polite racist is still a racist,” wrote Harrington.

“We strongly disagree with your seemingly sympathetic assessment of Soldiers of Odin and are frankly disturbed with your cavalier attitude taken to a hate group attending a United Conservative Party event.

“Our leader Jason Kenney has been clear that such hateful groups are not welcome.

“This incident has resulted in reputational harm to our party and its many members.”

The party did not make anyone available to comment about the decision.

Premier Rachel Notley, asked about it at a news conference, noted that the decision didn’t come until six days after the pub event.

“It’s good news that he has been disqualified. I would say it comes a little late, quite honestly, in this case,” she said.

“There is no room for a debate about how much racism is OK. There is a line that I believe the vast majority of Albertans understand exists. And the concept of neo-Nazism is well past that line.”

Coulter could not be immediately reached for comment, but on his Facebook page acknowledged his disqualification, and said a lot of people had reached out to him.

“Your support and kind words have only strengthened my resolve to do what I believe is right,” wrote Coulter.

“I will not lie for political expedience. I will not simply smile and tell people what I think they want to hear. I will treat all people with dignity and respect.”

The pub night was a private event at a bar Oct. 5 with Coulter and fellow nominee candidates Leila Houle and Nicole Williams. All three posed for photos with the Soldiers of Odin, who wore identifying jackets and hats.

When the photos circulated in the media over the weekend, both Houle and Williams issued a joint statement condemning the group and saying they had no idea who the Soldiers were when they posed with them. Coulter did not sign the statement.

On Wednesday, Coulter said he did a quick Internet check on the Soldiers that night at the pub and decided to engage with them. He noted that while their European activities were questionable, the Canadian contingent appeared to be engaged in more benign community outreach such as helping out at a soup kitchen.

Harrington said Coulter compounded his error by not flagging the group’s presence at the event so the UCP could take action.

“The party was never afforded that opportunity, in part because you remained silent.”

Coulter is one of several UCP candidates who have been disqualified or allowed to run despite making controversial comments against minority groups.

Todd Beasley was disqualified as a candidate in Brooks-Medicine Hat in the summer after making anti-Islamic comments on social media.

Also in the summer, Sandra Kim was allowed to run for the nomination of Maskwacis-Wetaskiwin despite homophobic social media comments from 2015.

Cindy Ross, a one-time nominee for Calgary Fish Creek, apologized last month for online comments she made years ago opposing the opening of a mosque in Fort McMurray.

Earlier this week, Notley said Kenney needs to take the blame for sending conflicting “dog whistle” signals by condemning hate comments while simultaneously allowing some of those who express those views to run for his party.

Kenney has said Notley is exploiting anomalous situations for partisan gain and called that “gutter politics.” 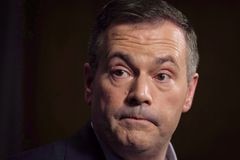 UCP says hateful views have no place in party after candidates pose for pictures with Soldiers of Odin members
October 7, 2018
Report an error
Due to technical reasons, we have temporarily removed commenting from our articles. We hope to have this fixed soon. Thank you for your patience. If you are looking to give feedback on our new site, please send it along to feedback@globeandmail.com. If you want to write a letter to the editor, please forward to letters@globeandmail.com.
Comments