Canadian universities and colleges are facing a potential budget crunch as they try to assess the impact of COVID-19 on international student enrolment, a multibillion-dollar enterprise that has come to represent a significant portion of many schools’ budgets.

“It’s a major concern for Canada’s universities from coast to coast,” said Paul Davidson, president of Universities Canada, the umbrella group that represents universities at the federal level. "The risks they’re facing are real.”

A potential drop in international student tuition revenue, estimated at about $6-billion, is one of the scenarios universities are now plotting as they look forward to a very uncertain fall term in 2020. Mr. Davidson described those projections as ranging anywhere from “the sky is falling” to a modest decline. At the moment, much remains uncertain.

It’s still not known when international travel will resume. Students from India and China, for example, who account for more than half of international students in Canada, could face difficulties even leaving their countries.

Universities may turn to governments for more help to make up any revenue shortfalls.

“Getting through this rocky period may require some stabilization,” Mr. Davidson said.

The COVID-19 outbreak has already disrupted the typical pattern of an admissions process. Recruiting efforts came to a halt early in the year as travel to China, the largest market for Canadian universities, was restricted. Language-testing centres in many countries have shut down, making it difficult for students to get the certifications they need. Admissions offices will have to assess potentially incomplete applications as schools around the world are shut down and potentially unable to supply transcripts or other documentation.

And there’s still a great deal of uncertainty about what instruction on university and college campuses will look like in the fall. It’s not clear whether it will be possible to resume in-person classes or whether instruction will remain primarily online.

A prominent British higher education consultancy, Quacquarelli Symonds, said in a survey of more than 2,800 international students intending to study in Canada, 54 per cent intended to defer admission by a year. They say about 15 per cent of prospective international students have changed their intentions and are no longer planning to come to Canada. If classes are still being conducted online, it’s possible international students could still enrol in September and take part from their home countries.

The Canadian government responded to an urgent request from the postsecondary sector this week by making it possible for students outside the country to register and study online. The government also adjusted its rules on postgraduate work permits, so that time spent in an online course would count toward the time in Canada required to earn a work permit. The possibility of staying, working and potentially earning permanent residency is a crucial part of Canada’s appeal to many international students.

In a little more than a decade the number of international students in Canada has tripled to more than 500,000. The economic impact of their presence in Canada has been pegged at more than $22-billion. And their tuition fees, typically two to six times higher than those paid by domestic students, pay a growing portion of the costs of Canada’s postsecondary system. To take a most prominent example, Cape Breton University in Sydney, N.S., saw its budget grow by 37 per cent in a year, thanks to international student revenue. More than 55 per cent of its student body comes from abroad.

If international student revenues drop, the impact could be felt everywhere from staffing to course selection. Mr. Davidson said that when Saudi Arabia pulled its students out of Canada in 2018 over a diplomatic rift, one of the first questions many universities faced was what courses they could no longer afford to offer.

“Canada has built a university system, and I think a college system, which assumes [it will have] international students,” said Leo Groarke, president of Trent University in Peterborough, Ont. “There’s an awful lot of positives that come with that, whether it’s immigration or the positive effect on the Canadian economy. But in the current circumstances, it may be a challenge.”

Mr. Groarke said Trent was on pace for a strong international recruiting crop before the pandemic. Its goal was to expand international enrolment from 10 per cent to 15 per cent of its student body. Now it’s left trying to make the best of a difficult situation.

“If international students don’t come to Canadian universities, there is going to be a significant budget issue,” Mr. Groarke said. “One option would be that the government could step in and provide us with funding in the short term to manage that. I would think in the end, we will get back to our normal levels of international students.” 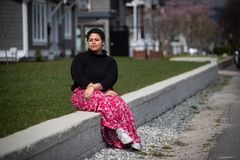 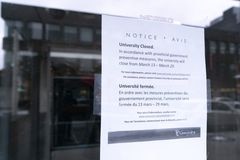 Universities order students in residences to leave, some stay back amid coronavirus crisis
March 18, 2020