Students at the University of Western Ontario are calling for systemic change to address the threat of sexual violence on campus after allegations that young women were drugged and sexually assaulted in residence last week.

Ziyana Kotadia, vice-president of the Western University Students’ Council, said responding to individual wrongdoing is not enough. The university must recognize that it needs a framework to address education, policy and prevention, she said.

“I think that there is a culture at Western that we’ve seen over the course of the last several years that needs to be interrupted,” Ms. Kotadia said. “We need to be thinking about how to address gender-based sexual violence as a system.”

Reports on social media over the weekend said young women in Medway-Sydenham Hall, a Western campus residence, were drugged and in some cases sexually assaulted after gatherings last Friday. The university and London police say they are investigating, but have received no information about the alleged events. They asked students who may have been harmed or were witnesses to come forward.

The London Police Service sent officers on a door-to-door canvass of the residence this week, but provided no further update on Wednesday. The university said four unconnected instances of sexual violence were reported on campus since students arrived for orientation week in early September. In one case, a student was arrested and released without charge, although the investigation is ongoing.

Students are planning a walkout this Friday at noon to protest against what they describe as a harmful campus culture. Organizers have asked Western students to gather on campus to demonstrate and agitate for change, particularly more education and resources to help students navigate their first weeks at university, when the risk of sexual violence is high.

A 2018 survey of student experiences of sexual violence found more than 70 per cent of those surveyed at Western reported being sexually harassed. In the 2017-2018 academic year, nearly one in three respondents at Western said they had been sexually assaulted (defined as a non-consensual sexual experience), about 10 points higher than the average for Ontario universities.

Ontario Minister of Colleges and Universities Jill Dunlop said the government is looking at regulatory changes that would strengthen sexual violence policies at colleges and universities “to better protect and support survivors.”

The Society of Graduate Students at Western issued several calls to action this week, including that new students be required to complete training on sexual violence and gender-based violence. It also said that the university had failed its students by falling short of providing a safe and alcohol-free orientation week.

Events organized by the students’ council during orientation week do not include alcohol, but it is a feature of many gatherings elsewhere throughout the week.

Western University president Alan Shepard was not available for an interview Wednesday. He said earlier this week that the safety and security of students is a top priority. Security patrols on campus have been increased this week, he said, and he urged anyone with information about the alleged incidents to come forward.

Ms. Kotadia said the mood on campus was “emotionally charged” after a tumultuous start of term.

“We’re heartbroken. Lots of students don’t feel safe on campus,” she said. “Our students are disheartened, exhausted. Our community is in the process of grieving.”

In addition to the allegations of sexual assault, a first-year student was killed in an altercation near campus last week. Gabriel Neil, 18, had just arrived at university to study kinesiology. A 21-year-old man was arrested and charged with manslaughter.

With a report from Hope Mahood 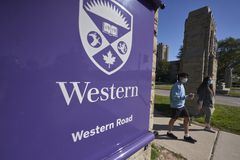