An American murder suspect nabbed in Halifax will remain detained until February, when he’ll have another hearing to determine whether he’s admissible to Canada, a member of the Immigration and Review Board ruled Friday.

Derek Cameron Whisenand was scheduled to appear before the board Friday morning for both a detention review and an admissibility hearing, but refused to leave his cell in Halifax.

A board member maintained Whisenand’s detention on the basis he was a flight risk and a danger to the Canadian public.

Dianne Tordoff also agreed to proceed with a hearing on admissibility on Feb. 11, regardless of whether Whisenand has secured counsel by then. The admissibility hearing scheduled for Friday was adjourned because Whisenand had the right to be present.

“But if a person refuses to attend, the board must proceed with celerity – we can’t just keep postponing the hearing,” Tordoff said.

Whisenand, 28, is a suspect in the June 2019 death of a 78-year-old man in Eastland County, Texas, about 170 kilometres southwest of the Dallas-Fort Worth area.

He has been detained since his Dec. 30 arrest, which came after police responded to a call about the shoplifting of work boots at a Walmart in the city’s Bayer’s Lake area.

A police report filed as an exhibit in connection with his detention said Whisenand had been living in a tent in the woods with his dog near the busy shopping district.

According to the report by Halifax regional police, he was arrested after leading officers on a foot chase and only stopped after a constable threatened to use her Taser on him.

The police report alleged the fugitive was wearing brand-new beige work boots that still had the price tags on them.

He was evasive with Halifax officers and gave a false name – Christian Bates – before the officer found a tattered U.S. social security card with his real name on it, without a birth date, the report states.

After giving police his date of birth, he allegedly pleaded with them to let him go on a promise to appear so he could fetch his dog at the campsite.

Police confirmed they found a tent, clothing, dishes and dog food in a wooded area not far from where the alleged theft took place. The dog was seized by animal control officers.

Whisenand was subsequently turned over to the Canada Border Services Agency and has refused to answer questions from immigration officials.

In July, RCMP warned that he had illegally crossed into Canada near Haskett, Man., sometime during the week of June 24.

Authorities in North Dakota said Whisenand’s vehicle was found about three kilometres from the Canadian border.

Whisenand hasn’t explained how he got to Nova Scotia, but he was believed to have gotten a ride from the border to Winnipeg, then headed toward Atlantic Canada.

He has no family or friends in Canada and has been detained at the Central Nova Scotia Correctional Facility.

Whisenand didn’t participate in his initial hearing on Jan. 2 and told the board at the second one on Jan. 8 that he wished to consult with a lawyer before proceeding on the issue of admissibility.

Michel Gallant, a CBSA hearing officer, said Friday that officers have tried to interview Whisenand, but he’s rebuffed their attempts.

Gallant also said the U.S. consulate in Halifax will provide an emergency travel document if Whisenand is ultimately ordered removed. 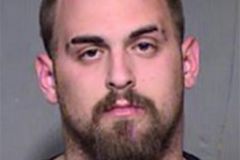