“Don’t be a space invader,” says the poster outside the residence study hall. The decals on the lobby floor say “park yourself here.” Drawings of masked faces near the elevators urge students to protect their friends and classmates at Ryerson University.

Then a student steps out of the elevator into the lobby with no mask on. The residence administrator raises an eyebrow, and points at her own mask. The student sheepishly raises his hands in apology before slipping on a mask fished from his pocket.

As universities reopen this fall, they’re hoping that social engineering and a dramatic reduction in campus activity will keep people safe.

In the United States, where classes started earlier this month, some campuses have seen rapid spread of COVID-19. In most cases, the outbreaks occurred at institutions that attempted to resume normal activities, and some, such as the University of North Carolina at Chapel Hill, have quickly reversed course and moved classes online. While some Canadian schools are staying almost entirely online this fall, most are taking what’s known as the hybrid path, primarily online with some in-person learning where the approach is practical and safe. It’s a compromise, and there are questions about whether it can be done safely.

Universities say they’ve spent considerable time planning to mitigate the risks. Frosh week activities will encourage students to meet via social media and virtual parties, rather than in bars or lecture halls. Residences will be kept to 50-per-cent capacity or lower in many places. Rooms that used to be doubles will be singles. Beds will be left empty to isolate suspected cases requiring quarantine. Hand sanitizer will be omnipresent. Masks will be required in public spaces. Signs will push pedestrian traffic in a single direction and campuses will have significantly fewer people present.

Sandy Welsh, vice-provost, students at the University of Toronto, said the university anticipates about 10 per cent of students will be on campus at any given time compared with previous years. Ninety per cent of courses will have an online option, so students who don’t want to attend in person can opt out. Many students have said they prefer in-person instruction, but universities have to balance those desires with concerns about safety and practicality.

In-person activities will include labs and seminars and courses with practical, hands-on elements that require demonstration, Ms. Welsh said, and they’ll be done with appropriate physical distancing. “If we have a class of 20 students it will be taking place in a classroom where last year we had 120 students.”

Delaney Cummings, the student engagement director at Hoem, a privately operated residence associated with Ryerson University, said many students are staying home this year. As a result, the residence is operating below its usual occupancy levels. That means no one will be assigned to a four-person suite, and no more than two will share a bathroom. If suite-mates have incompatible COVID-19 risk tolerance, they can be switched. There are empty units should anyone need to isolate. So far, it’s been quiet.

“There haven’t been any situations where we’ve had to break up a party,” Ms. Cummings said. “The students have been really respectful.”

Elle De Martini, 18, a second-year student in tourism and hospitality at Ryerson, is in isolation after arriving by plane from New York. She said she’s constantly checking her temperature and is feeling fine.

The residence organizes get-to-know-you events and movie nights online, but they don’t really compare to the in-person gatherings of last year, she said. She gets three meals delivered daily but she’s counting the days until she can just get outside for a walk.

“I obviously know you can’t go to a party right now. It sucks, but you have to do it for the benefit of everyone,” she said.

Many campuses, including U of T, have instituted mandatory mask policies for shared indoor spaces, including classrooms, labs, cafeterias and hallways. Ms. Welsh said the university’s code of conduct also includes rules about not endangering the health and safety of others

Ashleigh Tuite, a professor of epidemiology at the University of Toronto, said she has concerns about the hybrid approach at her university, calling it “vague” and “not really a plan.”

“It’s not entirely clear how they’re going to do that in a safe way,” Prof. Tuite said.

“Look at what’s happening in the United States. If you have high rates of COVID circulating it’s going to be awfully hard to keep it off campuses.”

At the University of Victoria, campus life will be drastically scaled back this fall, said Jim Dunsdon, associate vice-president for student affairs. Ninety per cent of programs will be delivered online. A campus that’s normally buzzing with more than 22,000 students will likely have just a couple of thousand present, he said. Residences are at 38-per-cent occupancy. There will be some classes with three or four people in a room for 50, he said.

“It’ll be quiet ... but there will be pockets of activity,” Mr. Dunsdon said.

But he said comparisons with the U.S. are “apples to oranges” because of the vastly different levels of community spread in the two countries.

Enrolment of domestic students at UVic is on par with last year, as is the case at many schools. But a majority of students will likely choose to stay home in other parts of the country rather than travel to Victoria, Mr. Dunsdon said. 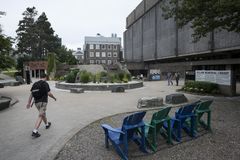 Alberta mandates masks for most students, all staff when schools reopen in September
August 4, 2020 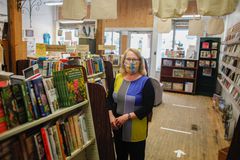