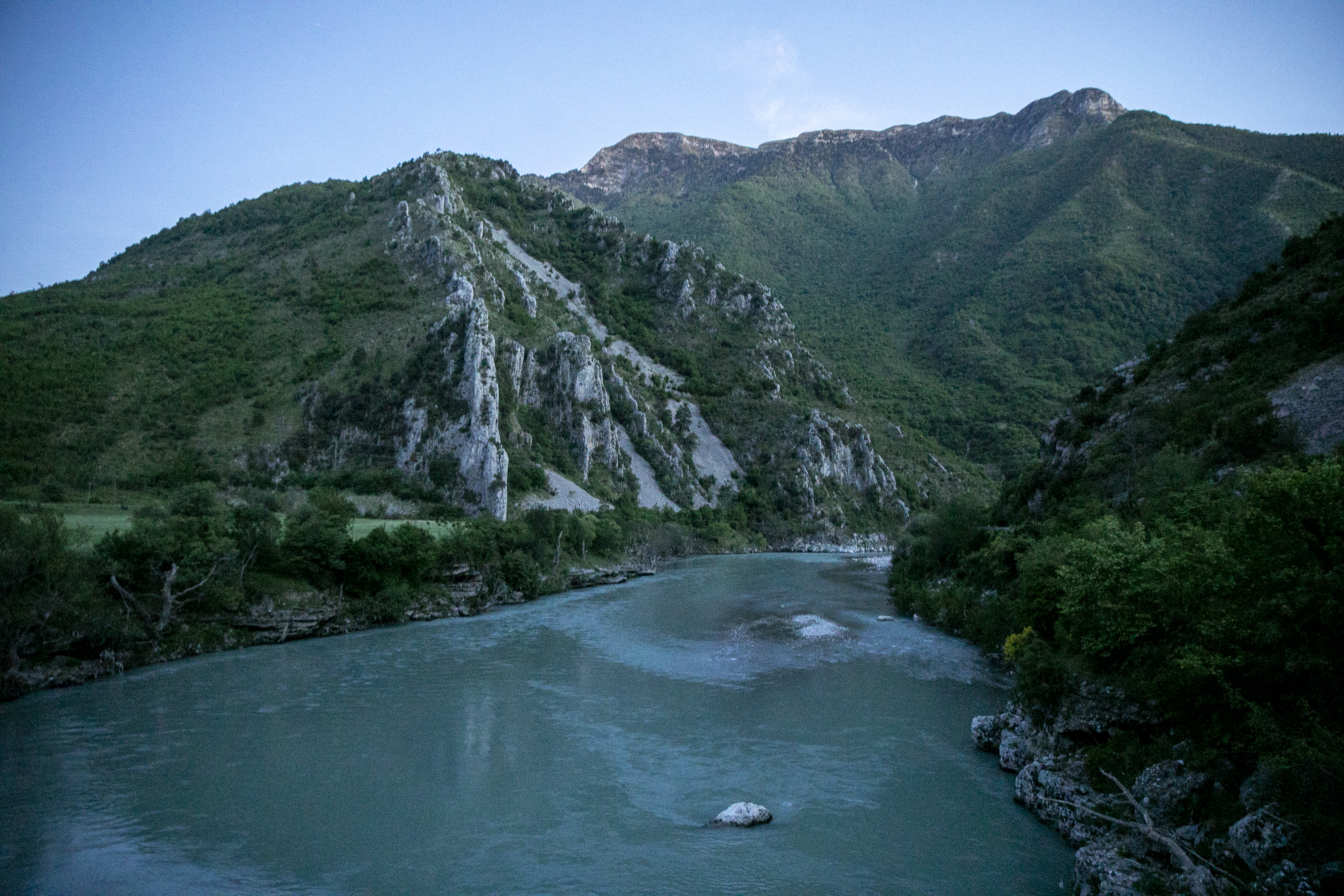 The Vjosa River after sunset near Peshtan, a small mountain village in Albania.

A peaceful quiet hangs over the valley, broken only by the occasional call of sheep and the chirping of birds.

The Vjosa River slowly flows through its 500-metre-wide river bed, winding through the valley in countless arms, all the way to the Adriatic Sea.

The Vjosa is one of the last natural wild rivers in Europe, providing habitat for hundreds of plant and animal species. Many of them are endemic and threatened with extinction, such as the Egyptian vulture and the European eel.

As the lifeline of southern Albania, it shapes the landscape. The Vjosa has dug deep gorges and is constantly forming new gravel banks.

As he does every morning, Janni Merkaj, 25, tends to his sheep on the lush green pastures, along the river banks. He lives in Kutë, a small farming village overlooking the valley.

Like most people in the village and the Vjosa valley, Janni and his family have been making a modest living from farming and raising livestock for generations. But their livelihood is threatened by 27 hydroelectric power plants proposed to be built along the Vjosa and its tributaries, which could forever change the ecosystem and life along the river.

All together, 400 new hydroelectric power plants are being planned in Albania. The government wants to respond to increasing demand for electricity and sell any surplus abroad. A few kilometres away from Janni’s village, a 45-metre-high dam is being proposed.

“If the dam in Poçem is built, we will lose everything. All our meadows will be covered by the reservoir and we have to sell our sheep. The government has promised us compensation, but what are we supposed to live from? It’s not enough money to start over,” says Mr. Merkaj, visibly upset.

Dona Tabaku, who works in tourism in the region, says the situation is critical. “The river is our life. The Vjosa is what makes this place so beautiful! The dams would destroy this unique nature.”

The Vjosa valley is also a valuable research area for science, says Marta Crivellaro, a PhD student from Italy. “The Vjosa is unique in Europe in its pristine nature, because almost all rivers have been altered. The Vjosa, on the other hand, is close to its original state. In a way, we can look back in time and draw conclusions about how rivers used to be in Western Europe.” 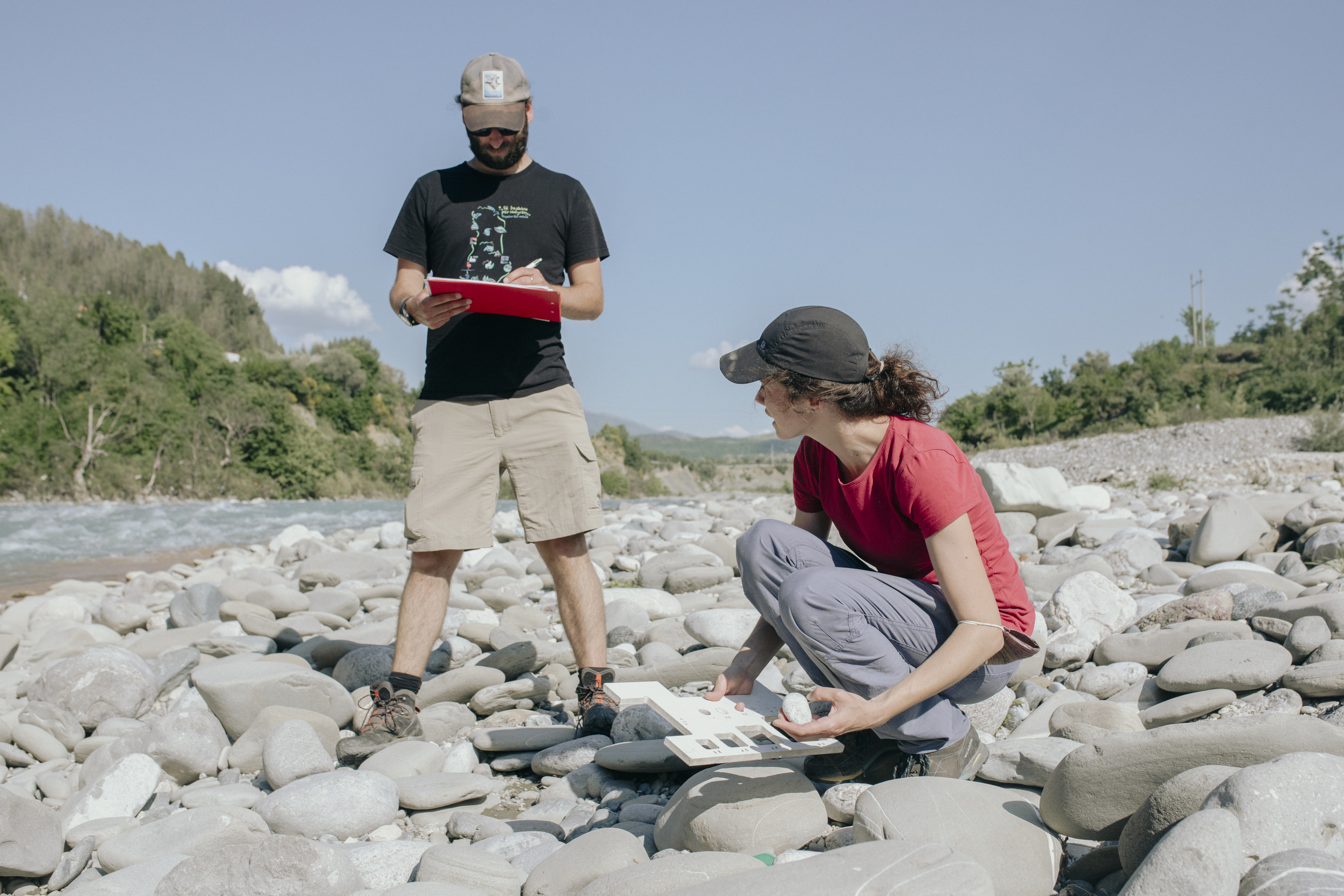 Biologist Philippe Theou and PhD Marta Crivellaro examine the size and form of rocks in the riverbed near Përmet, collecting data to further understand how rivers in Europe used to be. 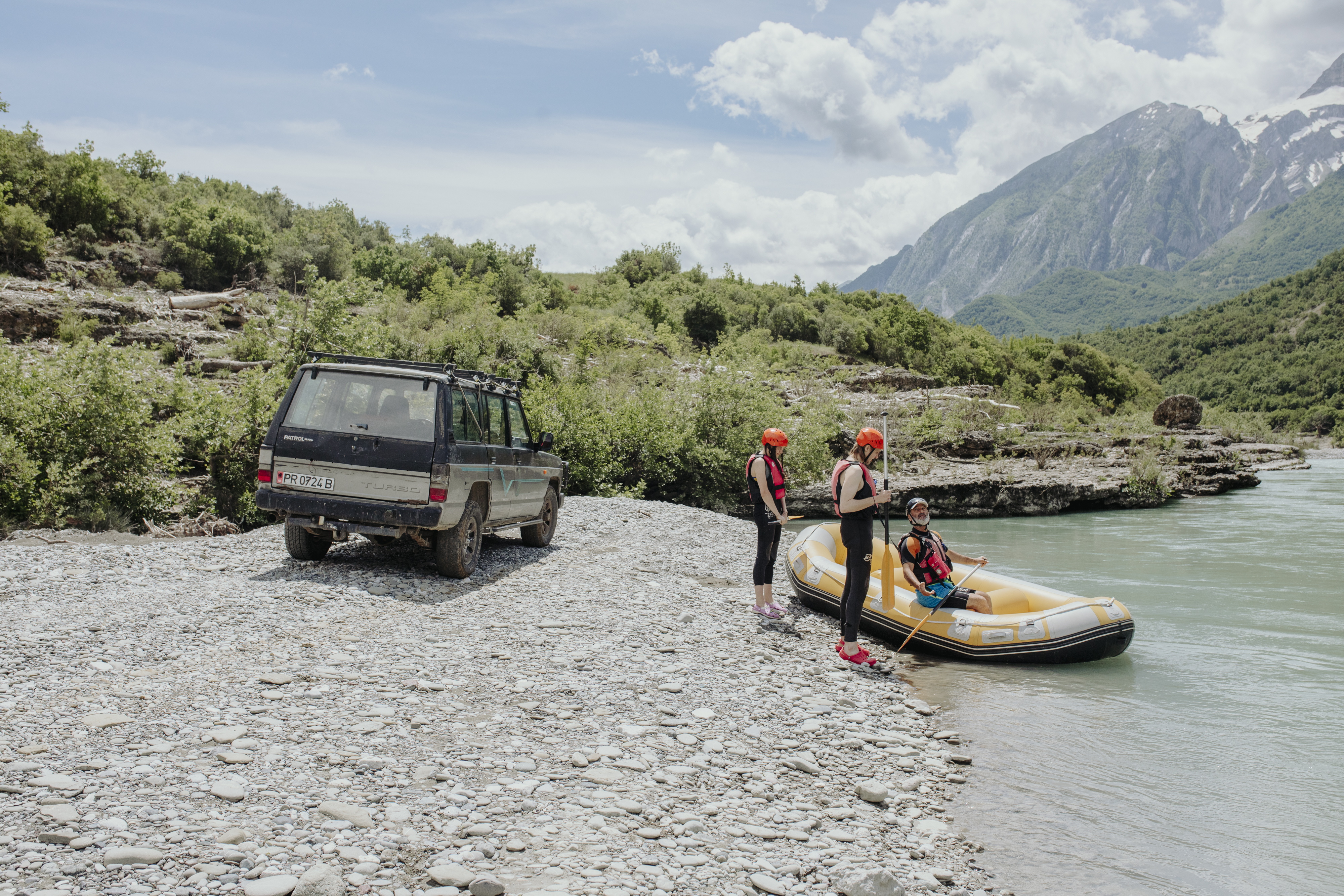 Robert Tabaku, a local hiking guide and rafting tour operator, prepares to guide tourists along the stream of the river. The Vjosa is still a well-kept secret, but more and more kayakers are visiting in summer.

The region was only recently discovered by tourists. And Ms. Tabaku’s livelihood depends on them. The 40-year-old runs an eco-campsite in Përmet, near the Greek border, together with her husband, Robert, and offers rafting tours on the wild rapids of the upper stream.

”For lovers of rafting and kayaking, the Vjosa is a paradise,” said Mr. Tabaku, 52.

There are many hiking and cycling trails in the mountains along the river, where one can discover the famous Albanian hospitality. The locals offer raki, a traditional liquor, as well as fresh home-made feta.

”We have invested a lot in building our campsite and promoting our tours” said Mr. Tabaku. All the efforts would have been for nothing if the river was dammed.”

The construction of the third hydro plant caused the hot springs on the lower end of the river to temporarily run dry in the beginning of October, 2014. As a result, dozens of people took to the streets in Tirana demanding a stop to construction. Over the past decade, protests against corruption and mismanagement by the government have roiled the country.

In response to the 2014 protest, Albania’s environment ministry promised to appoint a working group on the issue, but the plant was completed and the group was never established.

After a series of efforts to stop and restart the construction of a dam project near Kalivaç, the site now sits abandoned.

Another dam project, near Kalivaç, was started in 2007, but construction was halted because of accusations of fraud and money laundering. In 2017, the Albanian government reissued a contract to a new company from Turkey and the project was continued. However, owing to a lack of a sufficient environmental impact study, the construction was stopped again by an Albanian court in May, 2021. Today, the construction site lies abandoned and the river still flows in its natural bed. 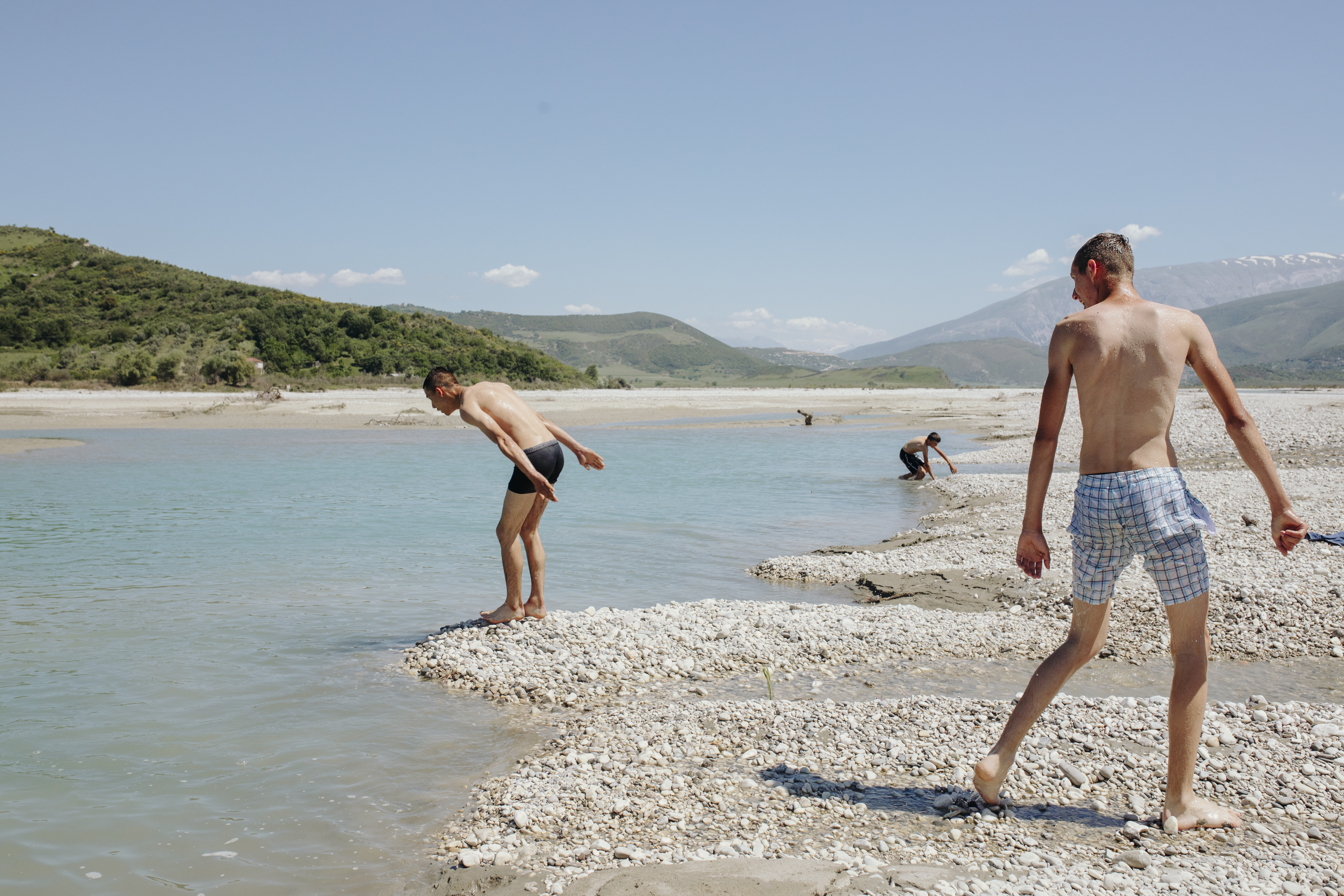 Claudio Zekaj (left) and Miri Merkaj often go swiming in the ponds close to Kutë, which are created when the free-flowing river changes its course 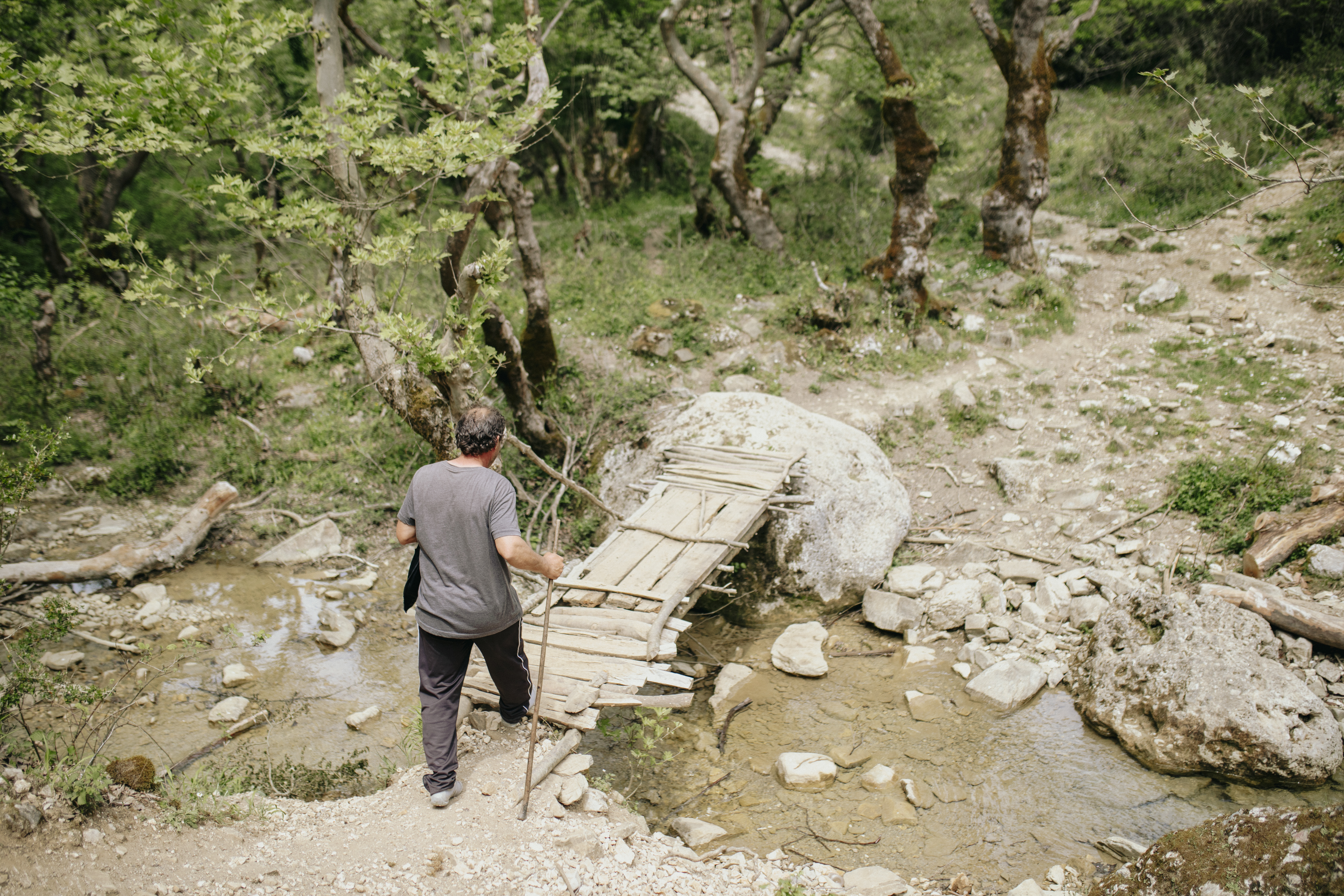 Shpetim Muka, owner of Bujtina Peshtan guest house, fears that hydropower plants along the river will drive tourists away from the region.

Now there is also international protest. Scientists and activists have been fighting for the protection of the Vjosa for years and are calling on the Albanian government to declare the Vjosa valley and delta a protected national park, to safeguard the river from further threats. The Albanian government plans to build an airport near the mouth of the Vjosa and Shell Oil started to survey the valley for oil reserves in recent months.

The international NGO Alliance, Save the Blue Heart of Europe, has organized protests in European cities in support of protecting the Vjosa and other rivers in the Balkans. Celebrities like Leonardo di Caprio are supporting the environmental campaign.

But the future of the Vjosa as a wild river remains uncertain.

Interested in more stories about climate change and exploration? Sign up for the Globe Climate newsletter and read more here