Officials in New Brunswick are urging patience while floodwaters are receding, saying there’s a long way to go before the response can become a recovery effort.

The province’s Emergency Measures Organization says that while water levels are slowly dropping along the Saint John River, communities from Fredericton to Saint John remain above flood stage.

Heavy rain caused the river level to rise slightly in Fredericton on Saturday night, but the forecast is for it to fall below flood stage by Thursday.

“The precipitation that we got has to work its way through the system. It’s a slow thing to get this much water out of the river basin, so we once again are asking people to be patient,” MacCallum said Sunday.

The Trans-Canada Highway remains closed between Oromocto and River Glade, forcing motorists travelling between Fredericton and Moncton to make a long detour through Saint John.

EMO spokesman Geoffrey Downey said while water levels are dropping, a lot of debris on the highway still has to be removed before it can reopen.

Ahmed Dassouki of the Department of Transportation and Infrastructure said there were 84 road closures across the province as of Sunday afternoon.

Even though water has begun to recede, he warned people against driving on flooded routes.

“They could be undermined, or there could be debris. You don’t know what’s down there,” he said.

MacCallum cautioned residents from trying to return to their homes or check on cottages too soon. He said it is still not safe to be on the water.

“We don’t want people putting themselves in harm’s way and compounding the problem by making a move too early.”

He said some homeowners may be worried about looting, but that has not been an issue.

“I want to reassure people that in those areas where people have evacuated — even if it is just the occasional homes — we are maintaining a security presence on boats throughout the day and night,” MacCallum said.

So far this year, 437 households comprising 1,095 individuals have registered for help with the Canadian Red Cross, and 487 of those people have been given accommodation in hotels. Other evacuees have opted to stay with family and friends.

Bill Lawlor, New Brunswick director of the Canadian Red Cross, said a fundraising effort was launched Friday, but he didn’t know how much was raised over the weekend. A similar effort last year raised $1.6 million.

“Each household, if they were evacuated, received $300 of emergency cash injection to help offset some of the expenses incurred through their displacement. In the second round, a smaller number of families received $975 that was more of a transition and returning back to your home,” he said.

Lawlor said in the third round, which is still underway, eligible households could received up to $50,000 to help repair and rebuild.

He said the third round has taken time to process because homeowners must first determine what they could get in disaster financial assistance and insurance.

Members of the military have been assisting with flood efforts in New Brunswick by helping to fill sandbags and provide access to flooded areas.

Defence Minister Harjit Sajjan is expected to tour some of the affected areas around Saint John on Monday.

‘Difficult’ days ahead, Quebec premier warns as dam bursts; while flood situation eases in parts of Ontario and N.B.
April 28, 2019 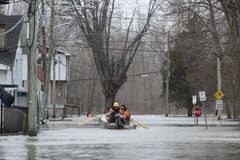 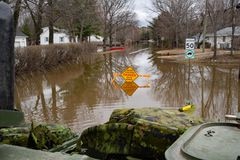 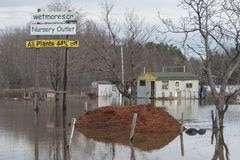