There was no fairy tale ending for a wayward humpback whale that captivated crowds in the Montreal area in recent days, as a whale research group announced Tuesday that the animal was reported dead.

The Group for Research and Education on Marine Mammals reported Tuesday morning that a boat pilot spotted the carcass of a whale in the water off Varennes, about 30 kilometres northeast of Montreal.

By midafternoon, under sunny blue skies, the whale could be seen slowly making the reverse journey east toward the ocean, this time under tow from a Fisheries and Oceans vessel.

Marie-Eve Muller, a spokeswoman for the whale research group, said that as of 3 p.m. experts were still doing the “complex logistical work” of figuring out where to safely bring the whale ashore for a necropsy.

She said that while several sites were possible, the final choice would be made based on currents, the whale’s position and discussions with possible site owners.

In addition to the possible dangers involved in manoeuvring such a large animal, Ms. Muller said it was important to ensure the site is far enough away from residential areas to ensure the carcass doesn’t become a “public-health hazard,” either to the smell or simply drawing a large crowd.

The young humpback was first spotted in the Montreal area at the end of May, several hundred kilometres from its usual habitat.

Over the next few days it drew crowds to the city’s Old Port, where it thrilled onlookers with spectacular breaches and tail slaps.

The whale had not been seen since the weekend, and many expressed hope that it had turned around and was heading back to its home range near Tadoussac.

Ms. Muller said it’s too early to hypothesize about how the whale died or even to confirm it’s the same one seen in Montreal, although she said it’s very likely.

She said the 9.5 metre-long whale was estimated to be between two and three years old and had appeared energetic.

Even in death, the whale drew a crowd.

In Contrecoeur and Sorel-Tracy, northeast of Montreal, onlookers could be seen gathering along the riverbank to catch a glimpse of the carcass as it was slowly towed up the river.

Monique Marchand, a resident of Contrecoeur, said the whale had provided people a little joy in a dark time.

“But we have to respect that there are things we can’t change,” she said as she wiped away tears.

“If it decided to come here, on some level it was a choice,” she said. Ms. Marchand expressed hope that the whale would inspire people to have more respect for nature, because “we don’t do enough,” she said.

It’s unclear what prompted the animal to make the long journey up the St. Lawrence River, although experts suggested it might have been following prey, become lost or was simply curious.

Her group had earlier said it was the first time it had confirmed a whale the size of a humpback in the Montreal area, although minke whales and belugas have been spotted on rare occasions.

Since news of the death broke, Ms. Muller said the research group has been fielding some angry calls from citizens who wished it had done more to intervene.

But while she understands the emotional response, she said options such as physically transporting the animal or trying to lure it with whale calls would likely not have been possible over such a long distance, and could have harmed the animal.

She said the whale’s best chance of survival had always been to let it find its own way home. 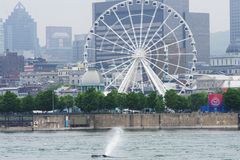 In a rarity, wandering humpback whale ends up in Montreal this weekend
Subscriber content
May 31, 2020 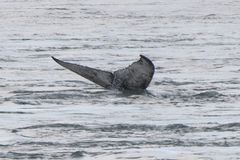