Every nine days, a young child dies after being left in a hot car in the U.S.; in Canada, on average, there is one such death every 90 days.

There have been at least 21 hot car deaths in the U.S. so far this year, and two in Canada – a three-year-old in Burlington, Ont., in May and a six-month-old in Montreal in June.

Every one of these heartbreaking deaths is preventable, according to the advocacy group Kids and Cars.

That point is driven home in a coroner’s report released this week in Quebec.

Coroner Denyse Langelier ruled that the death of 11-month-old Jacob Éthier-Magnan, whose father forgot to drop him off at daycare and left the baby in his car seat on a scorching day in August, 2017, was accidental.

The coroner stressed that simple and available technological tools could have prevented the tragedy, and she is not the first to make that observation.

Fifteen years earlier, when 23-month-old Audrey Dubé-Martin died in eerily similar circumstances – left in sweltering car by a father who forgot to do the daycare drop-off – the coroner in that case said that all vehicles should be equipped with alarms that prevent a child from being left alone in a car seat.

So what is Transport Canada waiting for to regulate?

Apparently it feels that, while there are several devices on the market, none is ideal. “Upon examination, it has been determined that no alarm is sufficiently effective to detect that children have been left unsupervised in a vehicle,” Transport Canada is quoted as saying in response to the coroner’s queries.

That sounds like a bureaucratic case of the quest for perfect being an enemy of embracing the good.

Automakers also seem reluctant to incorporate this type of warning system into their design. That’s surprising when you consider that cars have all sorts of built-in warnings: You can’t back up too close to another parked car, leave your keys in the ignition, a door ajar, or lights on without triggering some kind of irritating noise/reminder.

“Who’s decided that it’s more important to not have a dead car battery than a dead baby?” asks Janette Fennell, the founder of Kids and Cars.

Her point: The technology to prevent hot car deaths exists, but it’s just not a priority for manufacturers or regulators.

The coroner, Ms. Langelier, expressed similar frustration: “Personally, every time I turn off my car, I get a reminder to not forget my cellphone,” she told Radio-Canada. “Every time I hear that message, I think of that poor little baby.”

There are low-tech methods of preventing hot car deaths. One of the simplest is placing your cellphone in the baby’s car seat – because no one will go very long without noticing they have forgotten their phone. (That approach has the added advantage of preventing distracted driving.)

There are also apps, like Waze, that include a “child reminder” feature.

Many couples send each other text prompts as part of their daily routine: “Did you drop Zachary off at daycare?” Daycare centres should also have check-in systems where they contact parents if a child is not dropped off by a specific time.

Some cars can be programmed so there is a voice alarm when the car is shut off. GM has installed a rear-seat reminder in more than 20 models of its vehicles – a light that flashes the words “look in rear seat” on the instrument panel.

There are also car seats with a built-in receiver that can be synchronized with the vehicle’s on-board diagnostic system so an alarm is triggered if the child is left alone.

Of course, having all sorts of bells and whistles does not absolve parents or guardians of ultimate responsibility for children.

You don’t leave a child alone in a hot car – or in a bathtub, or alone near the pool, for that matter.

There is a risk that we become too dependent on technology or, worse yet, incorporate so many warnings into our routine that we develop alarm fatigue.

Let’s not forget that these kinds of tragedies happen because people are stressed, tired and overwhelmed, and that is bad for our health and the health of our children. Technology alone cannot fix that problem.

But the technological tools that can greatly reduce the risk of hot car deaths are an acknowledgment that people are human, and that means they can be forgetful – even temporarily forgetting the most precious thing in their lives. 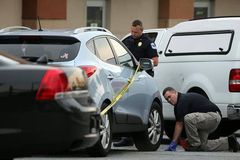 Police charge father of Ontario boy who died after being left in hot car
May 30, 2018
Follow André Picard on Twitter @picardonhealth
Report an error Editorial code of conduct
Due to technical reasons, we have temporarily removed commenting from our articles. We hope to have this fixed soon. Thank you for your patience. If you are looking to give feedback on our new site, please send it along to feedback@globeandmail.com. If you want to write a letter to the editor, please forward to letters@globeandmail.com.
Comments