Get ready for weather whiplash.

Many cities in the U.S. that felt the record-breaking bite of Arctic winter, and parts of Canada around the Great Lakes, will enjoy daytime temperatures well above the freezing point this weekend.

That extraordinary swing will leave out much of the Canadian Prairies next week, where daytime highs may not climb above -20 C. But for those on the undulating border between warm and cold air masses, the rapid change may prompt some to wonder whether this is what scientists mean when they say climate change will bring more weather extremes. And perhaps whether this the new normal.

The question has been recurring since the winter of 2013-2014 when a record cold wave ushered the term “polar vortex” into the common vernacular. The following year produced a similar pattern. This week’s news coverage largely echoes reports written then. The suggestion – and sometimes the assertion by reporters – is that the severe cold is a manifestation of global warming.

That apparent paradox is one that climate change deniers seize on to sow doubt about science. This week U.S. President Donald Trump quipped on Twitter that he wished global warming would come back.

So to be crystal clear, atmospheric scientists are not debating about whether climate change is happening. The evidence for climate change is overwhelming, and we should expect the planet to warm due to the continuing release of heat-trapping greenhouse gases.

“The underlying slow change in climate that’s driven by human activity is still there,” said Gregory Flato, a federal climate scientist and manager at the Canadian Centre for Climate Modelling and Analysis in Victoria. “The theory is not undermined by a cold winter.”

Nevertheless, when deep cold snaps take hold at middle latitudes, scientists are divided about what exactly is going on, because it’s tricky separating what may be normal variation from the extra kick that climate change is applying to the whole system.

The best indication of a climate change connection to severe cold in North America comes directly from observations. Residents of the U.S. Midwest and the Great Lakes region may have noticed that, including this past week, three of the last six winters have featured memorable cold snaps, sometimes interspersed with abrupt swings to warmer weather.

But six years is not enough time to tease out a genuine climate trend, said Paul Kushner, an atmospheric scientist at the University of Toronto. For most scientists, 30 years is a more typical minimum. Dr. Kushner said that some of his own lab’s research has failed to show a clear indication that cold snaps are becoming more frequent. In any case, such results often depend on how the data are analyzed.

For the past several years, Jennifer Francis, a climate scientist at Rutgers University, has advanced a compelling argument that the accelerated warming of the Arctic relative to the mid-latitudes has resulted in a wavier than average jet stream. Rather than flowing straight across the continent west-to-east, this fast-moving current of air high above the surface now tends to meander like a river across a flat plain. The result is that cold air swirling around the North Pole (the polar vortex) is less confined and can produce eddies that drift southward, bringing High Arctic conditions to mid-latitude cities.

One reason to harbour reservations is that computer models of the climate do not seem to reproduce the trend. That’s not to say the models don’t sometimes generate extreme cold. It’s just that they don’t show a clear link to climate change.

“If anything, they seem to suggest that a rapidly warming Arctic also leads to a warming of the mid-latitude continents,” said Judah Cohen, a Boston-based climatologist with Atmospheric and Environmental Research, a consultancy that specializes in weather risk assessment.

He added that efforts are needed to improve consistency between models to help reduce ambiguity.

Meanwhile, Dr. Kushner said that non-scientists should bear in mind that the link between climate change and the increasing risk of heat waves in the summer is far clearer and potentially lethal for those who are vulnerable.

But can we expect more frequent and severe cold snaps in the future? For now, science says: “Maybe.” 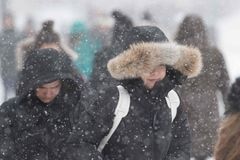