We had repeated demonstrations of that truism this week when the federal government and a handful of provinces released projections about how the COVID-19 epidemic is expected to play out in Canada.

The sombre revealing of numbers in Ottawa, Victoria, Edmonton, Regina, Toronto, Quebec City, Fredericton and St. John’s all had two things in common.

Politicians and public-health officials in every jurisdiction stressed repeatedly that the differences between the best-case and worst-case scenarios depend largely on how well the public embraces the admonitions to isolate at home (even during the holidays) and to practise physical distancing when out and about.

The second thing all the projections had in common is that they had little in common.

Other provinces opted to not forecast deaths, focusing instead on how the epidemic could affect hospitals. B.C. estimated it could be short anywhere between 133 and 341 intensive-care beds, depending on whether the epidemic follows the pattern of Hubei province in China or northern Italy. But officials expressed confidence that the spread is slowing and the hospital system should be able to handle the most likely scenario. Newfoundland said if its current pattern continues, it will run out of ICU capacity by the end of June. These kinds of data are probably the most useful as provinces prepare for the days and weeks ahead.

The numbers that will make the headlines, however, are the most dubious ones: the longer-term projections.

Federal officials said Canada will likely see somewhere between 11,000 and 22,000 COVID-19 deaths. That’s grim, but they stressed that, had provinces not implemented shutdowns and rules on public interactions, the death toll could have risen as high as 300,000.

Some of those ranges are so vast as to be largely meaningless. Quebec didn’t release a long-term forecast because, in the words of its director of public health, Dr. Horacio Arruda, forecasting beyond April 30 is tantamount to practising astrology.

Models are only as good as the data you pump into them, and the data we have are not great. We know how many confirmed cases and deaths there are, but we don’t know the “attack rate,” the proportion of people who will become infected and fall ill.

The message being hammered home is that physical distancing matters, that the less people interact the smaller the likelihood of coronavirus spreading.

We know lockdowns have worked in other countries, but we really don’t have any idea how many Canadians are actually heeding the “stay at home” calls other than some polling data that suggest one in four are not practising distancing.

Is a 75-per-cent buy-in good enough to flatten the curve? Or does it have to be 90 per cent? What happens if it falls to 50 per cent?

Ultimately, the goal of public-health measures is to slow the spread of coronavirus. The way to do that is for those who are infected to infect as few others as possible, known technically as reproduction number, R0 (pronounced R-naught).

Prior to measures such as border controls and physical distancing, the R0 was about 2.2, meaning each person with a confirmed case of coronavirus infected 2.2 others on average. Now it’s roughly 1.5.

But to slow the spread, you have to bring the R0 below 1.0. We also have to hit a peak before numbers will come down. Quebec predicts its peak will come within the next two weeks; Alberta, mid-May; Newfoundland, between September and November.

All that uncertainty makes modelling difficult, and predictions even more so.

Dr. Theresa Tam, Canada’s Chief Public Health Officer, cautioned that “models are not crystal balls. They don’t tell us what will happen, but what could happen.”

That’s frustrating but, in this time of great uncertainty, having imperfect forecasts feels a little better than having no forecasts. 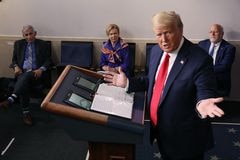 Coronavirus Update: Return to work will be graduated and likely months off, Trudeau says
April 8, 2020 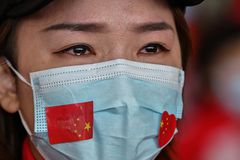 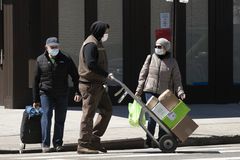