“There’s absolute consensus that we want to get back as quickly as possible to whatever normal will be, but we also expect the federal government to be leading on that question,” B.C. Premier John Horgan said Tuesday.

“Come Thursday we expect the federal government to have a plan, and then we’ll work on building consensus around that.”

Mr. Horgan’s comments came after the leaders of Canada’s four western provinces and three territories wrapped up an online conference. They discussed issues of shared concern, ranging from post-COVID-19 recovery to next steps and healing around residential schools.

Mr. Trudeau has called premiers to a meeting Thursday to discuss reopening borders amid concerns Canada is lagging behind other countries on resuming travel.

Alberta Premier Jason Kenney said his province aims to lift its advisory against non-essential interprovincial travel in early July, but a cautious international plan is needed.

“We should facilitate a safe reopening of the U.S. border as soon as we reasonably can. I’d like to see that happen early in July,” Mr. Kenney said.

“This is massively holding back our economy. What we see in the United States is that COVID does not pose a significant public health threat.”

“We need to have a targeted approach to this. I think we all agree that there are some parts of the world that are further advanced than others in terms of vaccinations,” Mr. Horgan said.

“I want to see a clear plan from the federal government on how they’re going to monitor who’s coming, how they’re coming, by air, by land, by sea.”

“It may be a phased-in approach that involves a test I don’t know,” Mr. Moe said.

“It is important not only for families to meet families. I have friends that are thinking about how they will be able to reunite with their family in India, for example.”

Mr. Moe said it’s also about getting the economy back firing on all cylinders: “We do deal, in Saskatchewan, with over 160 countries each and every year.”

He stressed that restrictions will be phased out slowly, and will be tied to rising vaccination rates and falling COVID-19 caseloads.

Business leaders have also called on Ottawa for a clear path to reopen the economy and international borders.

Perrin Beatty, head of the Canadian Chamber of Commerce, said Canada is a G7 outlier for not having a fleshed-out reopening plan.

The western leaders also renewed their call to the federal government to strengthen their health funding partnership with sustainable long-term funding through Canada Health Transfers.

“As we find our way out of the third wave, COVID has shown us the limitations of our health care system,” said Nunavut Premier Joe Savikataaq, host of the one-day meeting.

The leaders also discussed next steps on residential schools given the recent discovery of what are believed to be the remains of 215 children at a former school site in Kamloops. They agreed that next steps on finding other remains or helping survivors heal will be done but at the direction of Indigenous leaders. 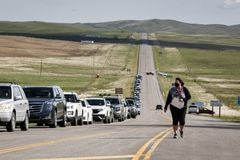 B.C. aiming to lift all COVID-19 public-health restrictions by September in four-stage reopening plan
May 26, 2021 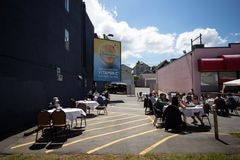