Last summer, Brent Woodside left Prince Edward Island to teach middle school math and science in Lund, Sweden. By springtime, the Canadian was one of a dwindling number of educators in the world still teaching in a classroom.

Sweden, unlike other Scandinavian countries, did not enforce a widespread lockdown for the COVID-19 pandemic. Instead, it implored its citizens to practice physical distancing and encouraged some to work from home. While high schools and universities closed, schools for younger children stayed open. For Mr. Woodside, that meant in-person classes continued.

The 27-year-old from O’Leary, PEI, felt uneasy at first sharing a room at his school, IES Hassleholm, with 30 preteens. Field trips and large staff meetings are cancelled, but gym classes and recess continue to take place, students still eat lunch together, and indoor gatherings of up to 50 are allowed.

Once a few weeks passed without an outbreak at his school, Mr. Woodside felt he could relax. “COVID has been way less disruptive here than it would have been back home,” he said. “Life here never really stopped being status quo.”

For months, Sweden has been under the microscope for its liberal public health measures, such as keeping restaurants, bars, fitness facilities and national borders open. The country now has 409 deaths per million residents, just behind Britain, Italy and France and dwarfing Finland’s 56 and Norway’s 43 per million. The country’s Public Health Agency reported in late April that three quarters of Stockholm’s 101 nursing homes have now experienced coronavirus outbreaks.

Little is known, however, about how COVID-19 has affected primary schools; Swedish officials have not tracked viral spread among schoolchildren. Infectious-disease experts at Sweden’s Karolinska Institute, a medical university, had worked to develop a protocol to study outbreaks at schools, but it was not used due to lack of funding, time and previous experience with pandemic research.

While no official tracking of COVID-19 cases was done, several media have reported that at least three staff in Swedish schools have died from exposure to the virus. Swedish newspaper Läraren said that at least two teachers had died and one in four staff members (18 out of 76) tested positive for COVID-19 at a school in the town of Skelleftea. Helsingin Sanomat, a Finnish publication, reported that an IT support staff died from a school in Nacka, near Stockholm.

British Columbia is reopening its schools next week after suspending in-class teaching for most students in March; an education ministry spokesperson said that the province has looked at data from Finland, Denmark and New Zealand for guidance. These countries reopened their schools in late April and early May.

In B.C., classroom instruction will be offered on a part-time, voluntary basis for the final month of the school year. Quebec reopened elementary schools outside Montreal earlier in May. Other provinces are not planning to reopen schools until September.

In mid-March in Sweden, as COVID-19 cases multiplied in Europe, students were given the option to learn from home to reduce their chance of catching the virus. Teachers were asked to prepare both virtual and in-person classes. But in-person classes became mandatory again after four weeks to reduce strain on teachers.

Mr. Woodside and his co-worker Patrick Marlow, a first-year teacher from Antigonish, N.S., both said preparing two lessons per day – for online and in-person – has so far been the most stressful part of teaching during a pandemic. Neither felt they are in danger at school. While Sweden’s death per million rate is high and nursing homes have been hit especially hard, the teachers have not yet seen a COVID-19 outbreak at their school, located in a city of about 90,000. Mr. Marlow credits students and colleagues, who he said practice steadfast physical distancing.

“Sweden’s Prime Minister said we could expect thousands of deaths,” Mr. Marlow said, “and that not entering lockdown came with a huge responsibility to be cautious in how we live. People took that seriously – there is a lot of trust in the government here.”

Mr. Marlow said he also feels little danger of catching the virus outside of school, because physical distancing appears inherent to Scandinavian culture.

“Unlike at home, it’s normal here to keep to yourself and not talk to strangers,” he said. “There is a designated quiet zone in the trains and we Canadians joke: how much quieter could it possibly be than everywhere else on the train?”

Grade 5 and 6 teacher Anna MacDonald feels safe in the classroom even in Stockholm, Sweden’s largest city of 1.5 million. Also a native of Antigonish, she said that simple measures like occasional virtual classes, enforcing outdoor lunches, and limiting play groups to a maximum of three students is proving effective in preventing outbreaks at her school. She said it is sometimes easy to forget about the global health crisis.

“I don’t go out as much as usual,” she said, “but the rest feels a lot like normal life. For the most part I feel safe here.”

Ms. MacDonald said that her parents, who are both teachers from Antigonish, worry and check in frequently on her and her brother, who is in Italy on a high school exchange. But hearing from them about the challenges of teaching in lockdown made her feel fortunate to live overseas.

“So far going to Sweden has ended up being a great experience for me,” she said. “If I could do it all again, pandemic or not, I would still come here.”

Swedish epidemiologist Anders Tegnell the target of praise, criticism over handling of COVID-19 pandemic
May 1, 2020 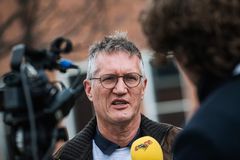 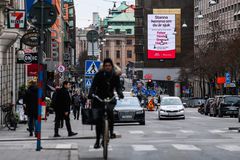