Quebeckers have swept into power an untested political party for the first time in four decades, a changing of the guard with potentially profound implications for the province’s state corporations ahead of an expected slowdown in the economy.

The Coalition Avenir Québec (CAQ), an almost seven-year-old party led by former Air Transat founder François Legault, took power with a majority of seats Monday. It was the first time that a party with no history of governing has been elected since 1976, when René Lévesque’s Parti Québécois beat a Liberal party beset by scandal.

The result is a remarkable setback for Philippe Couillard’s Liberal Party, which failed to parlay a prosperous economy, record-low unemployment and healthy public finances into electoral success. Mr. Legault will step into the game with Quebec well down the field toward greater prosperity thanks to big Liberal moves, including paying down debt and making highly unpopular cuts to social services, which restored budget balance while bolstering the province’s ability to deal with an economic downturn.

Opinion: CAQ victory is an indictment of the province’s political establishment

“The new government will take the reins of the province in a very enviable situation,” said Sébastien Lavoie, chief economist for Laurentian Bank in Montreal. “Back in 2014, credit agencies were putting pressure on the province, and economic growth was sluggish. Now, it’s as good as it gets in terms of economic momentum. The house is in order.”

Mr. Legault spoke to a business audience at the Chamber of Commerce of Metropolitan Montreal on Friday, vaunting the CAQ’s bench strength. He said the party’s candidates form the biggest team of entrepreneurs and business people ever seen in Quebec politics. “We have a team that’s impatient to do better for Quebeckers,” he said to two standing ovations.

Among his key priorities is beefing up the power and responsibility of Investissement Québec (IQ), the province’s investment arm. The CAQ wants to give it a new mandate and the means to attract significantly more foreign capital and encourage more private investment. He says Quebec should be winning $60-billion worth of non-residential private investment every year, double the current level.

Another big CAQ priority is helping Hydro-Québec make a bigger push into neighbouring provinces and states. The utility boosted exports 31 per cent from 2014 to 2017, to 34.9 Terawatt hours, but Mr. Legault thinks there’s a much greater opportunity.

“The biggest contribution Quebec could make to save the planet, to reduce greenhouse gases, is to replace the United States' coal-fired plants and gas-fired plants by hydroelectricity,” he said. “Quebec can contribute to fighting climate change at the same time as increasing its own wealth.”

There had been minimal change in Quebec credit spreads versus those of Ontario in the lead-up to Monday’s vote, signalling that investors weren’t bothered by the prospect of a government led by either the CAQ or the Liberals. The spreads, which indicate the risk premium for owning one province’s debt over another’s, have often been wild in and around Quebec elections, National Bank of Canada said in an analysis published when the campaign began on Aug. 23.

“This time could well be different,” National Bank’s Warren Lovely said. “We see the CAQ as advocating a fiscally conservative, pro-business vision – a plan that, on its face, might not look or sound all that dissimilar from what the Liberals have delivered over the past four-plus years.”

Mr. Legault, an accountant by training, wooed voters with the premise that things are still not nearly as good as they could be. He pledged to lead the province to its true economic potential and catch up to neighbouring jurisdictions on metrics such as disposable income. Eric Girard, Mr. Legault’s possible pick for finance minister, said he believes Quebec can wean itself off equalization payments within 15 years.

The road to get there could be challenging. To some extent, the outgoing government benefited from an economy that defied expectations for growth, with one of the longest expansions on record. Now, however, with interest rates rising and many Quebec companies struggling to find workers, economists are bracing for a slowdown. 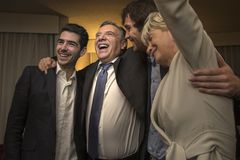