For most of us reading this newspaper (or writing for it), those things are unimaginable. Or at least better left unimagined; who needs more nightmares? But we’d better look, because these are the stories of the people abandoned in Ontario when the Progressive Conservative government decided, this week, to cancel the previous government’s three-year basic-income project. In doing so, it is stranding some 4,000 people across the province who had dared to think about the future instead of worrying about how to eat tomorrow.

We’re not talking about a cash windfall here. The people in this program were not choosing which colour of Birkin bag they’d prefer or where they could moor their yachts. The basic income was, in fact, a tiny amount when you consider how much it costs to live in even a medium-sized city in Ontario: Single people got almost $17,000 annually and couples about $24,000, less 50 per cent of income earned at a job (disabled people got $6,000 more).

But even that small amount was stable income, and enough to allow people on the program to begin to plan for the future. Their stories, gathered by local news outlets like the Hamilton Spectator and the Lindsay Advocate, outline those tentative first steps toward a better life. Enrolling a child in college; buying a car; taking exercise classes; signing a lease on an apartment.

These are all things that would probably have, in the long run, made them less dependent on government income, which I thought was a conservative ideal. Now, those families’ plans are crushed, thanks to a government composed of people who have never had to worry where their next $20 is coming from. I would be willing to bet Premier Doug Ford, son of a provincial politician, brother of a Toronto mayor, lifelong employee of the family label-making business, and long-time railer against “elites,” has never had to worry about affording a new winter coat.

If you think I’m exaggerating about Canadians worrying about their next meal, consider the recent Angus Reid Institute report on poverty in Canada, which showed that one-quarter of us have had to borrow money for groceries or transportation. Forty per cent cannot afford dental care. Twenty-seven per cent of respondents are living with “notable financial hardship.”

We recognize signs of increasing wealth disparity and yet are trapped in old ways of thinking about prosperity and poverty, and who “deserves” each. The Angus Reid report offers a fascinating glimpse into Canadians’ attitudes about poverty. In short, we see it in our communities, and we think it’s getting worse but differ on whose fault that is, and how to fix it.

“Canadians perceive economic hardship everywhere,” the report says. “They see poverty as more commonplace than government statistics would suggest; they see it getting worse, not better, and they believe something needs to be done about all but the most minor economic struggles being experienced where they live.”

Some 64 per cent of Canadians don’t think that the federal and provincial governments are doing enough to alleviate financial hardship, although support for that notion dips among certain groups. If you said that group was rich people, please reward yourself with an expensive organic apple. “Some people – particularly those with high household incomes and those who voted for the Conservatives in the 2015 federal election – are more likely than comparable groups to say that governments are doing too much.” If you’re trying to understand why the provincial Conservatives cancelled the basic-income pilot so abruptly and callously, before it could even offer useful data for research, this statement is a good place to start.

Perhaps human psychology persuades those born to wealth that their good fortune is the result of centuries of hard work and forebears who lost their noses from proximity to the grindstone. Likewise, we’ve been trained to see the working poor as the legitimate inheritors of their misfortune. They just didn’t try hard enough or work hard enough (even if they live in a city such as Hamilton, where they’d need to earn $18 an hour, well above minimum wage, to afford the average rent).

“When you’re encouraging people to accept money without strings attached, it really doesn’t send a message that our ministry and our government wants to send,” said Lisa MacLeod, Ontario’s Social Services Minister, after announcing that the government was reneging on a campaign pledge to keep the basic-income project going.

I’m sorry, who benefits from government largesse? Is it the 4,000 people who might now buy strawberries out of season, heaven forbid, or is it a rather larger, better-dressed and more influential group of Canadians, a group less likely to be identified as welfare bums?

The same week that the basic income project was scuttled, a new report outlined how wealth is increasingly concentrated in the hands of a few Canadians, how those fortunes are amassed over generations, and how the country’s tax system helps protect and enlarge those fortunes.

According to Born to Win, a report from the Canadian Centre for Policy Alternatives, “Canada’s wealthiest 87 families now have 4,448 times more wealth than the average Canadian family, and they collectively own the same amount as the lowest-earning 12 million Canadians.” The average net worth of Canada’s wealthiest families rose by 37 per cent from 2012 to 2016, to $3-billion, the report says. (Middle-class families’ wealth rose by 16 per cent in the same time period.)

At least part of this is due to generosity from the public purse. “In general, Canada’s tax system is set up to encourage concentration of wealth at the very top,” the report says. That includes a lack of tax on inheritances, low taxes on capital gains and an acceptance of tax-avoiding loopholes.

These too are government handouts; we’re just trained not to think of them that way.

Opinion
From the comments: Readers get heated over Ontario PC’s move to cancel basic-income project
August 2, 2018 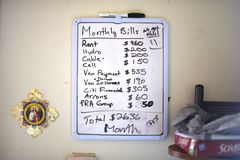 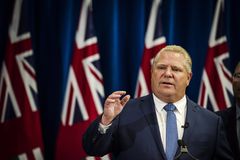