For anyone who has ever wondered why math is such a big deal, the coming weeks are about to offer a memorable lesson.

Put aside the microbiology, the biochemistry and the genetics. At a practical level, how the coronavirus pandemic is being experienced by different countries and how it’s likely to unfold in Canada comes down to the slope of a curve.

As events this week made clear, the feasibility of containing the outbreak within China and a few regional hot spots is over. While officials at the World Health Organization stress that containment measures – such as contact tracing and isolation of infected individuals – remain critically important, the question now for places where the virus is still ramping up is how to blunt the impact of the approaching wave.

It’s called “flattening the curve,” a term popularized this week by Anthony Fauci, head of the U.S. National Institute of Allergies and Infectious Disease. Instead of exclusively focusing on preventing infections, like plugging holes in a dike, authorities are shifting to a strategy of delay. Their objective is to keep the rate of new cases – especially serious ones – from rising too steeply, so that the epidemic doesn’t completely overwhelm finite resources and force hard choices about who should be prioritized for care.

“Our message to countries continues to be: you must take a comprehensive approach,“ said World Health Organization director-general Tedros Adhanom Ghebreyesus on Friday. “Even if you cannot stop transmission, you can slow it down and save lives.”

Already, the story of COVID-19 offers some striking contrasts. They are emerging in places where the outbreak has begun to level off and where it’s just peaking now. If there’s one key takeaway, it’s that the same pathogen with the same basic characteristics can lead to very different outcomes.

Some of that is almost certainly about demographics. For example, Italy, with its aging population, has suffered a fatality rate of around 6 per cent – far higher than most other countries. But another big factor is whether governments are getting ahead of the pandemic. The difference between what happened in Wuhan province, where local officials initially refused to acknowledge the threat, and the rest of China, where there was time to react, is a case in point. As the virus goes global, the trajectory of the pandemic will also depend on the degree to which communities and individuals will get on board with health measures that most of us have never seen at a population-wide scale.

Here, the math is unforgiving. Because this coronavirus is a newcomer to our species, virtually no one has immunity, though many will experience it as a relatively mild illness.

Studies based on the initial outbreak and isolated pockets, such as the Diamond Princess cruise ship, show that each case of COVID-19 can spawn, on average, an additional two to 2.5 cases. But that’s a statistical measure influenced by a host of variables. Epidemiology suggests that many who are infected won’t pass the virus on to anyone, while a few will spread it widely based on physiology and social context. In practice, this is why the fraction of people who will ultimately be infected is so hard to predict.

But whether that fraction ultimately turns out to be one-third or two-thirds or something else is not the most important number right now. What matters now is how fast the cases occur and what countries are doing to stretch out the pandemic’s rise so that it becomes an extended but manageable incline, and not a looming spire of disease.

Where ‘the curve’ is around the world

The charts below show the number of confirmed and recovered cases by country, as measured by national health authorities and compiled by the Center for Systems Science at Johns Hopkins University. If a country’s first case is within the time period shown, it is marked with a dotted line and the date. Pay close attention to the vertical axis on each chart: the number of cases varies dramatically from country to country, so not all charts are on the same scale.

China, specifically the city of Wuhan, is where COVID-19 originated last December. Local authorities in Hubei province at first played down reports of the virus, but by late January, as more cases were reported in China and overseas, authorities put Wuhan and other nearby cities under travel lockdowns and delayed the Lunar New Year holiday to slow down travel nationwide. Work-from-home policies and an aggressive public-health response brought China’s curve to the flat plateau shown below: still a higher number of infections than anywhere else, but fewer new ones as time goes on.

Until COVID-19 reached Europe (more on that later), South Korea was one of the largest centres of reported infections outside China. One possible reason for this is that it tested for the virus earlier, and more widely, than almost any other country. By mid-March, South Korea had conducted more than 230,000 tests, free of charge, including at drive-through facilities.

Anxious to avoid a repeat of the 2003 SARS epidemic, jurisdictions that could easily sever travel links to the Chinese mainland – such as Singapore, Hong Kong and Taiwan – acted fast to restrict travel by the beginning of February. Singaporean health authorities were also vigilant in testing lots of people with coronavirus- or influenza-like symptoms, even mild ones. As in South Korea, testing was free.

Italy’s prevention measures got off to a late start in February, when health workers in Lombardy failed to catch a super-carrier, dubbed Patient No. 1, who visited a hospital several times before being tested and isolated. The disease spread fast through northern Italy before the national government started incrementally tougher lockdowns on travel and public assembly, first in the north, then nationwide. Each step came after alarming rises in infections over the preceding 24 hours, hence the steeply rising curve. Other European countries that traced their infections back to Italy show similar curves, but lower numbers, and only a handful of deaths compared with more than 800 in Italy.

Iran’s curve is likely much different from the official numbers show, because Iranian officials are suspected of lowballing the infection toll in February to hide the scale of the country’s epidemic. Canadian health officials began to deduce that when they saw more cases linked to Iranian travel than the official numbers would support.

Though the U.S. numbers are still lower than Italy’s, its curve is essentially similar. U.S. authorities have come under criticism for performing far fewer tests per capita than other developed countries and for President Donald Trump’s repeated suggestions that the risk is greater abroad than at home. His focus has been on travel restrictions on affected regions (first China, then 26 European countries, excluding Britain).

Canada’s numbers were fairly stable through February, when the disease was more limited to Asia, but it has reached more provinces and cities since the beginning of March. Some provincial governments responded by banning indoor public gatherings of more than 250 people and by urging Canadians not to travel abroad.

When a virus strikes, the world needs an outbreak of good leadership
March 20, 2020 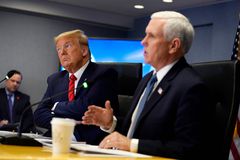