A judge struck down the Ontario government’s law reducing the size of Toronto City Council, and now Premier Doug Ford says he will invoke Section 33 of the Charter of Rights and Freedoms, known as the notwithstanding clause. The Globe’s Justice Writer Sean Fine explains the ins and outs of the controversial, seldom-used clause.

Why does the Charter of Rights have a notwithstanding or opt-out clause?

The clause reflects fears that judges would overrule the popular will, using their new power under the Charter to strike down laws based on their content. Three Western premiers proposed the clause at a First Ministers Conference in 1981 so legislators could have the last word. “We needed to have the supremacy of the legislature over the courts,” Alberta Premier Peter Lougheed said, citing the experience of the United States, in which courts had struck down legislation limiting work hours and the use of child workers. Mr. Lougheed was one of two Progressive Conservative premiers (the other was Sterling Lyon of Manitoba) who joined with a New Democrat (Allan Blakeney of Saskatchewan) to propose the clause. So it was a compromise between political power and judicial power – a kind of “safety valve,” as the justice minister of the day, Jean Chrétien, viewed it.

How often has the clause been used?

Outside of Quebec, it’s been rarely used. Quebec invoked it in every law it passed between 1982 and 1985, after it chose not to sign on to the Charter. It used it again in 1988 to protect a language law related to commercial signs. Uses (or attempted uses) have also occurred in Yukon, Saskatchewan (twice) and Alberta. Alberta tried to use it in 2000 in defining marriage as exclusively between a man and a woman. (The definition of marriage is federal, so the use of the clause had no legal effect.) Yukon passed a law (but didn’t proclaim it in force) allowing the Council of Yukon Indians to appoint persons to various boards, notwithstanding the Charter’s equality clause. Saskatchewan used it to protect back-to-work legislation in 1986. It announced last year it would use the override clause to defy a court order that said the government could not fund non-Catholic students to attend Catholic schools.

Why don’t legislators take the opportunity more often to have the last word?

It's partly because the clause has a built-in restraint: The opting out lapses after five years, unless renewed. That means that, roughly every election cycle, a government that wished to renew it would revive the public controversy over whatever law was at issue. But a bigger reason is that the Charter of Rights has become widely popular. Even if some decisions are highly controversial, the prevailing notion has been that using the opt-out clause is disrespectful toward the Charter itself. And there are alternatives, such as rewriting the law to take into account a court’s objections.

Conservative Prime Minister Stephen Harper was no fan of judges striking down legislation. Didn’t he ever use it?

No. The Supreme Court struck down some important pieces of crime legislation, but he did not defy the Supreme Court by using it. (“Defy” was a word used by Premier Lougheed in describing the power given to governments in the notwithstanding clause.)

Is there any way to challenge the Ontario government’s use of the notwithstanding clause?

Yes. It could be challenged in court. University of Toronto law professor Lorraine Weinrib says this use of it appears not to be legally valid, because it is retrospective – that is, it applies to events that have already occurred. The use of the override section needs to be “prospective," to affect future events, the Supreme Court said in a 1988 case.

Apart from that legal issue, how controversial is this particular use of the opt-out?

Here are a couple of ways to look at it. First, the opt-out clause does not apply to every right in the Charter. It doesn’t apply, for instance, to the right to vote, protected by Section 3. And in this case, the judge said the right to free speech in an election could be understood only in light of the right to vote. So while the clause technically applies, it may fall outside the spirit of the Charter. A second way to look at it is supplied by University of Toronto law professor David Schneiderman, who has written that the opt out should not be used when the rights of a vulnerable minority are stake, but that it is acceptable when judges are “so out of step with important socio-economic policy as to obstruct social change through law.”

Justice Edward Belobaba said in his ruling that Ontario "clearly crossed the line." How did they cross the line - and what line was it?

The line crossed was the right to free-speech, protected by Section 2(b) of the Canadian Charter of Rights and Freedoms. Changing the rules in the middle of the game was not just unfair, Justice Belobaba said. It was an unconstitutional limit on the free speech of voters and candidates. For candidates, it was the suddenness of the change. For voters, it was the very substance of the change that crossed the line.

How did the smaller council affect the candidates’ free speech?

The campaign started on May 1. Candidates based their decisions on where to run, what to say and how to spend money on the 47-ward structure, the judge said. The new rules took effect Aug. 14. The candidates’ expression of their political messages was “severely frustrated and disrupted.” Justice Belobaba found this an easy one. “How could it not” limit free speech, he commented. If the change had been made six months before an election, it would not have harmed candidates’ free speech, he added.

Was it really that simple?

The judge adds in a small, complicating factor: electoral fairness. That, he says, is a fundamental value of democracy, “flowing from the political equality of citizens.” And if candidates don’t have a reasonable chance to present their positions, then an election is unfair and inequitable.

What did he say about voters’ free speech?

So he didn’t think much of the 25-member council as a policy move?

Not on the evidence presented to him. He cited a review overseen by the city, which found that Toronto’s previous 44-member council should be increased to 47 and that members were already having trouble responding effectively to their constituents’ grievances with 61,000 people on average in their wards. He also cited testimony from a professor that ward sizes of 110,000 (in a 25-ward system) do not allow for effective representation.

But isn’t the province in charge? Couldn’t it abolish the municipal council if it wished?

Perhaps, in a legal sense, it could (the judge says the ruling does not “constitutionalize” a third level of government, thus leaving it open to a provincial government to change or abolish it). But having provided for a vote, the province needs to ensure that the vote complies with the Constitution, especially the free-speech section.

Did the government have a chance to justify the changes as reasonable limits on free speech?

Yes, but it didn’t get very far. The Charter’s very first section allows government to put reasonable limits on rights, if it can justify them. In this rushed case, the government said it had time only to provide a news release and transcripts of the debates from Queen’s Park. It did not even manage to clear the first hurdle judges use when analyzing whether a limit is reasonable: Did the government have an important purpose? It didn't, said Justice Belobaba, ruling that the change was done "more out of pique than principle." He said there was no evidence of urgency and no evidence of dysfunctionality at city council beyond the anecdotal, as when Premier Doug Ford, a former city councillor, said that members would spend 10 hours debating whether to get “Mrs. Jones’s cat” off a roof. (The government said in its new release that its purpose was improving efficiency and saving money.) 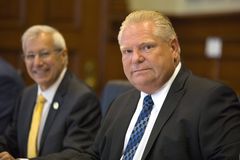 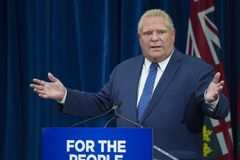