So it wasn’t much surprise this week when they seized on the slightest chance to compare Doug Ford with Donald Trump – Ms. Wynne delivering an overwrought statement to the effect that a comment by the Progressive Conservative Leader about how more Liberals would be in jail for their accounting practices if they were in the private sector rather than government, was tantamount to Mr. Trump’s campaign taunt: “Lock her up.”

What was surprising was that, knowing the Liberals’ desperation as well as anyone, Mr. Ford gave them the opportunity.

Per members of Mr. Ford’s campaign team, he is supposed to be playing it safe in this spring’s election. He has little need to persuade Ontarians of the need to get rid of their unpopular government, and will not be mistaken for the status quo; his imperative is to avoid giving voters too much reason to think twice by playing into fears of radicalism, mean-spiritedness or unsuitability for office.

So why would Mr. Ford hijack his own announcement on Tuesday of plans to audit the province’s books if the Tories are elected, which should have fit neatly into the play-it-safe strategy, by implying his opponents are criminals? Why allow days of headlines featuring both his name and Mr. Trump’s, when one of his most obvious risks is being seen as a northern version of a U.S. president even many PC supporters can’t stand?

The answer, based on the way Mr. Ford’s campaign seems to be functioning, is that it’s one thing to know what your strategy should be, and another to have the right personalities and circumstances to implement it.

The circumstances would be challenging for anyone. Most leaders have years to prepare for their first election; Mr. Ford had three months between getting the job and June 7. Not enough time to develop airtight messaging.

Then there are the people overseeing that messaging – germane in this case because the Liberals-in-jail line was in a press release accompanying Mr. Ford’s announcement, meaning it was not off the cuff.

Some backroom veterans would step in and run the safest, most conventional campaign possible. Mr. Ford is not surrounded by them.

His top professionals are better known for taking risks than avoiding them. That includes his campaign manager, Kory Teneycke, a former communications director for Stephen Harper with a proclivity for hyper-aggressive messaging. Recent recruits such as Mr. Teneycke are battling for Mr. Ford’s ear with a crowd that has been in his orbit for longer. Led by campaign chair Dean French, a Ford family friend, those advisers seem more inclined to “let Doug be Doug.”

How much to let Doug be Doug cuts to the most important player: the leader himself.

Mr. Ford’s personality, based on talking to those who have worked with him, is very at odds with playing it safe. He considers himself a strong communicator and itches to speak unscripted; he likes back-and-forths with media and feeds off crowds at rallies he insists on doing almost daily. But he knows very little about provincial government, has unpredictable policy views, is prone to boastfulness, and has a tendency to get unappealingly vicious toward his enemies.

If normal political wisdom would dictate suppressing all that, a case can be made that his impulses worked well enough in helping build the Ford brand that the Tories should just ride them. Perhaps enough Ontarians really are so angry toward the perceived “elites” Mr. Ford is fond of railing against that he should channel that anger and strike the sharpest possible contrast.

At the moment, he seems betwixt and between. Sometimes he makes such a visible effort to smooth his rough edges he comes off almost passive. But he goes off script just enough – most bizarrely, so far, by claiming no politician has done more for black Canadians than he and his brother Rob – that his team seems doomed to spend most of its time putting out fires. And, perhaps in hope of sating his appetite for straight talk, he is occasionally being fed lines like the one this week that get him off his supposed strategy for days.

It’s unclear what impact the ensuing fracas had. Maybe Ms. Wynne’s reaction mostly reminded voters they’re tired of her. (A subplot that emerged late Friday, in which her campaign chair co-chair apologized for calling Mr. Ford “a bit of a dick” on TV, probably didn’t help her on that front.)​

But she needs to take some chances. Her opponent doesn’t, unless the Tories decide that trying to make him be something he’s not is the biggest risk of all. 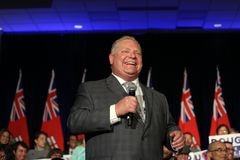 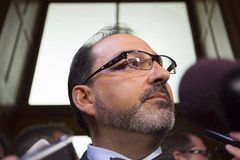 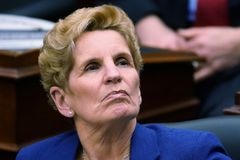