The opportunity for Andrea Horwath’s New Democrats is so glaring, heading into this spring’s election, that they are already being accused of missing it.

Ontario’s Liberal Premier, Kathleen Wynne, can’t seem to improve her dismal approval ratings. The Progressive Conservatives are now led by Doug Ford, the rare opposition leader to start the job already disliked by a large chunk of the electorate – this after the Tories ousted their previous leader over sexual-misconduct allegations, and declared their party full of “rot.”

What an indictment, pundits and fellow members of the left lament, that Ms. Horwath has been unable to draw attention to herself as an alternative.

It’s not a rush to judgment, exactly, because she has twice before proved unready for the spotlight. Her first campaign at the NDP’s helm, in 2011, was underwhelming. Her second, in 2014, was such a mess – the NDP was woefully unprepared for an election it triggered by bringing down a minority government – that it’s a wonder New Democrats did not replace her afterward.

But this time, Ms. Horwath really has not blown it yet. In a province with limited bandwidth for provincial politics, it’s often hard for third-party leaders to get attention before a campaign begins. It’s next to impossible when the Official Opposition stages such a compelling soap opera that even the government struggles to elbow its way into the news cycle.

Ms. Horwath has previously proven it’s possible to get elbowed out once the race has started, too. But for the past couple of years, her new campaign team has been putting together a strategy to prevent that from happening a third time. It essentially involves making the Liberals look irrelevant, treating a change in government as a foregone conclusion, and telling voters New Democrats can offer a more hopeful change than the Tories.

To some extent, that strategy will be evident this coming week, when the NDP releases its full election platform.

In Ms. Horwath’s previous two campaigns, she attempted to assuage voters’ fears of NDP radicalism by running on an unambitious centrist agenda. The Liberals responded, especially in 2014, by campaigning to her left. Combined with their greater chance of beating the PCs, that allowed them to present the contest as between their party on one side and the Tories on the other, with the NDP a wasted vote.

This time, Ms. Horwath is trying harder to own her side of the spectrum. She has already announced pharmacare and dental-care plans more expansive than those of the Liberals; her daycare pitch, to be detailed in the platform, will also be more expansive. Tax increases for corporations and the rich will be offered as a way to spend more than the Liberals would, without more deficit.

It’s not unimaginable that this strategy will contribute to a role reversal. If the New Democrats can pull enough progressive voters behind them that polls suggest Ms. Horwath has at least as good a chance of stopping Mr. Ford as does Ms. Wynne, it could be the Liberal vote that collapses, and the NDP that is head-to-head with the Tories.

That would at least set the NDP up for a second-place finish, its best in Ontario since last century.

Their research, they say, suggests more PC-leaning voters are accessible to them now than Liberal-leaning ones – people certain the Liberals are done, but uncertain what should replace them.

Here, the platform could again be helpful, with the NDP’s willingness to provide detail and full costing potentially showing greater seriousness than Mr. Ford’s disinclination to provide either.

Tone would matter more. The New Democrats know that if anger is the primary emotion driving voters when they cast their ballots, Mr. Ford will win. If there is a desire for something more optimistic, they think, Ms. Horwath could tap into it.

The aim, then, will be to present her as sunny and forward-looking, in contrast to a darker Mr. Ford. That would also be something of a contrast to the way Ms. Horwath presented herself in the previous campaigns, when the Hamiltonian branded herself the “Steeltown Scrapper” and spent much time talking angrily about cost-of-living pressures.

The upside of Ms. Horwath being marginalized in those previous campaigns, perhaps, is that few Ontarians formed strong impressions of her. She can be reintroduced, which the NDP will attempt through advertising it insists will be better-funded than in previous campaigns.

It’s possible to overthink all this. Many voters could simply decide they can’t stand either Ms. Wynne or Mr. Ford, and that, while not crazy about Ms. Horwath, can live with her.

Or maybe none of the fancy strategic calculations will make much difference, because Ms. Horwath still is not personally ready to be compelling or premier-like on the trail.

She hasn’t given much indication previously that she will be. But we’re only just about to find out whether she can make the most of her last, best chance. 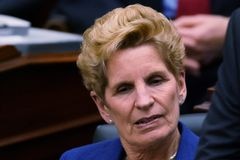 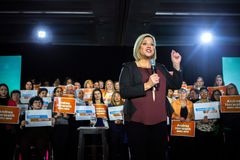 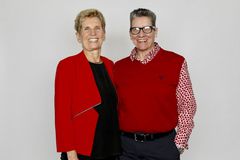