As the number of new coronavirus infections in Canada continues to fall, a similar phenomenon is unfolding in many other parts of the world, leading experts to try to better understand why COVID-19 cases are plummeting right now.

Stronger public-health measures, stricter adherence to the rules borne out of fear of faster-spreading variants, and the natural seasonality of coronaviruses could all be playing a part, observers say. In countries with relatively high rates of vaccination and infection, such as the United States and Britain, immunity could also be starting to slow the spread.

In the past six weeks, the number of new coronavirus infections reported globally has dropped nearly by half, from about five million the first week of January to about 2.7 million last week. Worldwide, overall daily case tallies are the lowest they’ve been since October, according to the World Health Organization.

“We need to understand what is driving those transmission dynamics,” Mike Ryan, head of the WHO’s health emergencies program, told a news conference Monday. “Is it the natural seasonality and wave-like pattern of the disease? Are we building a level of immunity in the population that’s preventing the disease finding the next case? And are control measures having an impact on that? I think all of the above, to an extent, are true.” 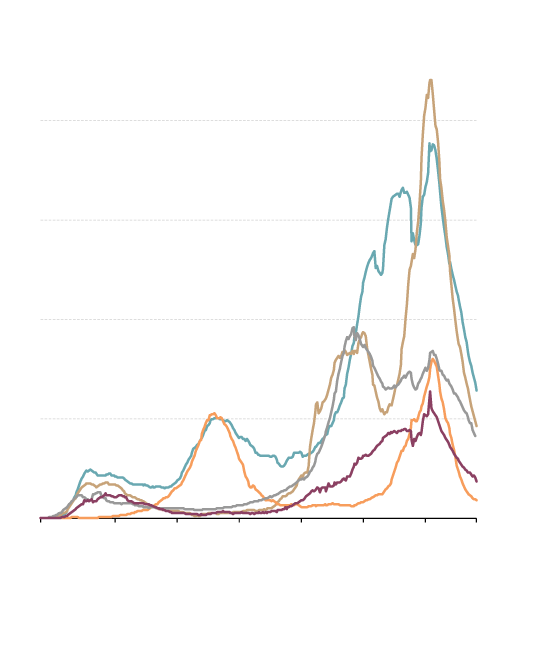 the globe and mail, Source: Our world in 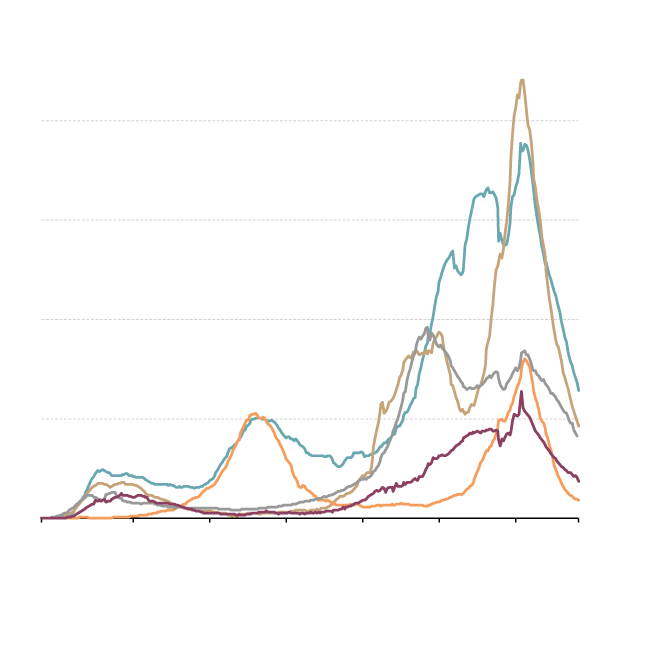 the globe and mail, Source: Our world in data via 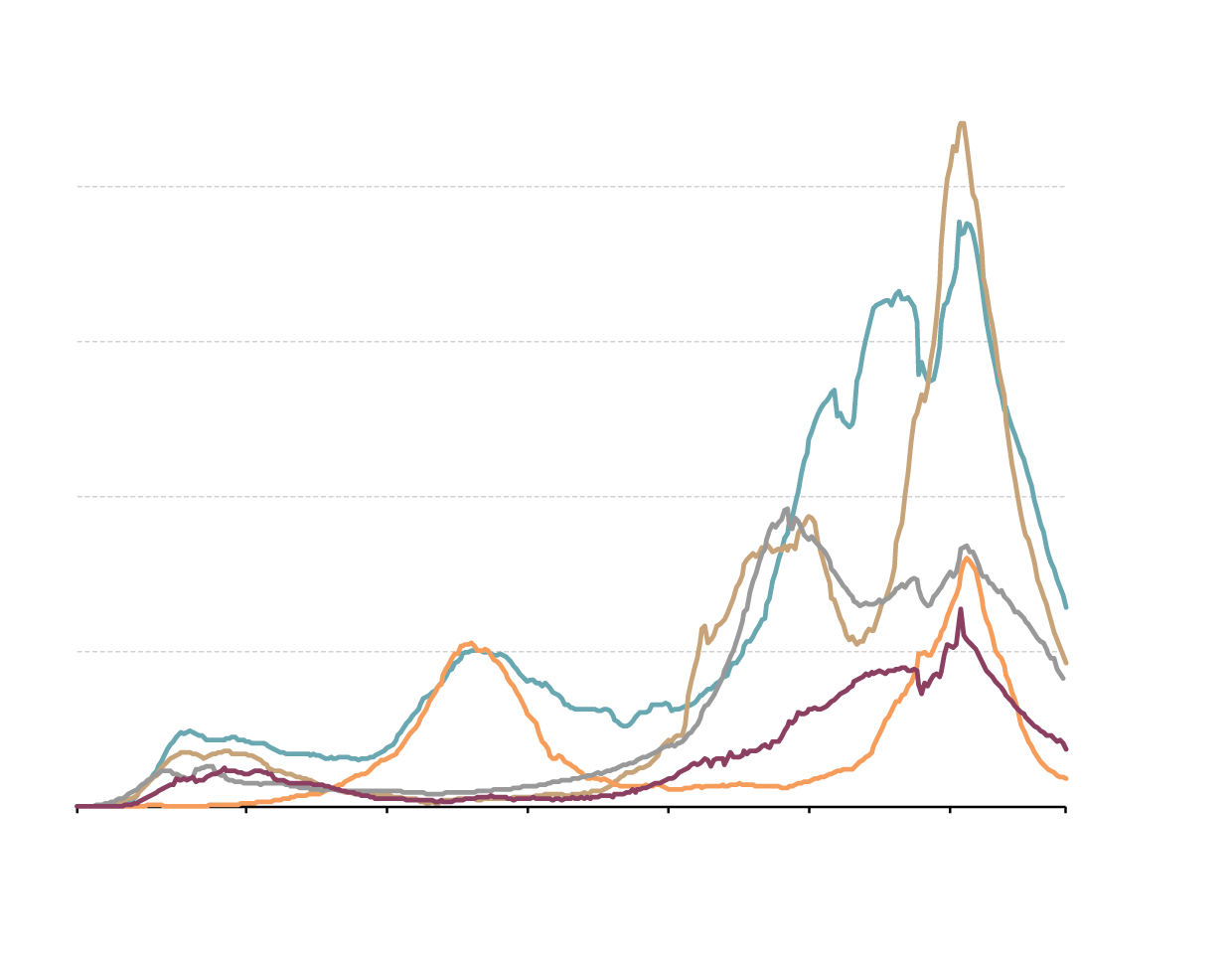 the globe and mail, Source: Our world in data via Johns Hopkins

As scientists seek to decode the downward trend in overall cases, they are doing so against the backdrop of an increase in infections caused by more contagious variants of SARS-CoV-2 that threaten to usher in a third wave of the pandemic.

“The problem that we face is that when you get a drop like this, you start to see relaxation of measures,” said Gerald Evans, chair of the division of infectious diseases at the medical school at Queen’s University. “That puts you at risk.”

One explanation for the drop in cases is easy to spot by comparing the case curves of countries that celebrate Christmas. Lay the charts on top of one another and their winter peaks converge around Jan. 10 and Jan. 11, two weeks after families and friends gathered for the festive season, whatever the rules were in their respective countries.

The heights of those peaks differ wildly from place to place, but Canada, the United States, Britain, Ireland, South Africa, Brazil, Russia and most of Europe saw a post-holiday surge, followed by a reduction in cases. (The post-holiday spike isn’t as striking in large European countries, including France, Italy, Spain and Germany, where cases also peaked at high levels in late November and early December.)

In countries where the Christmas and post-holiday surges were particularly steep, governments imposed stringent public-health measures that led to an equally steep drop in cases. That was especially true of Britain, Ireland and South Africa, three countries where new, faster spreading variants of SARS-CoV-2, the virus that causes COVID-19, have displaced an earlier version of the virus.

“They had huge, strict lockdowns and responses. And I think that people were terrified about these new variants,” said Ian Michelow, a pediatric infectious-diseases physician and professor at Brown University who is originally from South Africa. “That’s a spectre that’s pretty concerning for people, and rightly so. There’s no question about it. These are more dangerous viruses [because] they spread more easily.”

Another piece of the puzzle could be the natural seasonality of SARS-CoV-2, said Matthew Binnicker, director of clinical virology at the Mayo Clinic in Minnesota. The four seasonal coronaviruses, which cause mild colds, tend to peak in winter and early spring, according to six years of Mayo Clinic data published as a brief last summer.

“We knew that this winter was going to be extremely difficult, because [SARS-CoV-2] is a respiratory virus, like flu, like other coronaviruses,” Dr. Binnicker said. In the Northern Hemisphere, influenza usually rises in December, peaks in early- to mid-January and falls off by mid-February. “And that’s really what we’ve seen with COVID,” Dr. Binnicker said.

Untangling all the reasons respiratory viruses tend to thrive in the winter can be tricky. SARS-CoV-2 has been shown to survive longer at colder temperatures. Dry air keeps viral particles aloft longer, making them easier to inhale. Some studies have suggested that breathing cold, dry air affects the mucus membranes in the nostrils in a way that lowers their defences against viruses.

But Peter Juni, scientific director of Ontario’s COVID-19 science advisory table and a professor of medicine and epidemiology at the University of Toronto, says the likelier explanation is that when the weather turns cold and dark, people gather in poorly ventilated indoor spaces where respiratory viruses spread easily.

Crediting a seasonal effect for the drop in COVID-19 cases, he said, is “a pipe dream.”

So is the idea that immunity – whether through vaccination or infection – is making it harder for the coronavirus to find Canadian victims, Dr. Juni added.

With only 3.4 vaccine doses injected for every 100 Canadians and fewer than 900,000 infections confirmed in Canada since the start of the pandemic, the vast majority of Canadians remain susceptible to the coronavirus.

In the United States, however, “it’s possible,” that immunity is contributing, at the margin, to the drop in cases, especially in cities that suffered devastating surges in previous waves, said Jennie Lavine, a biologist at Emory University in Atlanta. “That’s not what I would place my money on, but it’s not inconceivable.”