From his home on the Stellat’en First Nation in B.C., about 160 kilometres west of Prince George, David Luggi can usually see the nearby Fraser Lake and trees on the shoreline.

On Sunday, those landmarks were hidden, shrouded by wildfire smoke that has blanketed much of B.C. and spread through neighbouring Alberta and beyond. The smoke has pushed pollution in Calgary and other cities to dangerous levels, and cast an unsettling, spooky haze over almost every part of B.C.

“We’ve got a kilometre, maybe a kilometre and a half, of visibility,” Mr. Luggi said Sunday in a telephone interview from his home, which is in an area under evacuation alert due to the Shovel Lake fire.

“Normally, you’d see the lake, the trees and the mountains in the distance," Mr. Luggi said.

Such unfamiliar scenery has become the norm in recent days in B.C., which declared a state of emergency on August 15 in response to nearly 600 fires burning around the province. The fires have resulted in evacuation orders and alerts affecting thousands of people.

The smoke, meanwhile, is causing health concerns and traffic warnings.

Metro Vancouver and the Fraser Valley are under an air quality advisory, with people with medical conditions advised to postpone strenuous exercise. Environment Canada on Sunday issued a similar advisory for Calgary. In the Okanagan, two triathlons were cancelled as a result of poor air quality. Remaining races for the Super League Triathlon and the Kelowna Apple Triathlon were cancelled Sunday, with organizers citing health concerns for athletes.

In Kamloops, organizers cancelled Overlanders Day, a family festival with music and sporting events, due to poor air quality. The event had been scheduled for Sunday.

Daylight driving conditions have turned night-like, with the BC Wildfire Service on Sunday warning that cool overnight conditions combined with wildfire smoke resulted in an inversion - a temperature shift that can trap pollution near the surface - near Vanderhoof and telling drivers to “turn your headlights on and drive to the conditions.”

The state of emergency, initially set for 14 days, can be extended or rescinded depending on the circumstances. But as fires continue to rage and forecasts call for more hot, dry weather, it seems unlikely skies will clear.

“In terms of weather conditions, it seems that things are remaining pretty static right now - with very dry conditions out there. But no lightning in the forecast, no major wind events, but unfortunately no rain either," BC Wildfire Service spokeswoman Kyla Fraser said.

“That would really help alleviate the situation - a prolonged period of rain. But that’s unfortunately not in the forecast for the next couple of days,” she added.

At the Ehattesaht First Nation, councillor Tim Johns on Sunday was clearing brush near his home, taking precautions in light of a wildfire burning in nearby Zeballos, on the west coast of Vancouver Island.

His asthma had been acting up, which he blamed on the smoke, and he’d been using an inhaler more often in recent days.

In Port Alberni, also on Vancouver Island, some tourists were cancelling bookings with Lady Rose Marine Services, a ferry service that provides charters and shuttles kayakers to the Broken Group Islands in Pacific Rim National Park.

“We do get impacted. A couple of years ago, we had another fire out here and it was the same thing,” said Jennifer Snider, an employee with Lady Rose Marine.

On Sunday, Port Alberni looked as if it was fogged in “because the sun is just not making much of an appearance,” she said.

The Canadian Army on Sunday said through its Twitter account that soldiers were helping with clean-up efforts for the Gottfriedsen Mountain fire, west of Kelowna, so that expert B.C. firefighters could focus on more specialized issues. An evacuation alert for that fire, which had been in place since August 9, was rescinded August 18.

Following a request from B.C., the federal government on August 13 said it would provide about 200 armed forces personnel to help fight wildfires in the province.

As of Friday, about 190 people had been deployed, a Canadian Armed Forces spokeswoman said in an e-mail. 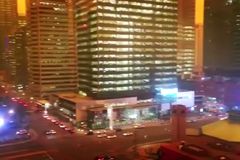 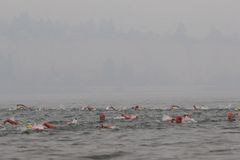 Heavy smoke from B.C. wildfires may have contributed to death of Calgary woman while hiking in mountains
August 19, 2018 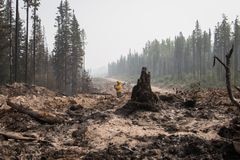