The sport fishing season on B.C.’s coast is gearing up this month, and the Gitxsan Nation in northwest B.C. says it will enforce its own laws, forbidding sport fisherman from accessing the Skeena River within its traditional territory.

As B.C. and Canada seek a resolution to the Indigenous rights and title issues with the Wet’suwet’en in the valley next door, the Gitxsan hereditary chiefs are asking the two levels of government to sit down with them to avoid a possible confrontation over fisheries this year.

The Skeena is an international destination for anglers seeking its steelhead and salmon, but the Gitxsan want the province to stop issuing permits for sport fishing, and warn that fishermen will be treated as trespassers within their traditional territory, which spans 33,000 square kilometres.

“They’re breaking the law by playing with fish, we don’t play with fish, it’s against our culture,” Chief Brian Williams, who also takes the name Simogyat Gwiiyeehl, said in an interview. “When we go fishing, we fish for a reason, and that’s to put food on our table.” He said they are prepared to seize fishing equipment from anglers who won’t respect their ban.

The Gitxsan have, at least since 2014, issued annual declarations about their fishing rights, but the federal Department of Fisheries and Oceans and B.C.'s Ministry of Forests, Lands and Natural Resource Operations (FLNRO) have so far only agreed to talk. As the Wet’suwet’en pipeline dispute erupted into national solidarity protests, however, Chief Williams hopes that they will find some renewed willingness to recognize their rights.

Chief Williams chairs the Gitxsan’s Crisis Management Meeting, which meets monthly to deal with fisheries issues. The province and the federal government routinely send representatives, but he said the players change regularly, “so we’re constantly teaching these people what our culture and our laws are all about.”

Both levels of government have responsibilities – the federal government manages the ocean-going salmon, while B.C. manages freshwater fisheries including steelhead, trout and char. Recreational fishing licences for freshwater fish in B.C. are authorized by the province. Fisheries and Oceans Canada (DFO) determines the timing, quota and methods for freshwater salmon fishing.

The province maintains that the anglers’ licences it has issued remain valid, and that there are enough fish in the water to support recreational fishing in the Skeena watershed. In response to the declaration of the Gitxsan, however, it is advising sport fishermen to “respect First Nations rights and perspectives and seek permission before crossing Indian Reserve lands.”

But those reserve lands amount to a small fraction of the Gitxsan’s laxyip, or traditional territories. And, it ignores the question of whether the Gitxsan have the right to determine who can fish on the Skeena within their traditional lands.

David Haslam, a spokesman for FLNRO, said in a statement that ministry staff are working with the Gitxsan “to understand the collective concerns and see what can be done together." He added: “While the stock assessments at this point in the season for steelhead, trout and char indicate that the regulated recreational fishery can be supported, the stronger downward trends in salmon are deeply concerning.”

DFO officials did not respond to requests for comment, but did provide 2020 stock assessments that predict low sockeye and chinook returns, but healthy coho, pink and chum returns.

The Gitxsan say they have no reason to trust the government numbers on fish returns, and will press ahead to enforce their laws.

“Fish guiding outfits are still bringing clients into the area and sports fisherman are still trespassing," he said. "Any confrontations we’ve had with fisherman, results in them leaving the area peacefully. Sports fisherman from all over the world come here ... and we do want them to understand our laws and understand that they cannot break the Gitxsan law by catch and release. With low fish counts, it’s a bigger crisis now than it has ever been.” 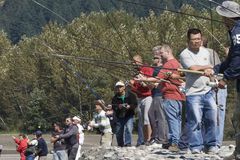 B.C. lands $500-million a year from sport fishing
November 18, 2009
Freshwater sport fishing a $500-million catch for B.C.
November 17, 2009
Follow Justine Hunter on Twitter @justine_hunter
Report an error Editorial code of conduct
Due to technical reasons, we have temporarily removed commenting from our articles. We hope to have this fixed soon. Thank you for your patience. If you are looking to give feedback on our new site, please send it along to feedback@globeandmail.com. If you want to write a letter to the editor, please forward to letters@globeandmail.com.
Comments