The manufacturer of clothing donation bins used by charities across Canada said Tuesday it has stopped producing the metal containers, which were involved in at least two recent deaths, while it works on coming up with safer designs.

RangeView Fabricating, a Toronto-area company that produces bins used by prominent charities such as Diabetes Canada and B’nai Brith, said it is now focused on modifying the existing containers to improve safety.

Manager Brandon Agro said that charities had not experienced problems with the bins for most of the 25 years Rangeview has been providing them. But with at least eight documented deaths in Canada since 2015, including the death of a woman in Toronto on Tuesday morning, Agro said the time had come for immediate action.

That action, involving modifications to current designs and an active search for new ones, may require charities to sacrifice some anti-theft measures and focus on protecting vulnerable populations, Agro said.

“We’re kind of saying to our charities, ‘you’re going to have to deal with the theft because public safety is number one,“’ Agro said in a telephone interview. “If someone is going to go into your bin and take your product, that’s going to have to be how it is for now.”

Agro said the bins most commonly involved in deaths are mailbox-style designs with an internal flap preventing people from reaching inside.

He said the designs feature metal bars that create a “pinch point” when activated, often by people trying to get into the boxes.

Agro said Rangeview is advising charities to remove those bars for the time being until safer designs can be developed and built. While those bars do not exist on all styles of donation box, Agro said the company is focused on improving safety in all styles it produces.

He said mailbox-style bins were involved in two deaths that took place in as many weeks.

On Dec. 30, a 34-year-old man in West Vancouver died after becoming stuck inside a box manufactured by RangeView. His death prompted the District of West Vancouver to seal donation bins and investigate safer options.

Tuesday’s death in Toronto played out in similar fashion, according to city police Const. Jenifferjit Sidhu.

She said officers were called to a downtown Toronto donation bin shortly after 1:30 a.m. when someone reported seeing a woman partially stuck inside the bin, also made by Rangeview.

Sidhu said fire services cut through the box in order to extract her, but she was pronounced dead at the scene. Sidhu said such deaths are especially horrific.

“Part of you gets stuck in there, say it be your neck or a fragile part of you,” she said. “That would be painful, and it would not be quick.”

The woman’s death prompted Toronto Mayor John Tory to write to the city’s licensing committee, which was in the midst of reviewing the clothing dropbox bylaw. Tory asked the committee to include safety as part of that review and to speed up the process.

“I believe the municipal government has a duty to make sure proper rules are in place to make sure the drop boxes in our city are safe,” Tory wrote in a letter to the committee chair.

Advocates for the homeless have been sounding alarms about the bins, going so far as to call them “death traps” for a vulnerable population.

Jeremy Hunka of Union Gospel Mission in Vancouver said homeless people often turn to the bins for clothing items or shelter without being aware of how dangerous they can be.

In addition to the five deaths in B.C., a 32-year-old man was discovered dead inside a donation box in Cambridge, Ont., last November and a man in his 20s died in a similar container in Calgary in July 2017.

“It’s unthinkable, and it’s time to deal with this problem,” he said. “Too many of our guests who would otherwise have a shot at turning their lives around are dying a horrible death inside or hanging out of a bin.”

At least one charity said it’s actively working to retrofit its donation bins to address the problem.

Diabetes Canada announced the move last week and said Tuesday that about 4,000 bins are being retrofitted or modified across the country, with the changes expected to be completed by Jan. 18.

B’nai Brith, operator of the bin involved in Tuesday’s deadly incident, did not indicate whether it plans to revamp donation boxes but described the woman’s death as “terrible and tragic.”

In addition to developing prototypes in-house, he said the company has teamed up with a professor at the University of British Columbia who has tasked fourth-year engineering students with developing designs for boxes that are both safe and theftproof.

Agro said there are broader systemic problems contributing to the string of recent deaths, but said manufacturers and charities must do their part to limit harm.

“We obviously believe there’s a bigger picture to this than just donation bins … causing death and injury to these unfortunate people, but we’ve got to step up our stuff over here and make sure everything’s safer for everybody.” 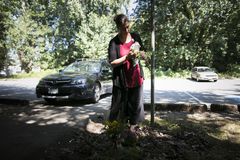